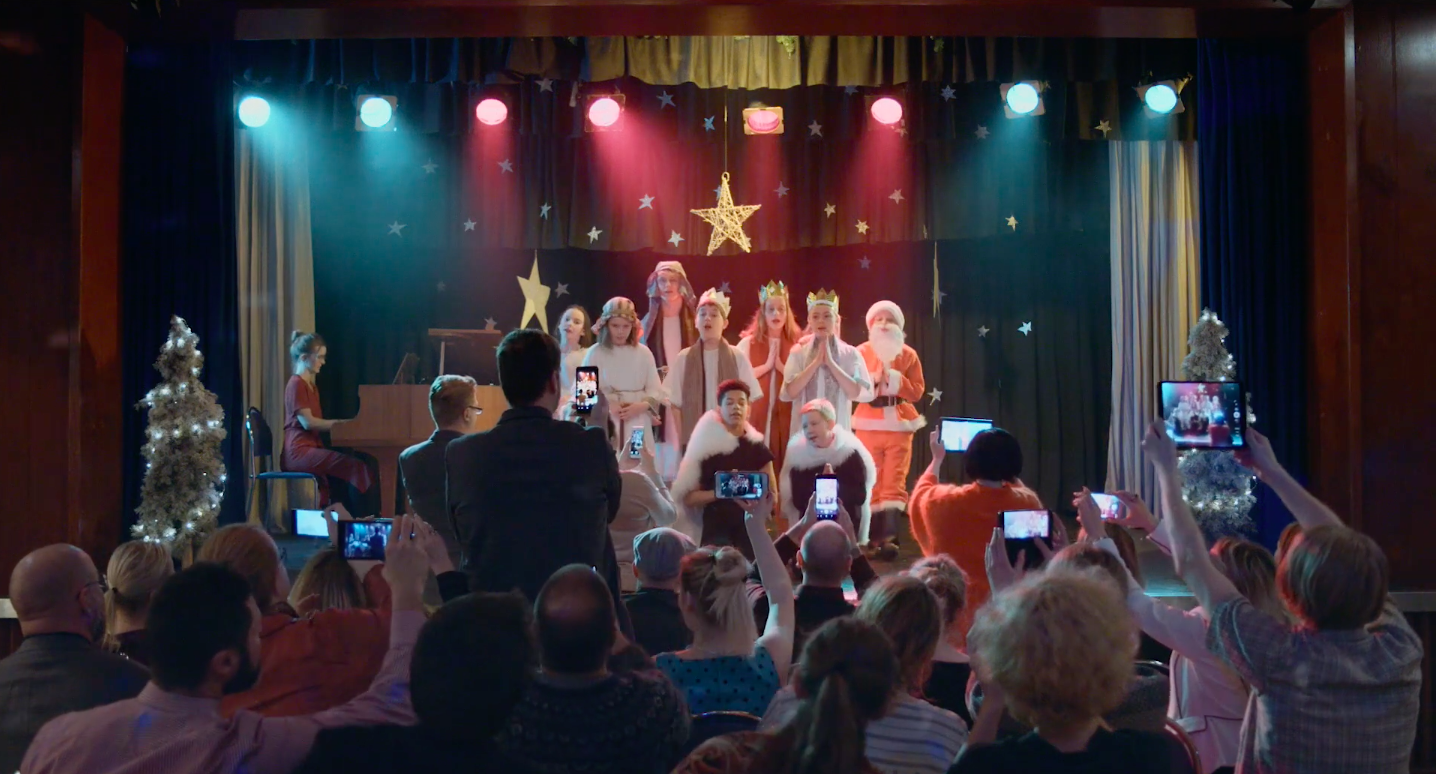 Echo, an Icelandic Christmas Movie from the Aether

This review was originally published in Film Inquiry on January 29, 2021.

Phoebe Bridgers’ new Christmas EP, “If We Make It Through December,” features four incredible, depressing odes to the holidays and loneliness, but the most formally interesting is “7 O’Clock News / Silent Night.” In it, Bridgers and Fiona Apple harmonize “Silent Night” over Matt Berninger’s news anchor readings, a highlight reel of awful stories from 2019 and 2020—including the Sackler family’s complicity in the opioid epidemic, the precarity of abortion law in the U.S., and Trump’s impeachment proceedings. The song layers a traditional Christian hymn on top of startlingly contemporary news stories, at once playfully idiosyncratic and remarkably prescient—living equally in the past, present, and future. That’s something that Echo, an Icelandic film from Oscar nominee Rúnar Rúnarsson, excels at too.

Echo is a short story collection, a series of 56 vignettes, each with different characters and locations, and each presented in one continuous, unmoving shot, usually about a minute long. The film was released in Iceland in 2019, but it only started streaming on MUBI in 2020, and something about that vignette style really seems to serve our moment better than more conventional storytelling. The film reminds me of the Cinetracts ’20 project, which combines 2-minute shorts from 20 filmmakers from around the world, from Syracuse to Serbia, as each filmmaker reflects on the year’s events and sheds light on a different country’s struggles. You’re reminded simultaneously of the differences between our cultures and politics but also of the love, beauty, and challenges we all have in common.

Rúnarsson’s film is slow, thoughtful, and ethereal, all deep breaths and eroding time. Cinematographer Sophia Olsson’s shots are stagelike in their blocking and composition, with little use of the foreground and as much of the setting in the frame as possible. The film has no closeups, instead letting the viewer find their way around the image. In the same way, there’s no obvious rhyme or reason to the editing between stories or even the meanings of those stories. On Christmas Day, a single man listens to Radio Reykjavik and has a glass of red wine and a microwaved holiday dinner, and he seems to enjoy himself well enough, so you’re left to suss out what emotions and what tone Rúnarsson is conveying and how it fits into his larger mosaic.

In Echo, the editing seeks out connective tissue, both semiotic and in terms of story. A children’s nativity play cuts to a swimsuit modeling competition. We cut from rows of meat on hooks at a butcher’s shop to rows of Christmas trees in a tree store, suspended from the ceiling by ropes. In one scene, a worksite boss arrives at his construction zone to find that most of his workers have gone on strike; in the next, a man sharpens tools in his shed, listening to a woman on the radio discuss those same labor strikes. There are tense Monopoly games and sheep having sex, burning farmhouses and dead children. I could spend the entire review recapping every brilliant, breathtaking scene in the film, but I won’t. We’d be here all day. If I knew anything about Icelandic politics, I might be able to speak of the film’s treatment of these themes in its vignettes, but I know nothing about that. The scenes of labor strikes, nursing homes, and police detaining immigrants probably have a dialectical purpose that I’m just missing altogether. But these scenes contain that same blend of history and modernity that “7 O’Clock News / Silent Night” nails so well. Several scenes focus on gorgeous, lavishly furnished churches. One shot’s in a museum. The scene with the burning farmhouse has plenty of dialogue, mostly focused on the history of the house and its importance to the characters, now vanishing in front of them in flames and a plume of black smoke. Echo uses each scene to paint a portrait of contemporary Iceland on a human level, though it refuses to provide beginnings and endings for its stories, leaving you with fragments of these lives and questions about the future of the country as a whole.

The entire movie’s in this liminal space. Every vignette deals with history, change, and what’s to come—perfect subject matter for Christmas and New Year’s, when all that turkey, wine, and merriment is offset by bitter self-reflection and regret, as well as the reminder that the future is closer than we think. Our first shot, for example, pairs Kjartan Sveinsson’s mesmeric score with a car going through a car wash. From dirty to clean, the car is captured in mid-transformation, just as Echo studies a calendrical and sociological transition in Iceland—Christmas bleeds into New Year’s Eve and tumbles into the new year, but at the heart of the film, one Icelandic culture and way of life bumps heads with the next iteration. A grandma shows her grandson the family funeral plot. Two parents spy on their daughter recording a precisely choreographed Tik-Tok dance. Oh, I’m listing scenes again.

There’s a widely agreed-upon rule of screen direction that Echo breaks in this first shot, the one of the car wash: In visual art, movement left to right is shorthand for progress, kind of mimicking how we read, but in this scene, the car moves from screen-right to left, a kind of regression. The inevitability and nature of change are openly debated throughout all of Echo. At a holiday party, a guest explodes during an argument: “That’s what I hate about this country,” he says. “No debate. No discussion. Everybody’s co-dependent. Let’s agree to disagree. And nothing ever changes!” He leaves the apartment and slams the door. And Rúnarsson lets the moment hang there, as a question. Is Echo about change or our resistance to it?

Most shots have progress, movement, and motion, like our car at the car wash, or the farmhouse burning down. But we also get shots that echo others, like a vignette of babies and their parents doing exercises in an indoor pool, followed much later by a shot of seniors led through the same aerobics lessons. In the new year, we see someone swapping out part of a sign—“15 died this year” from car accidents, it warns, but the worker switches the “15” to say “Nobody.” The new year is full of possibilities. (In that new year, 2019, Iceland only reported six road deaths.)

Echo doesn’t give its audience straightforward answers, but it doesn’t ask straightforward questions. It is, to me, the best film of the year, because of that uncertainty, amorphous meaning, and kaleidoscopic storytelling. It offers a kind of diagonal empathy that’s refreshing and valuable in 2020, that ability to connect with people you’ve never met in a country you’ve never visited. It’s a tremendous, moving experiment in perspective. It’s short, too—a brisk 80 minutes, lasting about as long as it takes a piping hot cup of tea to get cold. Just enough time to tour Rúnarsson’s holiday vignettes and engage with his characters, who are shot so realistically and glimpsed so briefly that they hardly feel fictional at all.