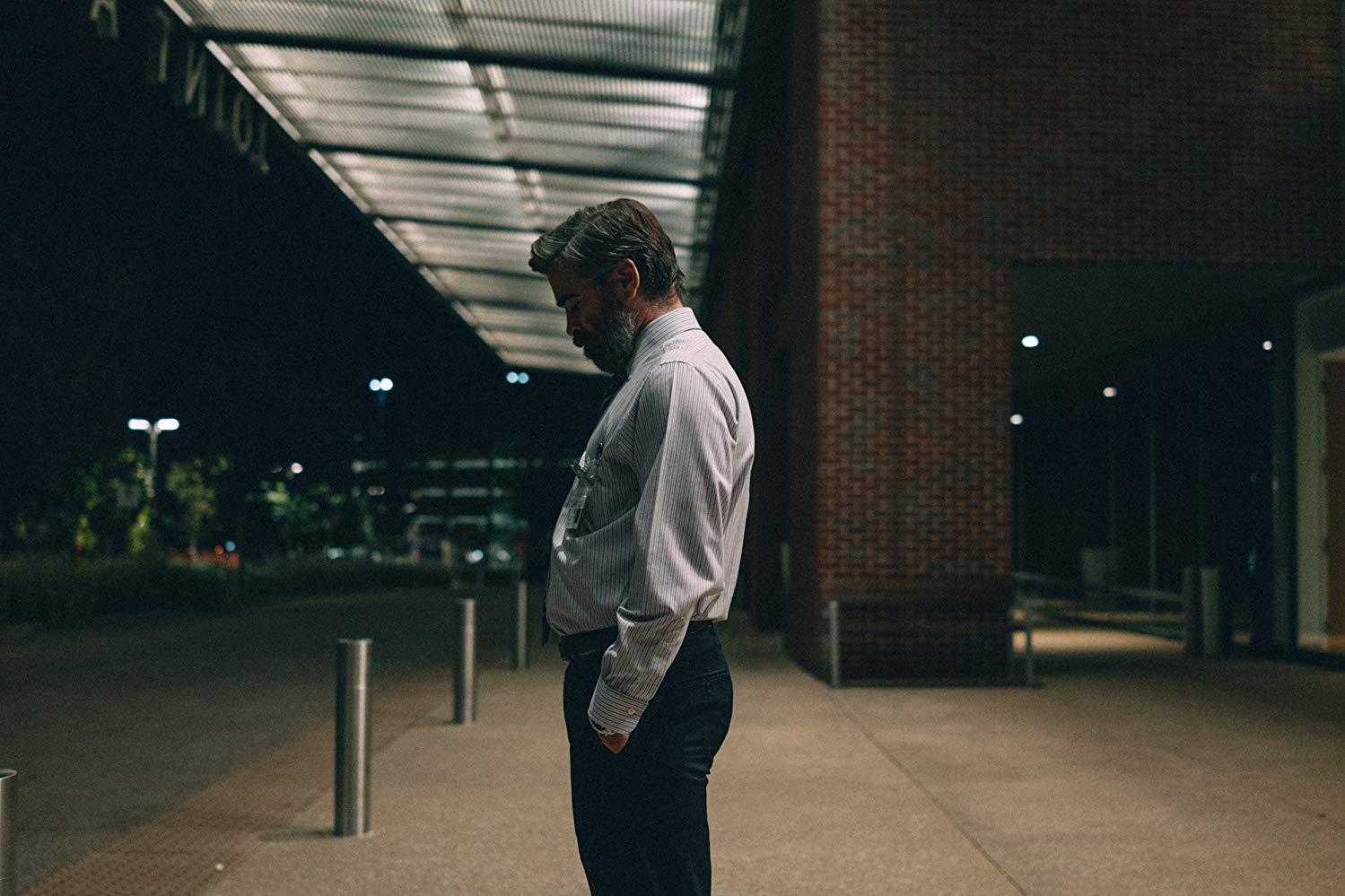 Director Yorgos Lanthimos’ (Dogtooth, The Lobster) The Killing of a Sacred Deer features a disease that immobilizes the legs, causes its victim to refuse food and bleed from the eyes, and eventually brings about death. Anyone wondering how the illness is acquired will be disappointed, as the science behind it is never explained. It may sound frustrating to be kept in the dark about the details of the disease; but, what truly matters in the film is the conflict that it incites. Initially, the story appears to be a simple black-and-white battle with a clear hero, a surgeon named Steven Murphy (Colin Farrell), and a clear villain, a teenager named Martin Lang (Barry Keoghan); but, as we discover more about the two, they take on shades of grey that make them frighteningly relatable.

Years before the film’s story begins, Martin’s father Jonathan Lang is injured in a car crash. Afterwards, he is taken to the hospital for treatment; but he dies on Steven’s operating table. Feeling sorry for Martin, Steven begins meeting with him—usually at a local diner, followed by a walk outside.

When we are introduced to Martin during one of these meetings, he presents a friendly demeanor, but one can feel that it is masking a sinister disposition. Eerie violin music, reminiscent of a kettle whistling, can be heard whenever the two are taking their walk—and it creates a sense of unease. Later, when Martin comes to the Murphy’s home, per Steven’s request, he takes an interest in Steven’s daughter Kim (Raffey Cassidy) and sometime later, gives her a lift home from choir practice. Upon entering the house, Kim tells Steven how hilarious Martin is, yet her voice is monotone when she says it. Since Kim’s ride with Martin occurred offscreen, one’s imagination is left to speculate about whether or not Martin took advantage of her.

The following day, Steven’s son Bob (Sunny Suljic) is unable to move his legs. While none of the doctors, even those specially flown in to examine Bob, are able to reach a diagnosis, Martin tells Steven that the illness is “An eye for an eye” form of punishment for killing his father. Unless Steven kills a member of his own family, Bob’s symptoms will worsen and the disease will spread to Kim and his wife Anna (Nicole Kidman). Steven soon finds out that Martin wasn’t bluffing: Kim collapses and both children find themselves unwilling to ingest anything. After Anna witnesses Kim temporarily regain the ability to walk while talking to Martin on the phone, she too becomes convinced that he is behind the illness.

Martin’s cold demeanor towards the Murphys makes him seem heartless. When Anna confronts Martin at home before school to tell him that it’s not right for her children to suffer for Steven’s actions, he’s more concerned with finishing his spaghetti breakfast than showing remorse. Having Anna’s face taking up the entire frame while she expresses her grievances draws our attention to the sounds of Martin slurping spaghetti and scraping his plate with a fork. These noises continue when Martin responds to Anna by telling her that Bob and Kim’s illness may not seem fair to her; but, from his point of view, it’s the best way to punish Steven for killing his father. His callousness is, at first, astonishing: how can he eat in front of Anna while her children are unable to do the same? Believe it or not, it will eventually become debatable whether or not Martin deserves sympathy.

Steven goes to great lengths to avoid killing a member of his family. After discovering that Bob hasn’t eaten in a while, Steven tries to force a donut (originally intended as a get-well present) down his throat. Steven’s force-feeding and Bob’s subsequent vomiting are captured in claustrophobic closeups, making the scene extremely unpleasant to watch. As horrific as the sight is to behold, it’s understandable that Steven would want to believe that Martin was lying.

It’s not until much later that we learn that Steven had been drinking before operating on Jonathan, as he is reluctant to confess. Shortly after the disease strikes, Steven tells Anna that Jonathan died during surgery. When she pressures him to tell her whether or not he had been drinking beforehand, he dodges the question by blaming Matthew (Bill Camp), the anesthesiologist who put Jonathan under, saying: “A surgeon never kills a patient. An anesthesiologist can kill a patient, but a surgeon never can.” As time goes on and Bob and Kim show no signs of getting better, Anna decides to further investigate Jonathan’s death by getting Matthew’s side of the story. Not only does Matthew tell Anna that the surgeon, not the anesthesiologist, is usually responsible for a patient’s death, he also reveals that Steven had had two drinks before beginning the surgery. Does Steven lie to cover his tracks or to convince himself that he’s not a murderer? Either way, once Matthew discloses the truth, one begins to wonder whether Steven is looking out for his family’s safety or attempting to avoid taking responsibility for killing Jonathan.

The true horror of The Killing of a Sacred Deer isn’t that Steven and Martin hurt innocent people; but, that their motivations are understandable. Neither character is able to accept Jonathan’s death, so each one copes with it in the manner they best see fit. As Martin tells Steven, he believes that the only way he can relieve the pain caused by losing a family member is making Steven lose one as well. Steven never explicitly states why he force-feeds Bob or scapegoats Matthew; but given his efforts to hide Jonathan’s true cause of death from Anna, he is likely ashamed of what he did—to the point of being afraid to admit it both to her and to himself. As much as I’d love to believe that Steven and Martin were derived from Lanthimos’s imagination, his inspiration may very well have been human nature itself.