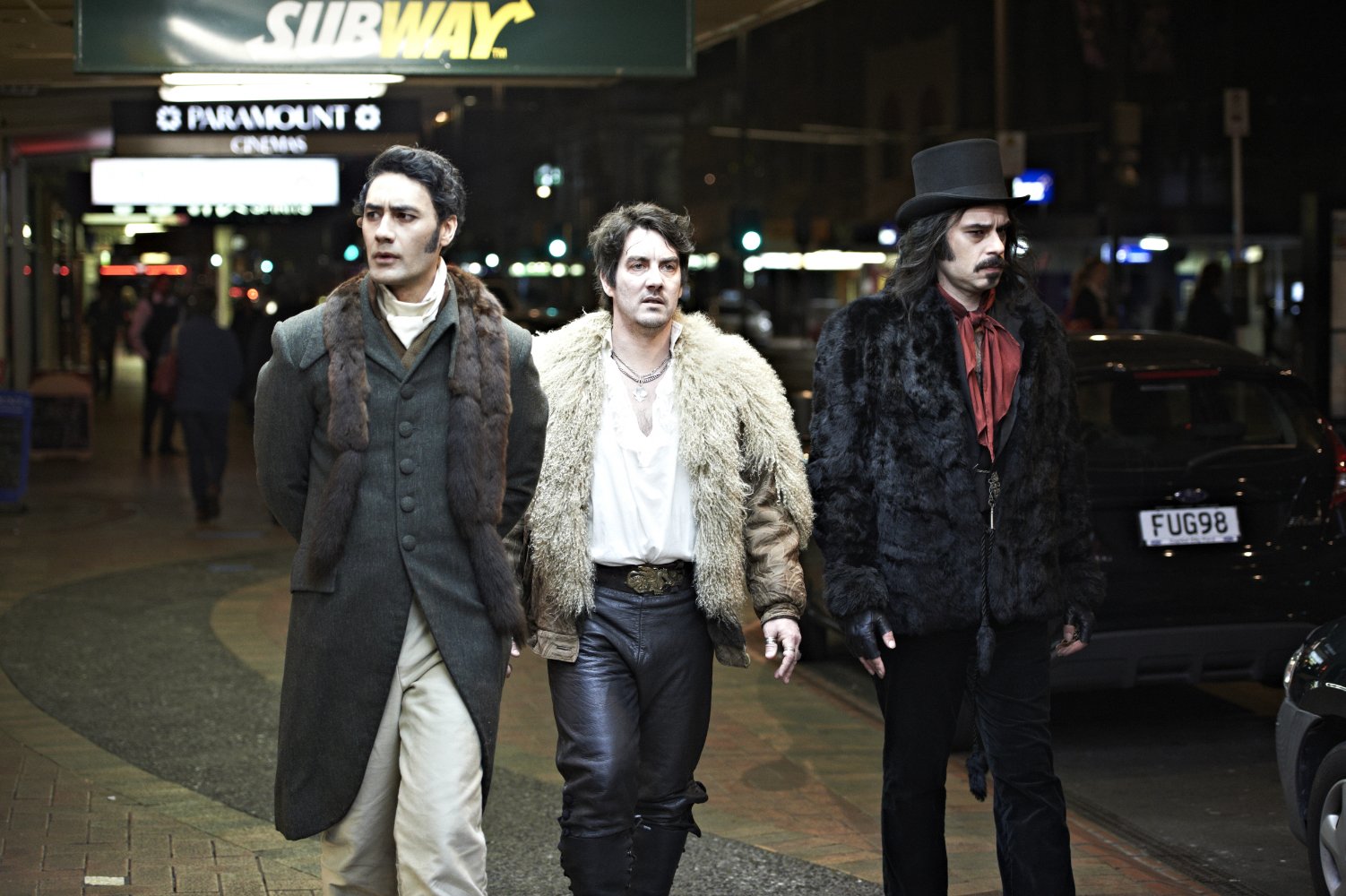 What We Do in the Shadows: The Vampire Life in All of Its Blood, Guts, and Glory

In the Dracula films, we saw vampires seeking out countless victims and in the Twilight saga, we saw them reveal their romantic side. But what do vampires do during their downtime? Taika Waititi and Jemaine Clement explored this question when they co-wrote and co-directed the short film What We Do in the Shadows: Interviews with Some Vampires (2005). In 2014,1 the short was expanded into the feature-length film What We Do in the Shadows and the answers it provides are hilarious.

A group of humans have taken it upon themselves to document the daily lives of four vampires—Viago (Taika Waititi), Deacon (Jonathan Brugh), Vladislav (Jemaine Clement), and Petyr (Ben Fransham)—who share a flat in Wellington, New Zealand. Viago is an easygoing vampire who enjoys the company of his flatmates; Petyr is the quiet one usually residing in the basement; Deacon is a “bad boy” who’s eager to rough things up; and Vladislav relishes in violence. Don’t worry; the vampires have sworn not to attack the documentary crew. Still concerned? Each member of the documentary crew is wearing a crucifix as a precaution.

The vampires behave less like monsters and more like college students who’ve been randomly grouped into a dorm suite. As much as they hang out and go clubbing together, they don’t always get along. There are frequent disputes regarding housekeeping, from deciding whose turn it is to wash the dishes to keeping blood off of the furniture. Beyond enduring typical flatmate issues, however, the characters face a more unique set of problems. Vampire attributes that films tend to exploit for horror are creatively reimagined as inconveniences—throwing on an outfit at the start of the day can be hectic enough, but try doing it when you can’t see your own reflection. These conflicts are all you need to drive this mockumentary, thanks to a strong group dynamic that is only enhanced with the arrival of more characters.

Have you ever had a roommate who was nothing but a burden? That describes Nick (Cori Gonzalez-Macuer) in a nutshell. After becoming Petyr’s latest victim, Nick moves into the flat and quickly overstays his welcome. During a night out in the town, Nick tells everyone that he’s a vampire, which attracts the attention of a vampire hunter—creating yet another worry for the vampires. As despicable as Nick can be, he adds necessary heart to the story by demonstrating firsthand the hardships of becoming a vampire. The documentary crew captures Nick being bitten and its aftermath: we witness his devastation as he not only realizes that his life has been cut short, but also discovers that in order to survive, he has to remain indoors during the day and consume blood during the night.

Stuart Rutherford, portraying the character of Nick’s friend Stu, is a scene-stealer. There’s nothing supernatural about Stu—a mere software analyst—but Rutherford’s down-to-earth performance stands out amidst the more eccentric performances of the other actors. Rutherford was given no lines and minimal direction, leading to some priceless genuine reactions. Even though Stu usually resides in the background, the camera will focus on his various befuddled expressions.

By this point, you are probably wondering where your local vampire is so you yourself can gain immortality. While I cannot answer that question (for better or for worse), I can tell you what this film has in common with its short film predecessor.

I saw What We Do in the Shadows twice before checking out the original short. When I finally saw it, I was fascinated to discover that the feature-length film is essentially a big budget remake of What We Do in the Shadows: An Interview with Some Vampires (2005). Much of the dialogue, characters, and actors are recycled from the short. Thankfully, enough of the short’s ideas are expanded upon to make the feature feel distinct. Whereas the short primarily consisted of interviews, the feature extensively showcases the vampires’ day-to-day lives, where they engage in activities such as archery. Character backstories are expanded upon with old photographs and paintings, all of which were created for the mockumentary to help illustrate what each vampire was like before, during, and after being bitten.

With a bigger budget, Waititi and Clement are able to realize concepts that weren’t possible in the short film. They were able to construct an elaborate set of a flat that feels less like the standard apartment used in the short and more like a haunted mansion, thanks to the antiquated furniture and the basement littered with bones. Extensive makeup allows Petyr, who did not exist in the short, to bear an astounding resemblance to Nosferatu, one of the earliest interpretations of Dracula in cinema. The mockumentary also features action scenes such as the fight that breaks out between Nick and Vlad. The two end up flying around the flat and pushing each other against the walls. The actors’ fluid movements make it appear as though they are flying, even though wires were holding them up.

Surprisingly, What We Do in the Shadows includes moments of drama, especially when a major tragedy occurs towards the end of the narrative. The screen fades to black and it appears as though the film is ending; but there’s more. The following scene reverses the tragedy—and while it’s satisfying to see everyone get a happy ending, had the film ended on a somber note, it would’ve resonated with me more. A tragic ending could’ve shown that life as a vampire is no better than life as a human, as both are filled with suffering and consequence.

I cannot speak for those who saw the short first, but on its own, What We Do in the Shadows is quite enjoyable. When the film ended, I became eager to see mockumentaries of other supernatural beings, and my wish might just come true. A sequel, entitled We’re Wolves, is currently in development. If it leaves me howling with laughter in the way that What We Do in the Shadows did, don’t be surprised if I disappear every full moon.