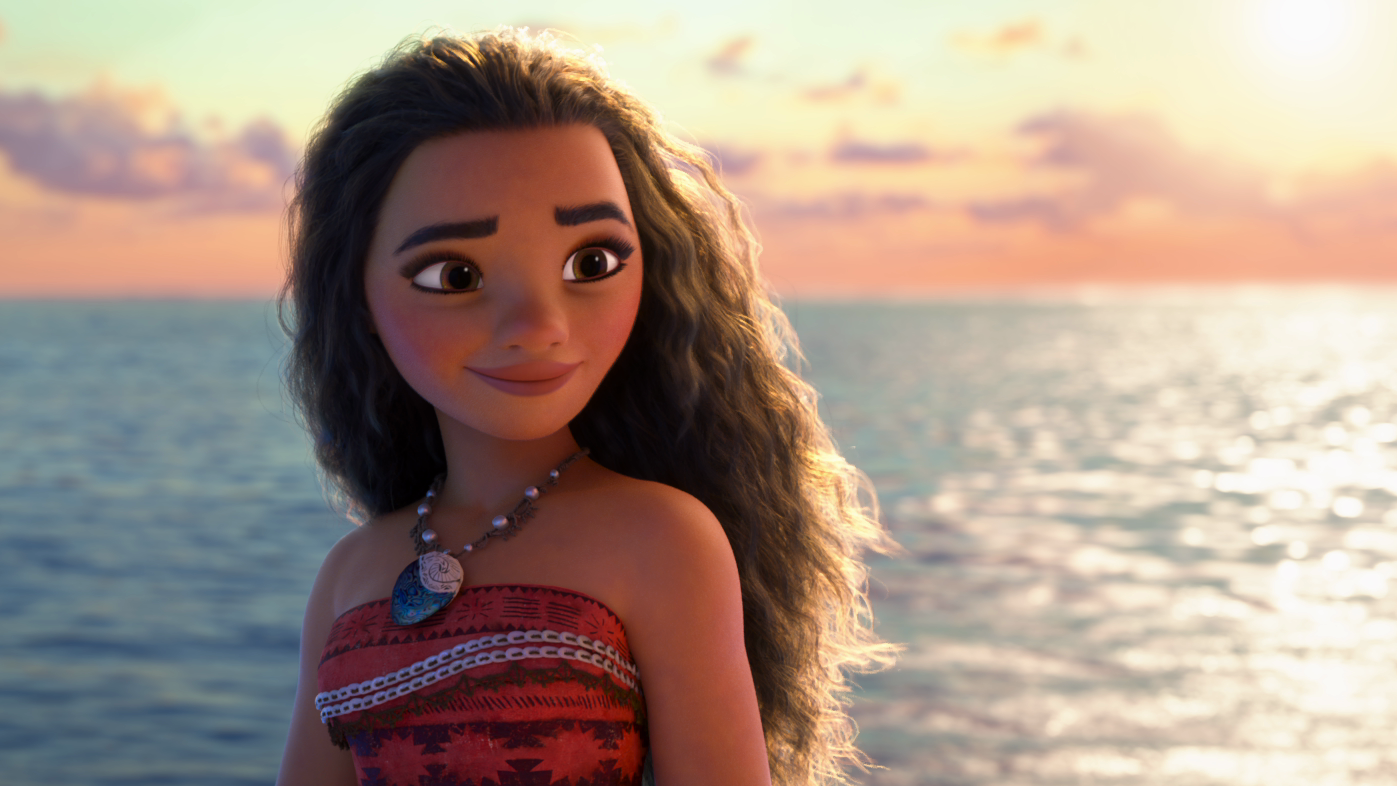 I have been looking forward to seeing Moana for a very long time—ever since I heard it would be coming out—because I am a huge Lin-Manuel Miranda fan and a huge Disney fan. I was excited to see that they were doing a story about an independent princess. When I was little, my mom said that I couldn’t watch Disney princess movies until I was a feminist. I asked what a feminist was, and she said, “It is somebody who thinks women are just as important as men.” I said, “Of course,” and then I watched Cinderella. I thought that it was really cool that all the Polynesian characters in Moana would be played by actors of Polynesian descent. But when I saw Moana, I didn’t just love it because it is groundbreaking. It is funny, has amazing music, and is really inspiring.

The story of the movie is that there is a girl from an island who is the next in line to become the chief, and her name is Moana (Auli’i Cravalho). She was chosen by the ocean to go on a mission to return the heart of an island and goddess—Te Fiti, who was kind of like Mother Earth, but Mother Island—to heal all the islands. Her grandma Tala (Rachel House) loved the ocean, but her parents (Temuera Morris and Nicole Scherzinger) were strongly against her leaving. Her grandmother shows her a cavern full of boats, and she sees what her village is really meant to be. The people of her village used to be voyagers, and they shouldn’t be stuck on this island forever. She has to get a demigod named Maui’s (Dwayne Johnson) help. He is a very self-obsessed man and at first they don’t get along very well, but eventually they become great friends and come across a lot of obstacles along the way: from tiny aggravated coconut people, to a giant shiny crab named Tamatoa (Jermaine Clement), to a dangerous lava monster lurking on an island.

Each song had a lot of meaning; it didn’t seem like there were songs just to have songs. The characters were not always bursting into song. It seemed more genuine to me. Even though I could listen to Miranda’s music all day, I think it was better for the story to have some heartfelt scenes as well as heartfelt songs. “How Far I’ll Go” is a very inspiring and heart-wrenching song. It is about being torn about who you want to be, but in the song she does realize who she is really meant to be, or at least who she is meant to be now. It was really beautiful. “You’re Welcome” was my absolute favorite. It was all about how Maui has apparently done so much for the human race, but then he doesn’t know he’s not that much of a hero anymore. And Moana is trying to get her message that he has to come and help her across, but then she gets pulled into all the fun of the song. The melody was so catchy and the lyrics were so clever. There was a line that was “I killed an eel / I buried its guts / Sprouted a tree / Now you got coconuts.” It is so great because it is actual lore put into rap. I loved the way that the animators portrayed the character of his tattoos. There was a little Maui that would bounce from picture to picture and react to the song, the scene, or Moana’s amazing comebacks.

There were a lot of really funny moments. I loved the rooster Heihei (Alan Tudyk). He was such a derpy little soul. He was exactly like a chicken! When he first finds himself on the boat in the middle of the ocean, he realizes it, and the camera zooms out and that is the one moment in the entire movie where he’s actually scared. It seems a lot like paying homage to one of those movies where someone finds themselves in a place they don’t want to be and the camera zooms out to show how loud their scream is, which I found hilarious. He is usually fearless, whatever he’s doing, even if it is walking into the ocean. He is not the brightest bird, not the sharpest beak on the island, but what is so great about him is that he is there to make any situation funny. Even if he is just in the background of the shot, floating away, it is hilarious. He gets himself out of dangerous situations without really having to do anything, like he is floating away in a barrel in one of the last shots of the battle with the lava monster, just very glossy-eyed and looking like nothing is wrong. Another hilarious character was Tamatoa. He was a giant hoarder crab and he was the one who had Maui’s hook. He really loved talking about himself, and he also cared only about his appearance. He needed to have all the shiny things on his shell. I really loved the song “Shiny.” It was sung by one of the members of Flight of the Conchords, which is one of my favorite tv shows/comedy bands. It was written by Lin-Manuel Miranda, who is not a member of Flight of the Conchords, but I think he really embodied their style in this song. The lyrics were so clever, like “I never hide. I can’t. I’m too… shiny!” which I absolutely loved. Tamatoa was such a lovable and evil character at the same time. His song is about how all that matters is how shiny and amazing you look, but that is kind of the opposite of the movie’s message. But you still love him because he is just too hilarious.

It is really great having such an inspiring female character. Moana speaks for what she believes in and she is really powerful. Even when she is facing a demigod, she still won’t stray away from her opinion, which I think is really cool and amazing. She is of course discouraged sometimes. Who isn’t? But she still remains centered. I thought it was amazing that there was no prince. That just shows that you don’t need a man to tell you who you are or who you should be. You should be whoever you want to be. You don’t need romance to have an intriguing story for a female character. The amazing thing is, it is not just the main character that is so powerful. All the other female characters are just as powerful. Moana’s mother helps Moana get packed for her journey even though that is not what her husband wants for Moana. Tala is the village “crazy lady”, as she calls herself. She is powerful because she doesn’t care what people think and she sticks with her opinion no matter what people say. She encourages Moana to go on her mission and helps her along the way, no matter where she is. Te Fiti stands up to a demigod, just like Moana, but it is not that big of a deal for her because she is the size of an island. Women are not just powerful because of how nurturing they are or how much they help each other. They are powerful because of their brains, their rage, their combat skills, and their belief in their own ideas. That is only in the movie; in real life there are so many more I could list off.

People who would like this movie are people who like amazing music, powerful women, and shiny sassy crabs. I thought this was a really awesome and life-changing movie. I really loved it. It is great for everyone—female and male, adults and kids—to see because this movie and feminism are about accepting everyone in the community as equally important.