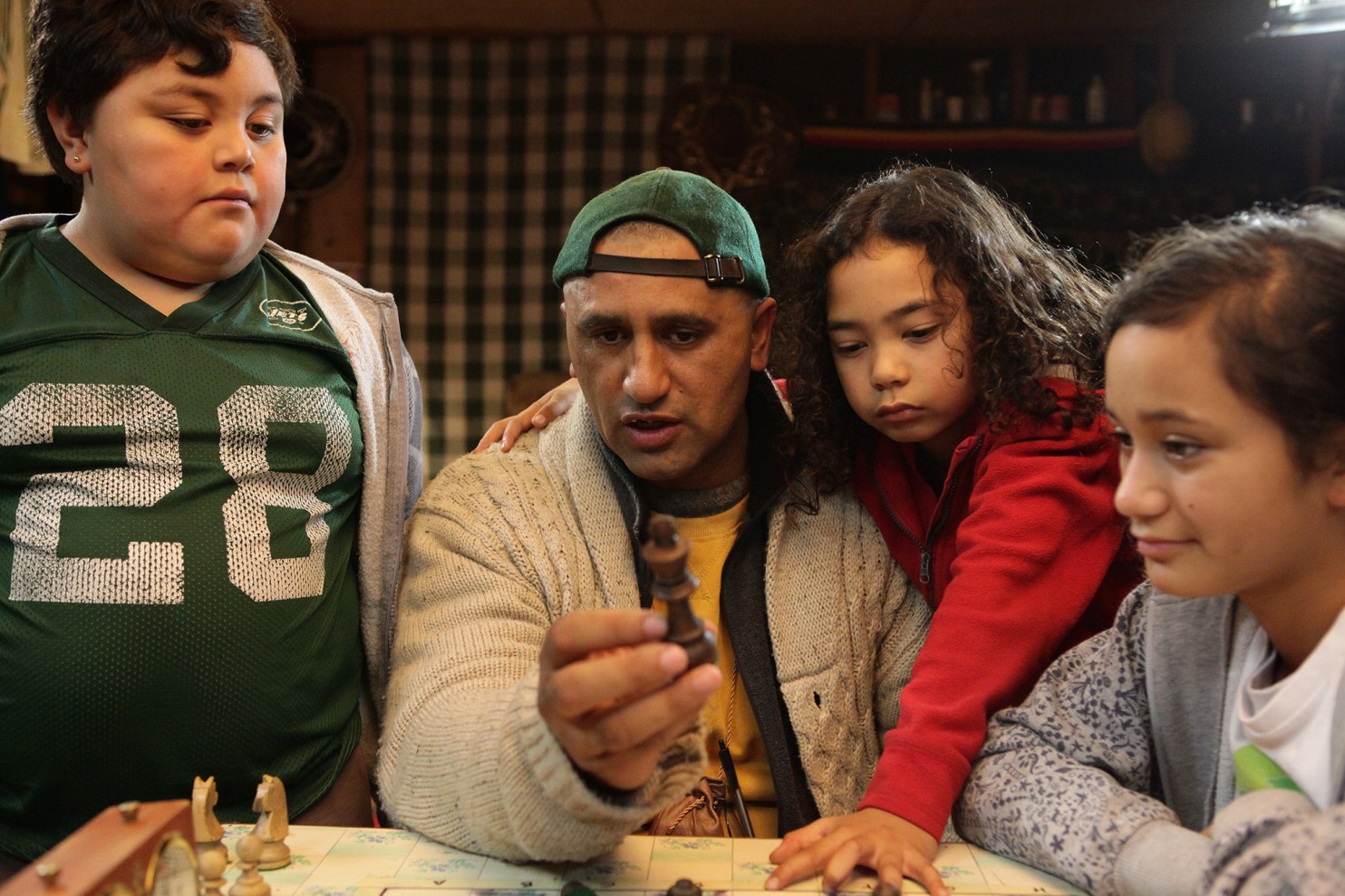 Written and directed by James Napier Robertson, The Dark Horse depicts one man’s endeavor to surmount mental illness and to provide positivity and stability to the Maori children in his community. The movie is based on the true story of Genesis “Gen” Potini (Cliff Curtis), a Maori champion chess player in New Zealand. After being released from a mental hospital at the start of the narrative, Gen goes to the home of his brother Ariki (Wayne Hapi) and his fourteen-year-old nephew Mana (James Rolleston), where Ariki’s fellow gang members are frequent visitors. When Gen sees a flyer for the Eastern Knights Chess Club on a bulletin board, it inspires him to teach the underprivileged Maori children of the club how to play chess and to prepare them for the national chess championship in Auckland.

In the opening scene, Gen mutters, “I’m through, into the light. From the dark into the light.” His words encapsulate the film’s main theme: that light (hope) will triumph over darkness (despair). Throughout the movie, Gen struggles to overcome his mental health issues. There are many shots of him taking his medication and mumbling incoherently to himself. One empathizes with Gen when, at first, everybody believes that it will only be a short time before he has another breakdown and ends up back in the hospital. However, Gen realizes that he has a responsibility to the children of the chess club and that he must take care of himself in order to stay mentally stable. Gen’s opening lines also symbolize how optimistic the children feel after improving their chess skills. These children, whose parents are frequently too involved in their gangs to be present in their lives, need something to be passionate about, and Gen guides them in finding it.

The Dark Horse provides important insight into the difficulties of mental illness and of the Maori lifestyle. Robertson gives the audience a glimpse into the life of someone who suffers from mental illness through Curtis’s brilliant acting and various cinematic techniques. In a few scenes, a mix of music plays in the background while voices repeat words of advice on how to stay healthy, and later, Gen’s own voice repeats what other characters say. These scenes typically take place in a moving vehicle, while various colors whir by; and the camera focuses on Gen’s head as the background blurs with movement so that audience members relate to his abnormal mental state. Moreover, multiple scenes portray Gen as he stares at himself in the mirror, almost as if he is trying to look past his illness to figure out who he is beyond it. The audience also sees how quickly people judge him, how at first, they do not believe he can accomplish his goals.

Additionally, this film addresses the hardships that the Maori face. Young teenagers and the majority of adults in the movie are seen drinking or smoking. Major school budget cuts dismantle the subjects that the children enjoy, making them no longer want to attend school. Viewers are also given a raw look into the tough and violent gang culture to which the Maori are exposed at a young age. The abuse that one must endure to become a gang member is horrific, and the crimes committed by the gangs are awful. After seeing a young boy traumatized when his home is invaded by Mana’s gang, Mana stares at himself in the mirror and questions whether or not he really wants to become an aggressor. Furthermore, the movie addresses how children are frequently products of their environment. For example, when members of the gang mock Mana by telling him that he is scared, Mana angrily accuses Gen of being scared. Viewers also see just how impoverished the Maori children are when they go to the chess tournament and are juxtaposed with the well-dressed Caucasian and Asian students who stare at them. Cinematographically, the Maori children’s dark clothes and skin stand out against the whiteness of the chess room, especially because a lot of the movie is filmed in dimmer light. Despite the negative facets of Maori life presented in the film, the audience also witnesses positive aspects of Maori culture. For instance, Gen tells the children Maori folktales and gives them chess pieces that are shaped like Maori warriors. One value that the children learn from the folktales Gen shares with them is to work together as a community. Indeed, the children work hard together to raise money to go to Auckland, and they succeed. They are seen as a unified chess team, and because most have a difficult home life, they bond as a family.

The Dark Horse causes viewers to empathize with many characters—the Maori children, Mana, and Gen. The film also educates viewers about the issues that both people with mental illness and the Maori of New Zealand face daily. It emphasizes the importance of remaining hopeful in dark times, taking risks even when uncertainties or doubts exist, and of believing in oneself and in others. When you watch the movie, prepare to be intrigued by its plot, to gain an understanding of the Maori people and their culture, to experience what it is like to be mentally ill, and to be moved by its many poignant moments.