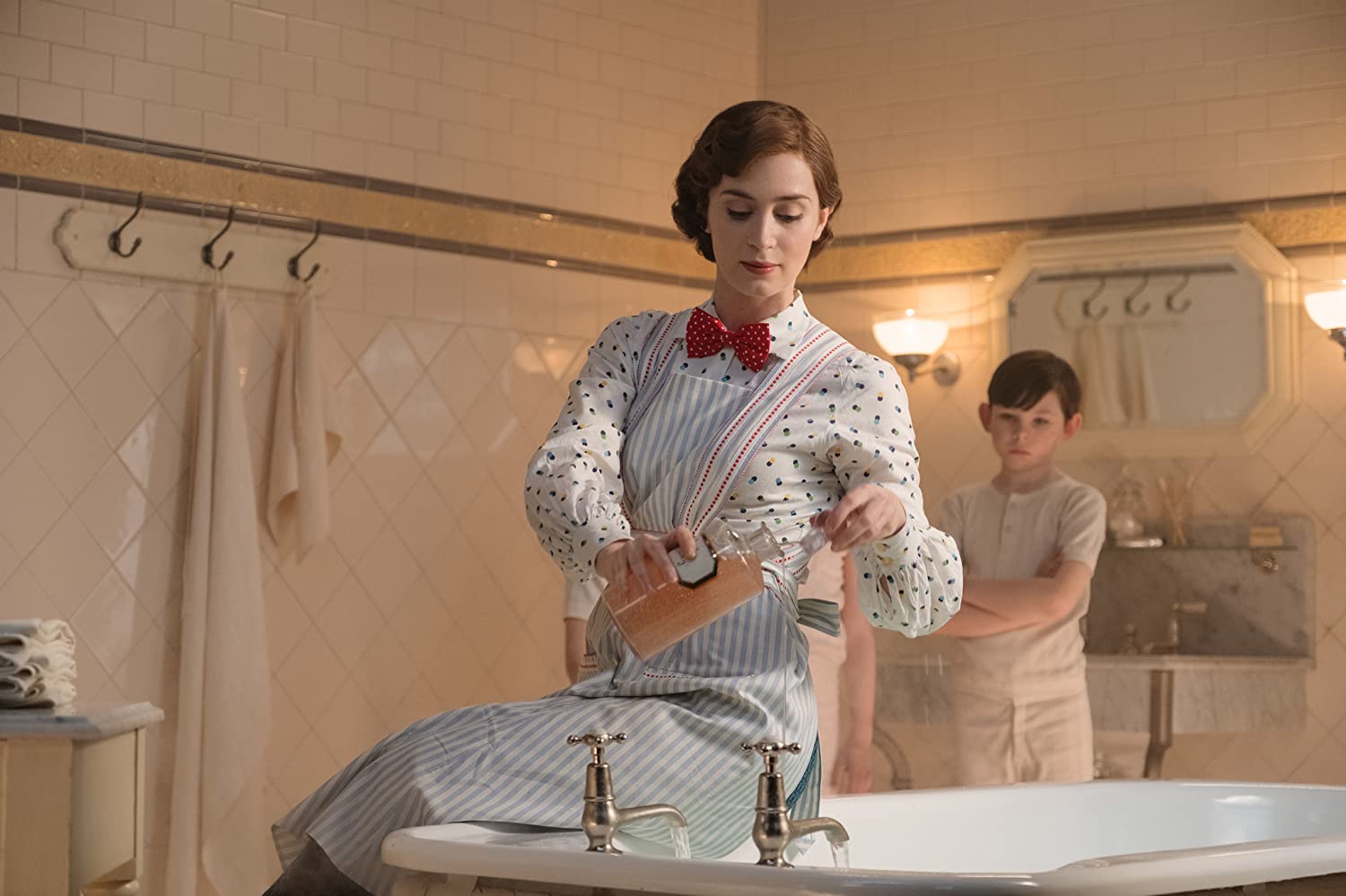 Mary Poppins Returns:
A Film As Polished As Poppins Herself

Mary Poppins has finally floated back into cinemas, a staggering 64 years after her first story was told. This time, the role is played by Emily Blunt and the chimney sweeps being switched out for lamp lighters. Under Rob Marshall’s direction, however, Mary Poppins Returns holds onto the original’s charm while creating a new story and soundtrack that will surely delight young children and fans of Walt Disney’s classic. Poppins embodies important human characteristics making her stories worthwhile for all audiences to see.

It’s 1935 and Jack the Lamplighter (Lin-Manuel Miranda) is making his morning rounds, turning off the streetlights while singing “(Underneath the) Lovely London Sky.” However, on Cherry Tree Lane, where the cherry trees are yet to blossom, a grown-up Jane and Michael Banks are haphazardly trying to take care of their childhood home and Michael’s three young children. Only then do bank collectors appear and nail a reclamation order for the house on the front door. Michael has fallen behind on his payments and must find proof of bonds to save the classic family home. As the children run off to try and help their father by buying the groceries, a woman emerges from the clouds. She’s carrying a patterned bag and an umbrella engraved with a parrot’s head on the handle; Mary Poppins has returned.

Emily Blunt, who graced screens but barely spoke a word earlier this year in the hit A Quiet Place, now has lots to say as a nanny who sings, dances, and tidies up the children’s rooms. Blunt is a perfect fit for the role, and she keeps her face sharp and composed with her shoulders thrown back to keep the frilly hat square on top of her head. Regardless of when the camera cuts to her, she is ready. Her quick glances over her shoulder and brisk step combine to create a stunning embodiment of the character Julie Andrews created and won an Oscar for so many years ago. And for a beloved character to be executed this well, it would be no surprise if Blunt received her first Oscar nomination for the role.

Aside from Blunt, all the other pieces of the film also fall into place. The traditionally animated china bowl scene (2018’s version of “Supercalifragilisticexpialidocious”) and Jack’s “Trip a Little Light Fantastic” are done so well that it feels as if they are being performed live. The witty lyrics, colorful balloons and trees in the park, as well as the low gray lighting of a depressed London, all fit seamlessly into the story. However, the biggest accomplishment may be designer Sandy Powell’s costumes. The way Mary Poppins’ coats hang and frame her shoulders, Mr. Wilkins’ pinstripe suit and accompanying carnation, and the children’s Sunday clothing are so vibrant that they enhance the emotions of each scene.

Mary Poppins and the lessons she teaches the children—reading beyond the cover of a book, reevaluating a situation from a new perspective, or looking in obvious places for something gone missing—all seem as if they could have been taught to many world leaders this year. Her embodiment of wholesomeness, efficiency, and responsibility are why her stories continue to resonate so many years later. These characteristics are timeless and will continue to be valued in society for centuries to come. Cinema holds the unique ability to portray idealized characters and traits and Mary Poppins presents audiences with a sense of comfort and stability. Only time will tell if the film is truly able to live up to the original, but for now, Mary Poppins Returns is the perfect film to end 2018.

Domenic Strazzabosco is completing his third year at San Francisco State University where he is studying cinema and journalism. He is interested in both film criticism and in pop culture, the roles both Hollywood and actors play in society, and he hopes to be able to cover these topics at a publication in the future. Additionally he enjoys analyzing the portrayals of female characters and thinking of films through a feminist or intersectional perspective. Amongst his favorite films are Sunset Blvd., The Incredibles, Boyhood and The Normal Heart but strongly believes the best piece of entertainment produced is Game of Thrones.