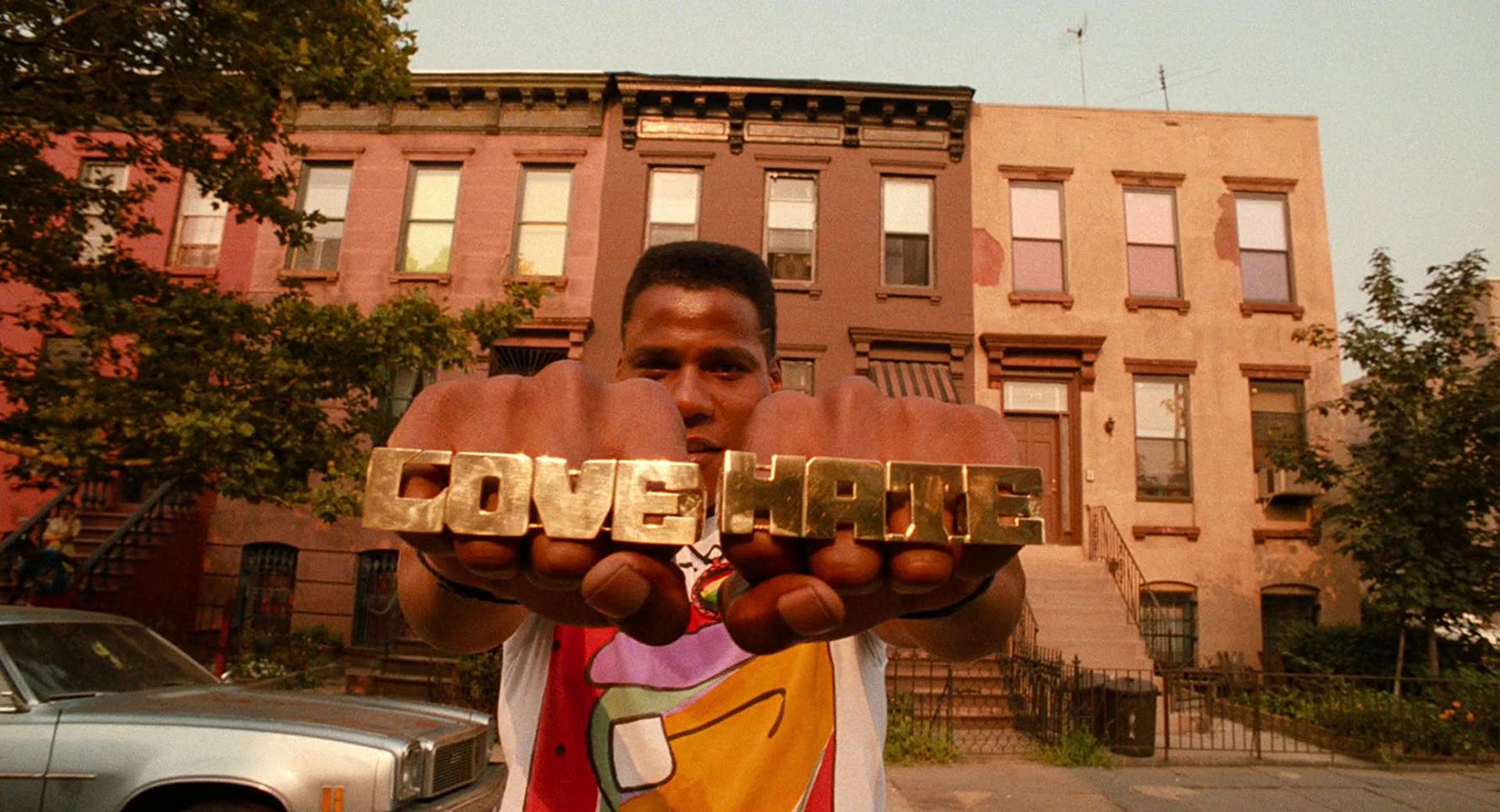 Mookie the Maestro and the Savagery of Stereotypes

Drawing acclaim and controversy in equal measure, Spike Lee’s Do the Right Thing (1989) uses the story of one Bedford-Stuyvesant neighborhood during the eighties to draw a rich and complex portrayal of race relations in America. Each one of Lee’s deep-focus shots is like another piece of a puzzle that allows us to see how this vibrant yet conflicted community fits together. Mookie, a young man who works at a pizzeria, is the obvious protagonist of the film, but his friend Radio Raheem and his Italian boss Sal, along with neighborhood fixtures such as Da Mayor and Smiley, are also fundamental to the narrative. Do the Right Thing encourages us to question how our perceptions of each character have been tinted and twisted by racial tropes. In particular, it explores the fluidity of black identity through Mookie, an individual whose amorphous yet multifaceted personality allows him to occupy many different roles in the community. In the sequence where Mookie takes a break from work to go home and take a shower, Lee employs mise-en-scène, sound, and camera movement to expound upon each nuance of Mookie’s character.

The smooth tracking shot that follows Mookie as he interacts with different members of the neighborhood reflects the ease with which he switches from one role to the other. Within the first few frames, distinctions between the characters are established through the objects they carry. As usual, Radio Raheem lugs around his boombox—which, like him, takes up a great deal of space and constantly demands an audience. Similarly, Da Mayor is holding a bottle of beer, which signifies his status as the neighborhood alcoholic, but also remains wrapped in a paper bag to indicate his respect for the law and for others. Only Mookie remains empty-handed, pointing to the fact that he isn’t as easy to identify. As Mookie begins crossing the street, the smoothness of the tracking shot is reinforced by its diegetic sounds, which serve as bridges between each brief conversation. The kids on the block acknowledge Mookie’s presence before we see them on screen and continue to taunt him long after the camera has left them behind. Similarly, Smiley calls to Mookie before he enters the frame. While the camera movement and sound serve to blend these interactions together, Mookie actually plays a different role in each one. When he sees the group of teenagers, he tells them to “get a job,” emphasizing the responsible side of his personality. When he affectionately teases Buggin’ Out, he becomes his homie. Finally, when Mookie buys one of Smiley’s photos, he appears to be generous.

In the next shot of the sequence, we see yet another side of his identity, which becomes even more nuanced when contrasted with the relatively flat presentation of Jade’s character. The shot begins with a medium shot of Jade as Mookie enters her apartment. Though the camera is not shooting from Jade’s perspective, by situating her in the foreground and showing Mookie move from the back to the middle ground, the shot stresses Mookie’s intrusion into her space. The high angle, which captures much of the apartment’s feminine and pastel-colored interior, portrays Jade’s apartment as an extension of her identity—a place she has succeeded in making into her own through being a responsible working woman. The lightly colored hues of its paintings and decorations are aptly reflected in Jade’s dress: she blends in perfectly with her surroundings, while Mookie, in his bright red shorts, stands out. Jade and Mookie’s differences in wardrobe also highlight their gender differences: Jade’s dress is carefully tailored to her form, projecting her femininity, while Mookie, in his baggy sports jersey, looks careless and boyish.

Jade’s independence causes us to perceive her as the “superior” character. Conversely, Mookie is seen as the irresponsible sibling: the one who fails, as Jade points out, to “take care of [his] responsibilities.” In her feminine and relatively reserved nature, however, Jade conforms to social norms that dictate how a woman should act. More importantly, unlike Buggin’ Out or Mookie, who actively engage in political discourse (Mookie insists that he’s not a slave when Jade asks him if he’s working), never is she shown to have an overtly political opinion. We know that Jade is independent, however, she is never given the chance to prove that she is a working woman; instead, she remains within the confines of her home for most of the narrative. The camera pedestaling down behind the fan and using it to frame Jade’s face affirms her compliance to social rules and indicates that her identity is as easily encased as the paintings embellishing her apartment. Jade is not in charge of her own narrative, nor does she influence the film’s. Whether she’s been forced into this role due to the pressures women face is another matter.

The music in the third shot of the sequence illustrates that despite being perceived differently by every member of the community, Mookie’s self-confidence is unwavering. He is alone in this shot, accompanied only by the jazzy number that begins playing as he takes a shower. When Mookie whoops, he does so in time with the score, as if he is the conductor of his own band. His shouting to Jade about wanting to take a shower whenever he wants also matches the piece’s rhythm. The music demonstrates that Mookie is his own maestro, that he doesn’t overtly reject or conform to any rules: he’s far from the stereotypically “rough” or aggressive black man, nor is he the “bum” Jade claims he is. The sequence then cuts to a shot of Mister Señor Love Daddy’s watery reflection in a spinning disc as he begins reciting the names of black icons. Love Daddy’s soliloquy on black greatness goes on to bridge the vignette-like shots that portray Mother Sister, Da Mayor, Coconut Sid and Co., the policemen, and the kids on the block, all suffering from the universally human experience of being stuck in the city on a scorching day. One could argue that these shots, too, toy with the idea of agency and mobility: though these characters are sidelined and relegated to a “commentator” role for most of the film, by the end, nearly all of them cross over into “actor” territory to participate in the riot.

Though no one character in the film is demonized or presented as worthy of worship, Mookie is the primary vessel of Spike Lee’s exploration of black agency and identity. Whether he is the responsible teenager, the generous stranger, or the annoying younger brother, he refuses to be pigeonholed and instead, plays each role with ease and confidence. Lee highlights the depth of Mookie’s character by contrasting him with Jade, whose likable nature can largely be chalked up to her obedience to social rules. The significance of Mookie’s subversion of stereotypes becomes starkly evident by the end of the film, when police intervention leads to the death of Radio Raheem, the arrest of Buggin’ Out, and the vindication of Sal. Radio Raheem is murdered, in part, because he was already pegged as the inherently violent (and therefore, inherently guilty) party. When viewed through the lens of identity and stereotypes, Spike Lee’s message is obvious: stereotypes exist, and they are lethal.

A senior at Stanford University, Elizabeth “Betsy” Kim interned at the Cannes Film Festival in 2018. She is an avid violinist who has performed at Carnegie Hall. Some of her favorite films include Sky High, Parasite, Do the Right Thing, and Cold War.