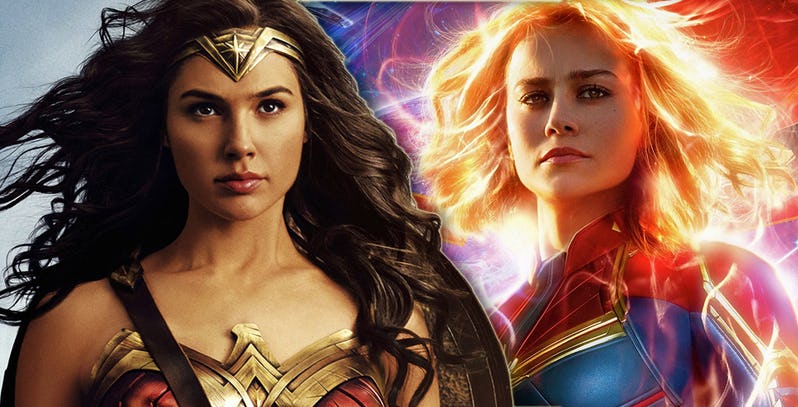 When Wonder Woman (2017) came out, I felt that most of its critical acclaim was the result of good timing. Thanks to infamous films such as the Razzie-winning Catwoman (2004), my standards for live action female superhero movies based on comic books were so low that a decent film would be a success. Because I found Wonder Woman merely passable, I believed that it wouldn’t have been a phenomenon if another female superhero movie of similar quality had been released first.

It wasn’t until I saw Captain Marvel (2019) that I realized how much I’d downplayed Wonder Woman’s achievements. While I connected with characters such as the sympathetic Skrull Leader Talos (Ben Mendelson), a hilarious secret agent named Nick Fury (Samuel L. Jackson), and an adorable cat named Goose (played by cats Reggie, Gonzo, Archie, and Rizzo), I was unable to form a bond with the sassy titular heroine Captain Marvel (Brie Larson), a.k.a. Vers. Likewise, the film featured some exciting action scenes—most notably, a thrilling fight aboard a train—but after watching the film, I had difficulty remembering any key moments from them. In retrospect, Wonder Woman set a high bar for female superhero movies. Along with featuring an incredibly likeable heroine, the film contained epic battles with breathtaking shots.

Set during specific times in history, each film sees the title character come to Earth to destroy their nemesis. Taking place during World War I, Wonder Woman, a.k.a. Diana (Gal Gadot), eagerly teams up with British spy Steve Trevor (Chris Pine) to find Ares, (David Thewlis) the God of War. Coming from the Themyscira, an ancient city hidden away from the world, Diana believes that Ares is the mastermind behind World War I and that if she kills him, both the Allied and Central Powers will stop fighting. The world of Captain Marvel is set in the 1990s: Vers, a member of the humanoid alien race known as the Kree, comes to Los Angeles, where she begrudgingly collaborates with secret agent Fury in order to find a special Light-Speed Engine before Talos does. If Vers fails, the Skrulls, a group of shapeshifting aliens, will spread their tyranny throughout space. While Diana and Vers have similar goals, they go about completing them in drastically different ways.

Even though Diana’s quest is to find and destroy Ares, she frequently puts her search on hold to help others. The strength of Diana’s moral compass is revealed in the now iconic sequence where she helps Allied soldiers push through No Man’s Land. The choice to use her shield rather than God Killer, her sword, serves a fantastic display of Diana serving as a protector of humankind. Rather than killing the enemy herself, Diana takes the brunt of their fire, allowing Steve and company to push forward. Through such selfless acts of heroism, Diana serves as a fantastic role model, making her easy to root for.

Unlike Diana, Vers remains strictly focused on her mission and shows little concern for those she encounters. While it’s great to show that not every problem can be solved with kindness, Vers spends too much of the film pitting her prickly personality against undeserving allies such as Fury. Far too eager to find Talos, Vers responds to Fury’s fair questions in a condescending tone: “Congratulations Agent Fury,” she says after he inquires whether or not she’s a Skrull, “you have finally asked a relevant question.” It’s only during Vers’ confrontation with her mentor Yon-Rogg (Jude Law) that she’s given a worthy enemy to stand up to. By this point, Vers has discovered that Yon-Rogg has been concealing her origins on Earth in order to manipulate her into wiping out the Skrulls, who are merely seeking refuge—not conquest. Unfortunately, Vers doesn’t face Yon-Rogg until the climax. Without many suitable oppressors to face down, Vers’ sassy demeanor makes for a deplorable heroine who is difficult to admire.

Vers fighting Skrulls while handcuffed is less exciting than it sounds. The action moved too fast for me to take anything in. Likewise, the colors on both the fantastic weapons the Skrulls wield and the beams of energy Vers shoots out of her hands are muted, making for some dull shots. Initially, I was tempted to attribute fault to setting the brawl on a poorly lit spaceship; but, upon rewatching Wonder Woman, I noticed that its climactic nighttime fight had none of these issues.

By contrast, Diana’s confrontation with General Erich Ludendorff (Danny Huston) and subsequent showdown with Ares are incredibly stylized. The use of slow motion creates striking images that resemble the panels of a comic-book. Most notable is the sequence in which Diana ensnares Ludendorff in her lasso and hurls him onto the ground. The fight makes great use of color: from the golden glow of Diana’s lasso to the bright sparks Ares emits when he hits the ground, the vibrant colors elicited by these godly figures contrast nicely with the black runway they are fighting on.