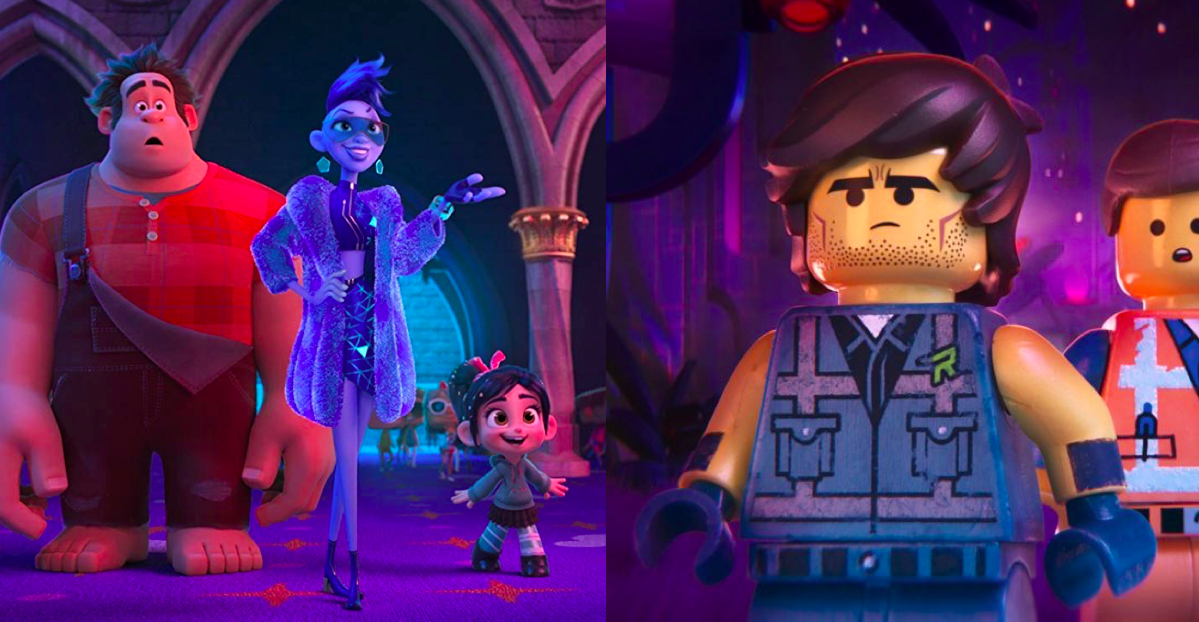 Ralph Breaks the Internet, The LEGO Movie 2, and the Self-Sabotaging Hero

Aside from their egregious amounts of product placement, Disney’s Ralph Breaks the Internet (2018) and Warner Brothers’ The LEGO Movie 2: The Second Part (2019) do not seem very similar. A closer look at each film, however, reveals that they both explore the idea of the self-sabotaging hero. Struggling to cope with big changes in their lives, heroes of both films must ultimately confront a personification of their own negative qualities to save the day. Both films stand out for their efforts to tackle male insecurity and sensitivity, neither of which are often addressed in mainstream films.

Ralph Breaks the Internet picks up several years after the first film, Wreck-It Ralph. At the end of Wreck-It Ralph, the titular Ralph came to accept his role as a villain in an arcade game, while his sidekick Vanellope returned to her role as a character in a racing game. We find out in Ralph Breaks the Internet that the two have spent the years between the two films playing out their respective roles in their native video games during the day. After hours, when the arcade closes, they are able to move freely between games and spend time with one another. However, Vanellope has grown bored of this repetitive and unfulfilling lifestyle. She yearns for more variety in her life, while Ralph is perfectly content with their daily routine.

When the steering wheel mechanism of Vanellope’s arcade cabinet breaks, her game is at risk of being retired—an event that would permanently displace Vanellope. To fix this, Ralph and Vanellope venture into the internet to purchase a replacement steering wheel on eBay. They run into trouble when they realize they do not have the money to purchase the item, and thus set out to find the means of making money online. In their journey to get rich quick, the duo comes across an online racing game, Slaughter Race.

Slaughter Race offers Vanellope the excitement she has been craving. Unfortunately, joining Slaughter Race means Vanellope would have to leave Ralph behind. In response, rather than discussing his concerns with his friend, Ralph decides to sabotage Slaughter Race with a computer virus. When Ralph releases the virus, not-so-subtly named an “insecurity virus”, it releases an army of Ralph clones that wreak havoc on the internet. The clones ultimately converge into a giant mass in the shape of Ralph, a hulking personification of Ralph’s neediness and insecurity. Ralph is only able to defeat the behemoth by explaining to it that he and Vanellope can still be friends, even if she moves away from the arcade to the internet. By confronting and coming to terms with his own fears, Ralph is able to defeat the consequences of his bad decisions.

The LEGO Movie 2 deals with this idea quite similarly, though through different circumstances. In the first LEGO Movie, it is revealed that the animated events in the film are a metaphor for events happening in the life of a boy named Finn. The sequel opens with a disastrous encounter between Finn’s LEGO sets and his sister Bianca’s toddler-oriented Duplo sets, which represents the reality that the brother and sister cannot get along and play together nicely. The film fast-forwards five years later to the present day where, in the wake of the siblings’ conflict, the city of Bricksburg (in actuality a large LEGO landscape in Finn’s basement) has given way to the grim, gritty, aptly named Apocalypseburg.

Emmett the protagonist is criticized by his friend Lucy for remaining happy-go-lucky and not adapting to the dour, brooding attitudes of Apocalypseburg. Lucy disapproves of Emmett’s lack of performative masculinity. Everyone else around him has adopted a steely, tough-guy persona—an exaggeration of traditional ideas of masculinity. The denizens of Apocalypseburg have all taken on comically exaggerated tough and edgy appearances, wearing Mad Max-style spiky outfits and carrying weapons. Even the cutesy comic relief character, Unikitty, who was previously made from pink and pastel LEGO bricks, is transformed into a conglomerate of angry reds and oranges. Only Emmett remains unchanged, which Lucy views as a problem.

When Emmett’s friends are kidnapped by Bianca’s LEGOs, he must go to their rescue. He is aided by a mysterious character named Rex, an exaggerated caricature of machismo. Bianca’s LEGOs want a harmonious unification with Finn’s LEGOs, but Emmett and the rest of Finn’s toys think this will trigger a disastrous catastrophe called “Our-Mom-Ageddon”. As Emmett and Rex travel to the Systar System, where Bianca’s Legos reside, Emmett begins to adopt Rex’s over-the-top macho mindset. The two eventually concoct a plan to stop the unification of the two LEGO worlds by destroying the wedding ceremony between Finn’s Batman minifigure, and Queen Watevra Wa’Nabi, one of Bianca’s figures. Unfortunately, it is the destruction of the wedding ceremony (paralleled by Finn smashing his sister’s LEGO set in the real world) that puts the LEGO characters in jeopardy of being put away in storage.

It is then revealed that Rex is actually Emmett from an alternate timeline, who traveled back through time to help his past self prevent the wedding from occurring. Emmett must then face down the tough, exaggeratedly masculine version of himself that his friends encouraged him to be. The film suggests that this supposedly mature form of masculinity is actively harmful to the inhabitants of the Lego-verse. Emmett has to face down the worst version of himself and accept the fact that he was fine the way he already was, as a friendly and positive person.

Each film presents the challenges its protagonist faces in a unique way. Ralph’s problems come from within; he is unwilling to accept that his friend needs to move on in order to achieve happiness. His fear and defiance cause him to act out, nearly destroying his friendship and the entire internet in the process. He has to recognize that he can still be friends with Vanellope, even if she no longer lives in the arcade. Conversely, Emmett’s change comes from the outside. The rest of the world mutates around Emmett into a parody of “serious” maturity, the comically gritty Apocalypseburg. Emmett is pressured by those around him, and as a result, causes nearly all of his friends to be put away in storage. Only by accepting that his originally kind, understanding nature was right all along is he able to stop from becoming the hardened future version of himself and unite both LEGO worlds.

I find it interesting that these two films were released only months apart and deal with similar subjects, especially as it is not common for mainstream family movies to explore themes such as self-sabotage. Discussions about toxic masculinity and allowing for nontraditional presentations of masculinity are becoming more common in popular discourse, and these films seem to be a contributing factor. The male protagonists must acknowledge their insecurities and toxic behavior and reject societal expectations of masculinity in order to save the day. As movies continue to progress and reflect modern society, it will be interesting to see what other nontraditional expressions of gender will be explored or deconstructed in the future.