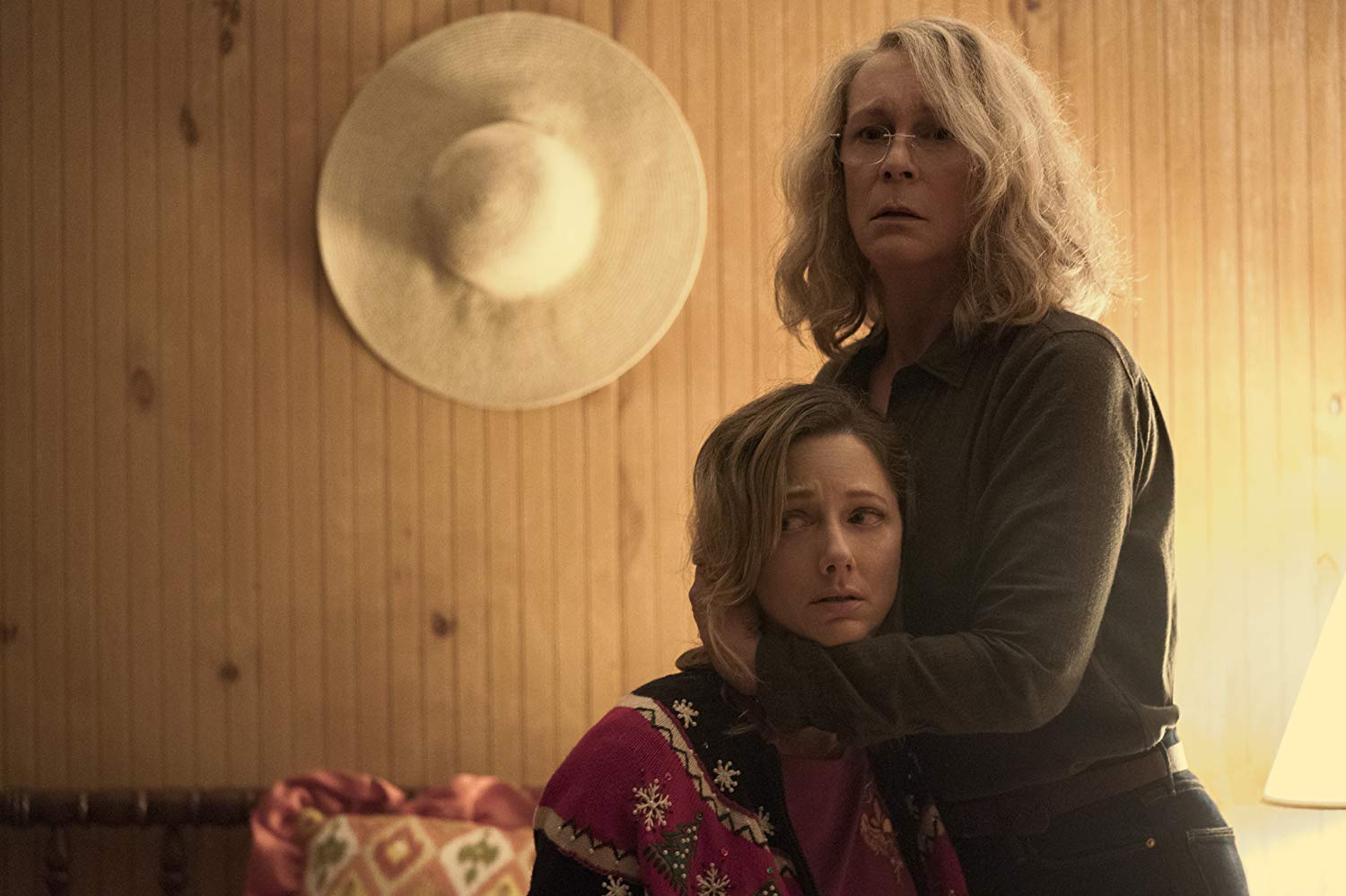 A slasher movie through and through

Another October has come and gone, this time leaving a new Halloween sequel in its wake. The film made an incredible amount of money at the box office, so now we are left to wait in suspense to see if Michael Myers will once again be resurrected for more sequels. Pray that this remains a one-and-done film.

The Halloween franchise is a peculiar one, and the new reboot, also titled Halloween (hereafter referred to as H40) decides to look back on forty strange years of its franchise’s history. This self-reflection manifests as self-referential humor, rather than as a serious look at the previous ten films in the series. It might be expecting too much for a Halloween sequel to take an earnest look at itself and the franchise’s history, but the references are so on-the-nose as to be obnoxious.

H40 makes its intentions clear right off the bat. The transition to opening credits is a smash cut to the remains of a rotten jack-o-lantern, which then restores itself to its original form via reverse time-lapse photography. This recalls the opening credits sequences of the first two Halloween films, which featured slow dollies towards a lit jack-o-lantern. Given the erasure of the sequels that follows, this speaks to me as the film saying, “this franchise is old and rotten, and we are here to bring it back to life”.

From the start, H40 acknowledges that only the events of the original 1978 Halloween film transpired, which eliminates the twist of Halloween II that crazed serial killer Michael Myers is actually the long-lost brother of the film’s protagonist, Laurie Strode. It awkwardly addresses this by having a character ask if Michael was Laurie Strode’s brother, only to be told that the belief is actually a part of a false rumor. Curiously, as far as H40 goes out of its way to remove all traces of the previous movies, it still winds up recycling plot structure and elements from Halloween 4 and Halloween H20.

The film borrows the extended “Michael gets his iconic costume back” element from Halloween 4 and takes it to ridiculous extremes. A pair of true-crime podcasters attempt to use Michael’s original mask to bait him into an interview about his past before he is transported to a maximum security institution. The podcasters believe that bringing the mask to Michael might get him to finally open up, but this plan does not work. Michael Myers is notoriously mute, serving as the prototype for many of the “silent killer” villains that often appear in slasher films. After the failed interview, Michael predictably escapes during transport between institutions, conveniently runs into the interviewers at a gas station, kills the attendants for their work clothes, and then the podcasters to get his mask.

H40 bears a major similarity to Halloween H20, which also features a similar story of Michael Myers returning to kill Laurie Strode on the anniversary of the 1978 killings that occurred in the original Halloween. Whereas H20 acknowledged the events of Halloween II as part of its background, H40 does not. Thus, the familial bond that fueled Michael in 1998 is no longer present. It makes it odd, then, that Michael still wants to attack Laurie. What makes her such an enticing victim if she isn’t related to him? Maybe he is just really bad about holding grudges. The similarities are still present, even if the sibling ties are gone. In both films, Laurie has become a curmudgeonly, paranoid woman who has a strained relationship with her child, and it is a bit of a disappointment to see a likable horror protagonist turn into a person dominated by their fears. It might be satisfying for some to see Laurie turn into a Sarah Connor-esque badass, but for me, it seems like a disservice for that development to come at the price of her having a miserable life.

Perhaps my biggest gripe with H40 is the aforementioned self-referential humor. Halloween H20 has similar humor, tinged with the disaffected irony of the post-Scream horror films. However, rather than efface itself like Halloween H20, H40 is littered with self- congratulatory allusions to the franchise. The third act confrontation between Laurie and Michael is littered with moments designed to make astute film bros in the audience gleeful that they have caught a reference. Remember when Laurie hid in a closet in 1978? This time, Michael is hiding from Laurie! Remember when Michael fell off the balcony and then disappeared in the next shot? This time Laurie does that! Remember Doctor Loomis? He was the good guy, remember? This time, his successor is here, and not only does he refer to himself as the “New Loomis”, but he also turns out to be a bad guy! What a twist! There are even references to Halloween II in the long take where Michael steals a kitchen knife and Halloween III in the brief appearance of Silver Shamrock Halloween masks. Even though it wants to disavow the sequels, H40 cannot pass up the chance to sneak in references to them.

In a strange way, H40 is indicative of a greater trend in franchise films. Star Wars: The Force Awakens shares a similar predilection for recycling plot elements and sprinkling in self- referential nods. The Marvel Cinematic Universe, too, loves to cram in Easter eggs to make fans feel like they have been rewarded for diligent study of a media property. I am curious if this pattern will extend to other horror reboots in the future. A new Child’s Play film is on the way, and that series is notorious for self-reflexivity, so perhaps it, too, will follow suit.

It is hard to be completely mad at H40. The references are obnoxious, but they are meant with good intentions. Writers David Gordon Green and Danny McBride clearly love the original film, and this is their way of acknowledging their appreciation for it. Their writing does not work for me at all, but I understand why they did what they did. References are popular, and it only seems logical to honor a film franchise’s forty-year legacy by alluding to the other films in a way that the average horror fan will enjoy. At least the film does not have any delusions of grandeur. It is a slasher movie through and through. It just happens to feel like a slasher movie recounted by an unusually gregarious horror geek at a party.