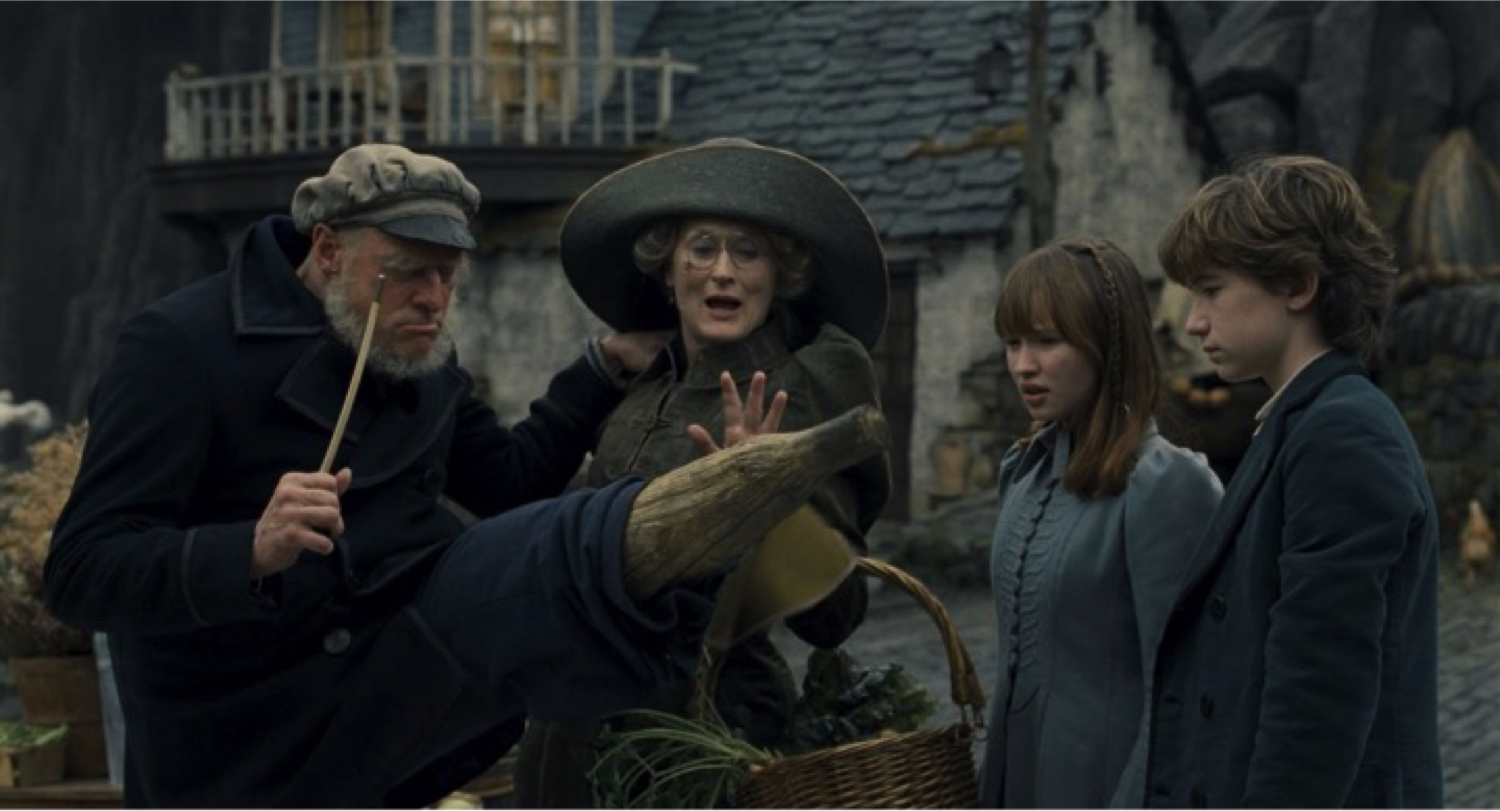 Lemony Snicket’s A Series of Unfortunate Events: An Artful Adaptation

At first, I didn’t like Lemony Snicket’s A Series of Unfortunate Events (2004) 1. Compared to the books, the film resolved conflicts too quickly, which diminished any feeling of tension. In retrospect, I think I might’ve been too harsh, as director Brad Silberling faced the Herculean task of adapting three books into one feature-length film. The plot needed to flow seamlessly from one story to the next, which couldn’t have happened unless key parts of the books were trimmed down.

Three children—Violet (Emily Browning), the oldest; Klaus (Liam Aiken), the middle child; and baby Sunny (Kara and Shelby Hoffman)—lose their parents in a fire that destroys their home. The Baudelaires are placed in the care of their closest living relative, Count Olaf (Jim Carrey)—a sinister man solely interested in the fortune the Baudelaires’ parents left behind. Luckily, Mr. Poe (Timothy Spall), a banker in charge of the orphans’ affairs, witnesses the Count attempting to kill the children to inherit their money and reassigns the Baudelaires to new guardians—first to their reptile-loving Uncle Monty (Billy Connolly) and later to their phobiaphobic2 Aunt Josephine (Meryl Streep). In each case, Olaf arrives in disguise, murders the Baudelaires’ guardian, and launches a devilish scheme to seize their inheritance. To make matters worse, the Count eventually regains custody of the children by pretending to save their lives in front of Mr. Poe.3 Anytime the Baudelaires turn to an adult for help, they aren’t taken seriously, which forces the children to escape Olaf’s trials on their own.

Despite the seemingly high stakes, it’s difficult to be in suspense, as the Baudelaires foil most of the Count’s plans with ease. When Uncle Monty suspiciously dies shortly after Olaf’s arrival, it doesn’t take much for the children to disprove the Count’s claim to the authorities that it was the work of Monty’s snake, the Incredibly Deadly Viper. In the book, Sunny creates a diversion to buy her siblings time to find the necessary evidence)—with Klaus searching Monty’s library and Violet picking the lock to Olaf’s suitcase)—whereas in the film, Sunny merely lets the Viper play with her to prove that it’s harmless. Compared to the book, defeating Olaf seemed too easy.

Looking back, I couldn’t have expected Silberling to retell each book in its entirety, as a film with three climaxes would’ve grown tiresome. As Silberling mentions in the commentary track, he didn’t want the plot to get repetitive, so he moved the final chapters of The Bad Beginning to the end of the film to serve as the climax while abridging the endings to the other books to serve as minor conflicts along the way. Of the three books, I feel that the ending to The Bad Beginning is the most effective as the height of the film. Having the children escape Olaf, only to wind up back in his hands, brings the narrative full circle.4

While I prefer the current Netflix show Lemony Snicket’s A Series of Unfortunate Events, which better suits the episodic nature of the books, Silberling’s work shouldn’t be overlooked. Back in 2004, adapting the series into a movie was the only option: the Harry Potter film adaptations were massively successful, both critically and financially, and big budget shows such as Game of Thrones wouldn’t come around until a few years later. A film wasn’t the ideal medium for these stories, which makes Silberling’s accomplishment of weaving them into a coherent narrative all the more impressive.