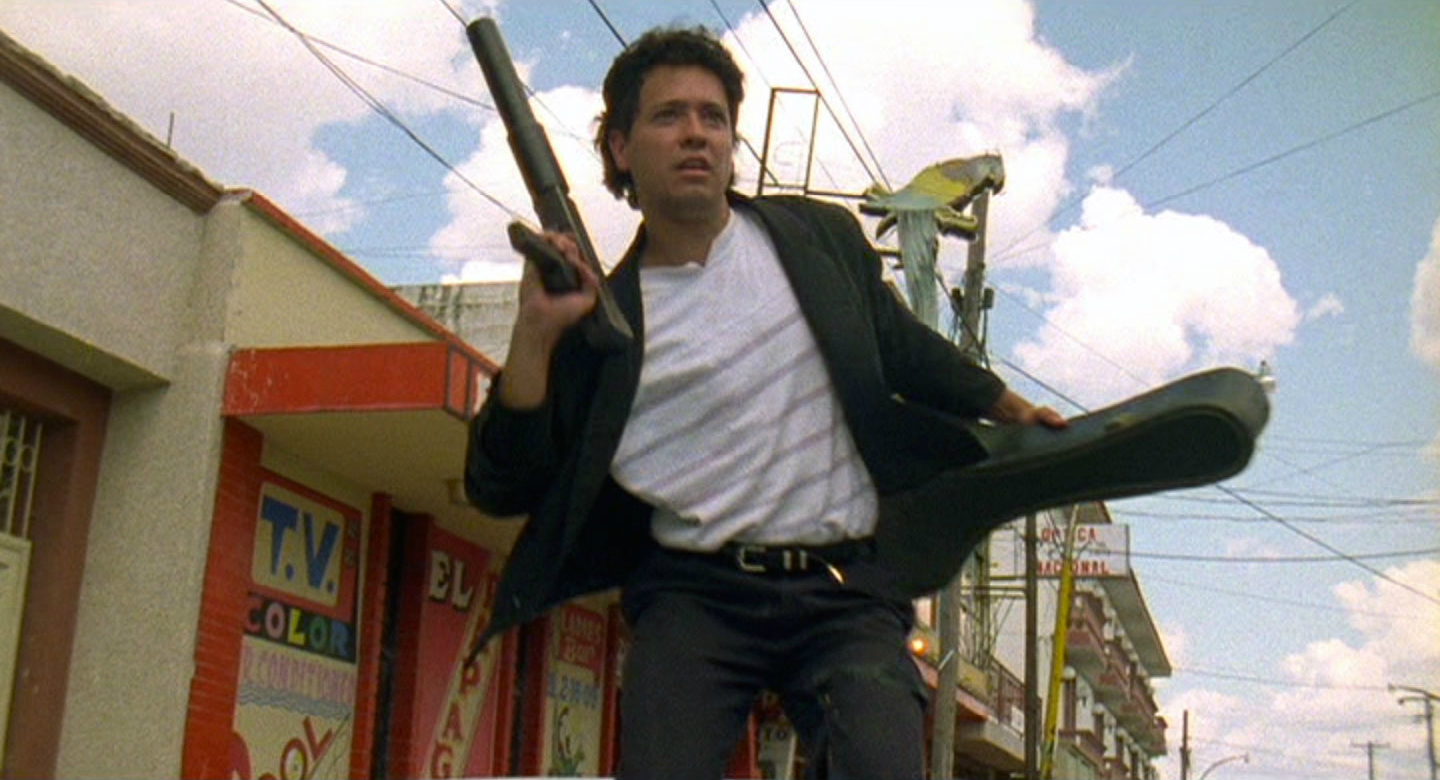 Latinx Heat: the Making of a Mexican Legend

The making of El Mariachi is almost more legendary than the film itself: 23-year-old Robert Rodriguez was armed with only $7000, which he earned through a combination of festival earnings and payment from a month-long clinical experiment in a medical facility. With creative intuition, clever camerawork and editing, and a pure love for filmmaking, however, Rodriguez transformed a small film meant for the Spanish video market into one of the biggest hits of the Sundance Film Festival. The film propelled his career to Hollywood and eventually led to sequels Desperado and Once Upon a Time in Mexico, along with films such as Sin City, Spy Kids, etc. Rodriguez’s rebellious self-dependence is a source of inspiration for every independent filmmaker who feels that the dream of realizing their passion projects is impossible under the tyrannical Hollywood system.

No one could ever say that Robert Rodriguez makes movies to win awards or impress critics. In every single one of his films, it seems that he makes movies for the fun and thrill of doing so; that he thinks, “That’ll be awesome” and puts it on screen. From his early days of being a comic strip artist and making short movies on a video camera with his ten siblings, Rodriguez was enamored by the independence filmmaking gave him. Since then, his individuality has exploded off the screen, film after film. “A movie about a Mexican bar where all the patrons turn into bloodthirsty vampires when the sun goes down? Hell yes, let’s make it! A movie about a secret government agency that recruits small kids as spies? Of course, let’s make four of them.” It is the reason why his films are so adored by movie fans, because despite the violence and relentless action scenes, he really still feels like a little kid playing with a video camera. All these ideas came to fruition because of a basic idea that Rodriguez had as he set out to direct his first feature film: what if there was a guy who had a guitar case full of guns? This idea gave birth to a cinematic world where el Mariachi is a legend. As Steve Buscemi’s character says in the beginning of Desperado, “In walks the biggest Mexican I’ve ever seen. Just walked right in like he owned the place.” In El Mariachi, Rodriguez gives him an origin story, one filled with a tragedy and a curse.

When we see el Mariachi onscreen for the first time, he is alone. Armed with his guitar and a love of music, he is traveling from town to town, looking for an audience. For the remainder of the entire franchise, we simply know this man as el Mariachi. Every new town is a new adventure for him. When he arrives at Acuña and is greeted with an ice-cold coconut, he says in the voice-over, “Free coconuts. I was starting to like this town.” The voiceover trickles over the screen tenderly, making the desert town feel like a pleasant dream. But when he goes into his first bar to introduce himself as a great musician, the bar manager immediately writes him off. The same thing happens at the next bar, and the look of hurt on el Mariachi’s face is pitiful. You can tell that success is not a common factor in el Mariachi’s life. For all his hope and optimism, he is just an everyman, a sucker—the typical origin story for every folklore legend. From then on, elements out of el Mariachi’s control throw him into a life of flight and survival. He is attacked in his hotel room and chased all over town. He keeps having dreams of a door in the desert that goes nowhere, haunted by a small boy holding a dismembered head. El Mariachi feels the weight of a curse that the town of Acuña has brought on him, and he just cannot seem to find his way out.

Robert Rodriguez once said that while he was discussing his Mariachi character with Quentin Tarantino, he realized that this character could be his own Dollars trilogy, the three spaghetti western films directed by Sergio Leone centered around a gunslinger who was never given a consistent name. That character, played by Clint Eastwood, is considered one of the greatest characters in film history, and there is no doubt that Robert Rodriguez wanted to imbue his protagonist with some of those iconic attributes. From the simple fact that el Mariachi remains nameless throughout the film to his vague backstory and inevitable tragic fate, Robert Rodriguez makes a folk hero in the likes of the Man with No Name. El Mariachi is an innocent, sweet, gentle man who only wants to play music. He falls in love with a beautiful barmaid named Domino. The ambience surrounding el Mariachi always feels warm and lush. At one point in El Mariachi, he is on a bright path, enjoying his blessings as he goes. But like many legendary figures in film, el Mariachi’s fate turns out to be filled with heartbreak, violence, and darkness. He finds himself in the middle of a crime war between two ruthless murderers, Azul and Moco. Azul goes around killing all of Moco’s men, all while wielding a guitar case full of guns, knives, and other tools of destruction. When Moco lays down the order to “Kill the man dressed in black walking around with a black guitar case”, el Mariachi’s fate is sealed.

Not many iconic Mexican film characters exist outside of Mexico. During the Golden Age of Hollywood, Mexicans usually played villains or fun secondary characters that were not given as much attention as the white hero of the film. Even in a film as great as Viva Zapata!, the titular Mexican character is played by Marlon Brando. However in Mexico, iconic Mexican characters such as Pedro Infante and Jorge Negrete were known for being musicians, while comedic characters such as Cantinflas and Resortes lit up the screen with their larger-than-life personas. In El Mariachi, Robert Rodriguez manages to create a hero that appealed to everyone. This musician whose life would be marked by the deaths of his loved ones and his never-ending quest to stay alive, was unlike anything the Spanish movie market had ever seen. That was Rodriguez’s intention after all. Due to his desire to just make a movie without anyone’s approval, he figured that the Spanish video market would give him just enough money to make the next one. But soon, the United States wanted El Mariachi too. The story of how a man’s heart went from soft and sweet to cold and rotten was one that global audiences could relate to. As the years went on and the franchise grew, more and more people tuned in to watch explosive action sequences that took place in little Mexican villages. El Mariachi, played by Antonio Banderas in the next two films, became a legend. Rodriguez’s Mexico trilogy became some of the most iconic films ever to take place in Mexico.

As an aspiring Latinx-American filmmaker, I feel overwhelming pressure to make poignant, groundbreaking stories about Latinx characters who lived through life-changing, triumph of the human spirit-like events. But Robert Rodriguez’s Mariachi trilogy and entire filmography reminds me to forget about everyone else’s expectations of the stories I want to tell. His philosophy of telling stories that feel fun and badass is refreshing and eye-opening and serves to prove that people will flock to stories that a person is passionate about. “Someone put himself through a month-long medical experiment to finance his film? He gathered up every known resource and connection he had to make a feature-length action film for $7000? Where can I see this film?” El Mariachi, cursed by a guitar case, lost everything from the love of his life to the ability to play the guitar. Robert Rodriguez gained the world’s confidence in his creativity. In the end, Robert Rodriguez’s name is as legendary as El Mariachi itself.