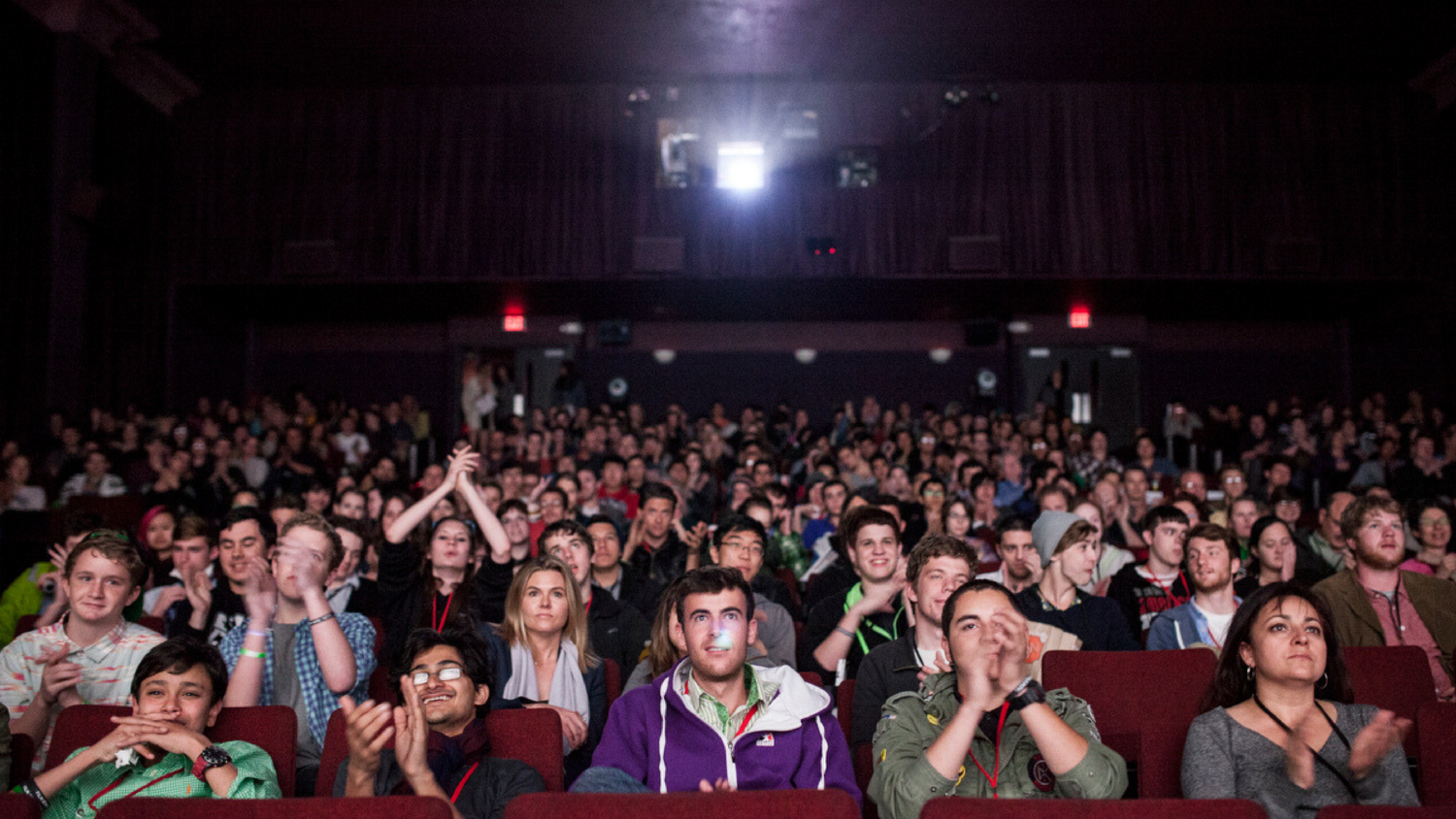 As a person who had not attended a whole film festival of any sorts before, I definitely did not know what to expect when I traveled from New York City to Seattle for the National Film Festival for Talented Youth (NFFTY). I did not know the people that ran the event, I did not know any of the filmmakers who had visited the festival before, and I did not know the kind of films I would be seeing. But despite the things I did not know, I knew that I was going to experience something truly unforgettable, surrounded by people who shared the same love of film that I have developed over the years. And boy, do I love being right.

If there was one word I would use to describe NFFTY 2017, it would be inspirational. There is something about being in a packed theater with people who could not wait for the next screening, for the next film to play, for the filmmakers to make their way to the front of the theater and ask them questions. The only time I had ever experienced that buzz before was in a screening of the New York Film Festival with Hollywood stars and directors. I was surprised to see the amount of enthusiasm for young artists (some of whom are still attending school), but it was then that I realized that I was being foolish. After all, the people behind NFFTY have created a family and an atmosphere that invites people of all ages to come together and discuss this art form that we have all come to love so much. Filmmakers have looked to NFFTY for years as a place to showcase their work because they know that young people’s work holds significant value in the film industry. As a festival audience member and critic, I was very impressed by everyone at the festival.

One of the best parts about experiencing NFFTY was witnessing the range of topics that young artists were covering in their films: revenge stories, road films, existential animation, music videos, beautiful, powerful documentaries about foster families and death row inmates, tragic and haunting narratives about love, pain, and the experience of being human; the work screened at NFFTY had something for everyone. Out of 230+ films screened at the festival, the films that stood out the most to me personally include:

Frankie Keeps Talking—a film by Annabelle Attanasio about a horrible first date in which the protagonist realizes that her date will not stop talking. The creativeness of the cinematography, along with the hilarious comedic skills of the main character, made this film an unforgettable experience during the festival’s opening night.

Seven Dates with Death—the story of Moreese Bickham, the oldest living survivor on Death row, who describes his crime—a result of a hate crime committed against him—and the forgiveness he holds in his heart for the system that led to his incarceration. What an experience it was, listening to him speak and share his wisdom.

Warm Springs—a touching, eye opening look at a boy’s determination to be accepted by his brother. This film touched me emotionally as a family man and as a young boy who always looked up to his older brother. This was one of the highlights of the festival, in my opinion.

Los Angeles, 1999—a film reminiscent of Her or Lost in Translation about two different groups of people struggling with thoughts of isolation and confusion as they encounter the new millennium. I couldn’t move at all when the credits rolled. I felt stunned. I felt longing. I felt alone. What a film!

Damn Graduation—a Norwegian film chronicling a group of friends celebrating their last month of high school. This coming-of-age story examines friendship, the harsh reality of dreaming, and the passage of time. Coming-of-age dramas are a soft spot for me, so I was all in from the start.

Atlas World—a terrifying nightmare of a music video that tells the story of three girls haunted by a malignant spirit after playing with a Ouija board. Its provocative visuals terrified me in the best way.

Hi-Glow Retro—a charming, witty story of a teenager trying to learn how to dance to impress the girl of his dreams. The scenes that drew the laughs from the theater’s audience were executed wonderfully.

Satisfaction Guaranteed—one of the best experiences of going to the theater is feeling that the entire audience is rooting for the protagonist, that they cheer and applaud when the character gets their way. I felt that tenfold with this film, which relates the story of a woman who gets surgery to try to be the perfect housewife for her ungrateful husband.

The Last Laugh screening featured many awesome films—Chainsaw Charlie, for example, put a spin on the slasher genre, while Red Hot Frog examined a man’s fatal desire to be appreciated at his job. All the films were fantastic, however, and provided an accurate representation of the wide range of talent the festival has to offer.

Fish Hook and Eye tells the story of a couple falling for each other, followed by love personified as a femme fatale. As a sucker for any love story, I fell in love with the different ways love could be expressed, as well as the film’s spin on the cliché genre.

Back Pocket and Twenty Something Nothing were two lighthearted, enjoyable music videos that proved that a great experience at the movies does not always involve heavy dramas; that one can enjoy and laugh at the images on screen and still feel fulfilled afterwards. The work of the two films’ directors, Tim Hendrix and Laura Holliday respectively, was rewarding every step of the way.

Withheld—a brutally intense look at a conversation between a phone sex worker and her customer. The dark twists and turns of this film were simultaneously entertaining and powerful, and I couldn’t have enjoyed it more.

My Bike & Me—ever wonder if it would be funny if a grown teenager tried to learn how to ride a bike? This film was hilarious in a unique, unprecedented way. You could feel the dedication and joy put into the film radiate off the screen. My Bike & Me is true, honest fun to be enjoyed every time it’s watched.

Beside Myself—a complete work of art that felt like it grew in the mind of a mad man. I felt the care that went into this film in every frame, from the gorgeous animation to the jokes that emerged from every which direction. What a project from these hilarious filmmakers.

The Witching Hour—you can’t go wrong with a shy, fearful protagonist and an eccentric, quirky young girl who go on an impromptu date on Halloween. The charisma and chemistry between the two main characters leaked off the screen and throughout the theater.

305/307—a film telling the story of two strangers sharing a night of passion, and who share the story of their own significant others that they are being unfaithful to. The slow motion, the split screens, the longing felt between the characters was immensely powerful. It took a hold of me and kept me thinking minutes after the credits rolled.

The entire Closing Night: American Dreams screening had me floored from beginning to end. The powerful documentary Forever Home told the story of a family trying to stay together despite all odds, while The Blaise EP featured some of the best interview scenes and soundtracks in the festival. Meanwhile, Hell You Talmbout shed some light on racial violence and police brutality. Many of the films resulted in a standing ovation.

For my closing remarks, I would like to say thank you. Thank you to everyone on the NFFTY 2017 team who worked their hardest to make this festival work, with a special shout-out to Stefanie Malone, Kyle Seago, and Robert Bojorquez. Thank you for inviting me to your festival and providing a platform for young artists to display their work. Thank you to all the filmmakers who poured their feelings and hearts onto the screen and interacting with an amateur such as myself during the festival. Everyone was incredibly kind and friendly, which made the festival that much better. This year, I was merely a viewer. But the atmosphere I felt while in Seattle makes me want to come back next year as a filmmaker. Hopefully we’ll see each other again soon, NFFTY!