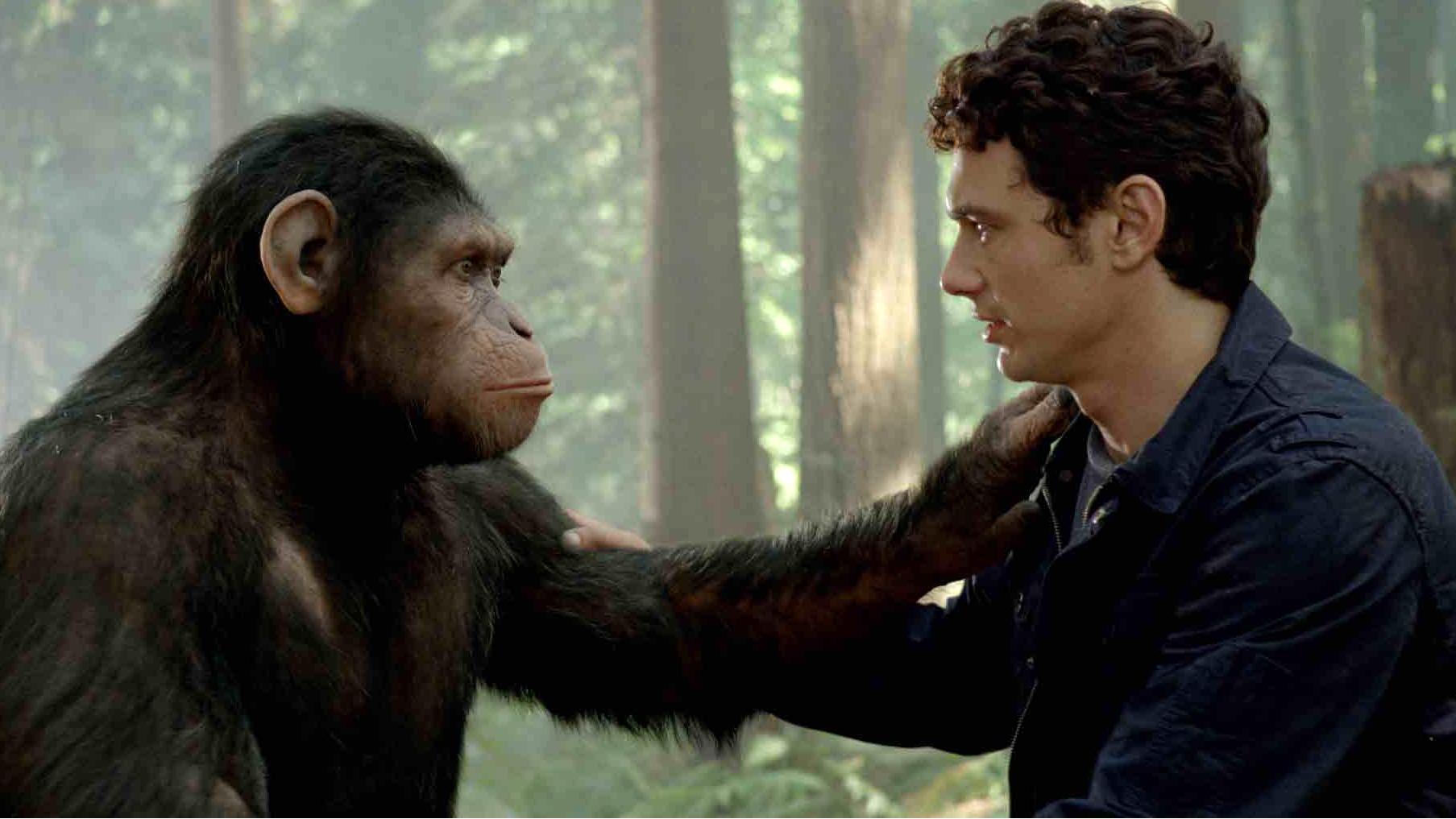 Getting Ready for War

Amongst the many franchises that began and continued within this decade, one franchise has stood above the rest. Despite boasting a legacy of five previous films that are regarded as science fiction classics, Rupert Wyatt’s Rise of the Planet of the Apes and Matt Reeves’s Dawn of the Planet of the Apes were not guaranteed to become critical and commercial successes. But due to well-crafted stories that blend character development and adrenaline-filled action, universal themes such as the cruelty of nature and the ignorance of human beings, and unforgettable performances by the motion capture actors that portray the apes, both films have not only lived up to their predecessors, but also managed to make audiences genuinely excited for the next installment later this year. While this article may go over the earlier films of the Planet of the Apes franchise, the main focus will be on Rise and Dawn, and the world they have established leading up to War for the Planet of the Apes.

I remember watching the original films as a kid, and even then, I was amazed at the social commentary that the series made about the hatred and devastation we humans are capable of. Through the depiction of a post-apocalyptic world in the original Planet of the Apes and its sequel Beneath the Planet of the Apes, audiences learned about the dangers of nuclear war, and what we risk when trying to establish our superiority over other living things. The following films, Escape from the Planet of the Apes, Conquest of the Planet of the Apes, and Battle for the Planet of the Apes, showed audiences an allegory to the Civil Rights Movement, particularly when Caesar organizes a riot in Conquest, similar to the Watts riots and other civil unrest of the time period. Moviegoers who loved the science fiction series for its social commentary might have hesitated before going to a big budget summer blockbuster installment, but thankfully, the director and screenwriter understood what these films were all about, and set out to make that point even clearer.

The Planet of the Apes universe is a franchise that can always be supplemented, but with a subpar remake of the original in 2001, the future of the series had no guarantee. The sequel to the remake was cancelled and nobody knew what to do afterwards. In an attempt to revitalize the franchise, 20th Century Fox put a whole new angle on how the events that led to apes taking control of the planet took place in Rise of the Planet of the Apes. Rise centers around the birth of Caesar the chimpanzee, the product of a study conducted by a pharmaceutical company developing a cure to Alzheimer’s. Due to the study, Caesar’s mind is more advanced than any ape’s. He ponders his origin and place in the world and wonders why humans cannot treat him as an equal. It is through Caesar’s character that Rise maintains the dramatic, socially conscious tone established in the earlier films. After all, the apes do not think twice about being abused by humans because they are used to being lab rats, but Caesar recognizes that things should be different.

It is at this point in the film that most audience members, disgusted with humans’ behavior, likely began rooting for the apes and against the humans. When human man Dodge, played by Tom Felton, tries to put Caesar back into his cage and Caesar catches his arm in midair, we cheer. When Dodge says the famous line, “Get your stinking paws off me, you damn, dirty ape!”, and Caesar answers back with that powerful “No!”, the first word spoken by an ape ever recorded, I was left stunned. When I saw this film in theaters, in that moment, silence filled the room. It was almost as if we the audience was forced to confront our cruelty, the fact that we abused an animal so cruelly that they had to speak our language just to be heard. Then Caesar leads the apes’ escape and make their way to the Redwoods near San Francisco. At this point, the film becomes an action extravaganza; however, the buildup to this action sequence, where the apes push their way through San Francisco, is where the heart of the film lies. Caesar, an animal raised apart from his own kind, risks his life to save his own kind from the traps human beings have set for them. Even after the apes show their collective strength, the film’s ultimate villain Steven Jacobs, played by David Oyelowo, refuses to respect them. His immediate response is to kill and capture the apes once again. Jacobs represents the worst of humanity, a characteristic that is a trope of this film series. Throughout the narrative, Caesar befriends fellow apes Maurice, Rocket, Koba and others—these apes become the central group that make up the dramatic core of this film’s sequel.

When Rise’s sequel, Dawn of the Planet of the Apes, arrived a couple of years later, I was first in line to the earliest possible screening. Dawn was unexpected in its commitment to exploring the apes’ storyline over the humans’. The film centers around Caesar and his apes, who encounter the first group of humans in a decade (due to a flu virus that killed off most of the human population) and become involved in a tense conflict that threatens to ruin their way of life. Although the story follows both humans and apes, there is no doubt that the protagonists of Dawn are the apes. They propel the plot forward; it is their story arc that audiences relate to. We observe them as they mirror “human” behaviors such as establishing school for their young, creating laws such as “Ape not kill Ape”, using horses as a means for travel, and organizing hunts to feed themselves. Their way of life is reminiscent of human beings in the hunter/gatherer stage, enjoying the peace that comes with their isolation in the wilderness. With Caesar as their leader, the apes build their lives harmoniously. Maurice, Rocket, Koba stay loyal to Caesar and fight to the end for him. Life is ideal, which Caesar chalks up to apes’ inherently peaceful nature. Ape life is peaceful until humans cross into their territory.

Human survivors who take refuge in the ruins of San Francisco try to restore power to their city so that they can communicate with other survivors, and encounter Caesar’s group of apes in the process. While the tension between the humans and the apes grows, so does the tension amongst the apes. Caesar shows reluctant mercy to the humans, while Koba, Caesar’s second-in-command, believes that they should attack the humans before they are attacked themselves. The filmmakers do a wonderful job in establishing the character motivations behind the ape’s decisions. Because Caesar has memories of a caring human family that nurtured him, he offers the humans his help and strives to maintain peace between the apes and humans. Koba, on the other hand, is filled with hatred and disdain for humankind due to his years as a career laboratory ape. There is a great moment where Caesar tells Koba that he will allow humans to do their work, and Koba points to the numerous scars he has across his body to signify what human work entails. This is why he acts against Caesar’s orders and stalks the humans to convince Caesar that their motivations are sinister. Caesar tries his best to keep Koba in line, believing that Koba would not dare to act against him, but Koba shoots Caesar with a rifle and convinces the apes that humans were responsible. He uses the fear and panic of Caesar’s potential death to rally his troops and attack the human colony. The apes follow Koba because they feel they have no choice, and Koba becomes drunk with power. He becomes a military commander bent on creating destruction, a reality that is reinforced when he violates ape law and kills another ape.

This is where the biggest revelation of the film comes in, where the commentary of human nature becomes relevant. Caesar, having survived the gunshot, is heartbroken that his fellow ape would cause so much harm. He realizes that ape and man are not so different. This realization is relevant to the thesis of the entire series, which is to comment on the desire of living things to be superior to and in control of other species. Rise established Caesar and the apes the beacon of hope for the world, a group that found their sanctuary amongst the cruelty of man. Dawn counters by stating that the apes are no better than man, and are capable of the same darkness. That is the tragedy of this franchise and a hard truth to swallow by the viewer. When Koba kills the ape, all hope is lost. That is what initially discourages Caesar. That is what makes him hesitant to resume his place as the leaders of apes. But in the end, as Koba pleads to Caesar to save him from a deadly fall by reciting their most sacred law, Caesar concludes that Koba is no ape and that his life is not needed. It is a powerful truth to face, and one that hits harder due to the fact that it contradicts everything that Caesar fought for and believed all of his life. Dawn concludes with Caesar being embraced by every ape, handing over to him their loyalty and faith. He knows that Koba’s actions will not be forgiven by the humans, and he prepares for war. Suffice it to say, as I walked out of the theater for Dawn, I was ready to take in the next installment instantaneously.

Like the three years between Rise and Dawn, the past three years have flown by. Audiences around the world are eagerly waiting for July to see War for the Planet of the Apes. With the two trailers that have been released, we know a few things already. The apes and humans are deep in warfare. Maurice the orangutan is enchanted by a young human girl. A gorilla in Caesar’s army betrays him, and Caesar ends up being imprisoned by the humans with a gun to his head. I don’t feel mentally prepared to lose Caesar, but if his death is necessary to the story, then I will watch this film with a heavy heart. After all, their stories are why these films are appreciated, for writing powerful characters and fleshing out their motivations layer after layer to make the story unforgettable.