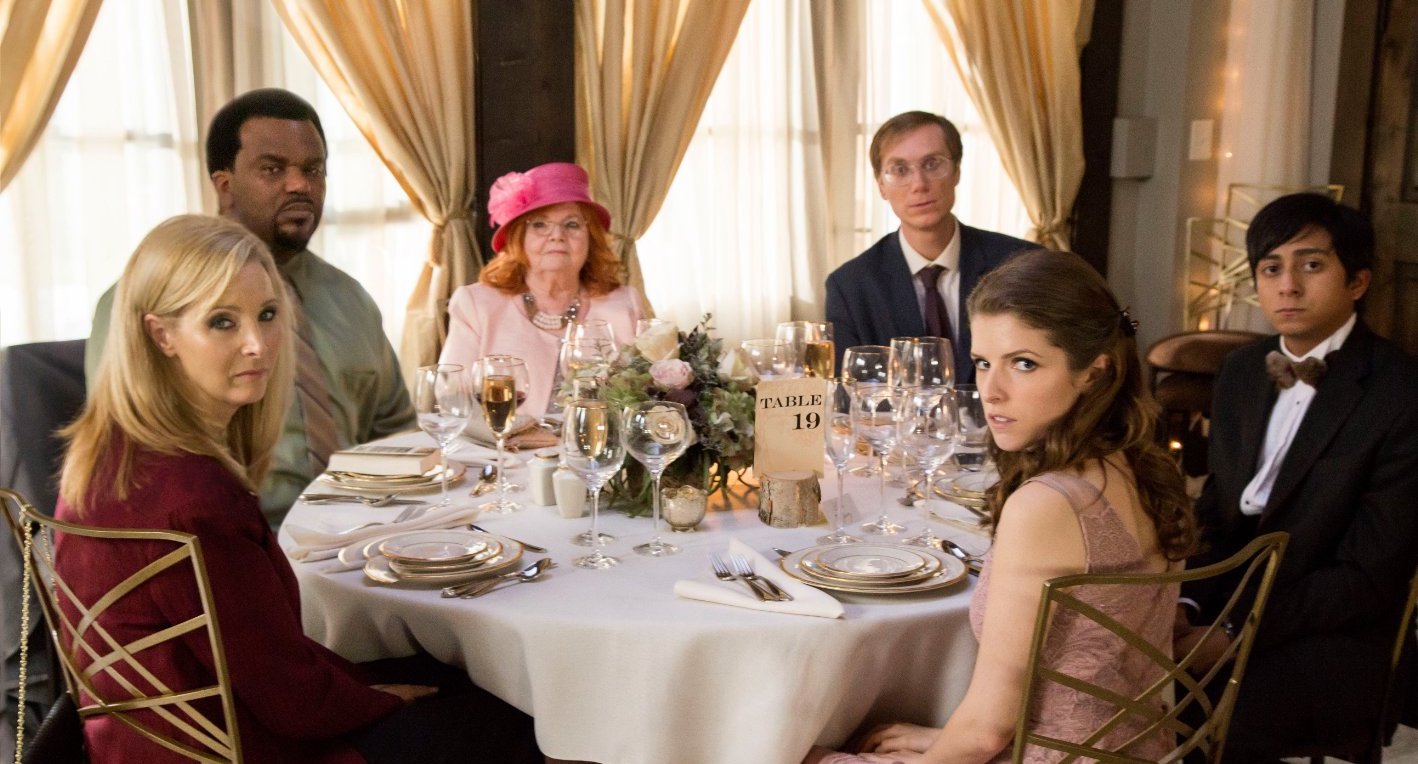 Nearly a decade after Jeffrey Blitz’s breakout debut, Rocket Science, the director is back with his second feature. On the surface, Table 19 has all the ingredients needed for a successful romantic comedy—a screenplay penned by dynamic comedy duo Jay and Mark Duplass, Anna Kendrick as the lead, and a setting prone to all sorts of drama—but a deeper look reveals that there isn’t much to chew on.

In Table 19, Eloise (Anna Kendrick) is faced with the decision of whether or not to attend her best friend’s wedding. This dilemma comes two months after Eloise was dumped via text message by her boyfriend, Teddy (Wyatt Russell)—who also happens to be the brother of the bride. Ultimately, Eloise decides to attend the ceremony. Unfortunately, it’s not until she arrives at the reception that Eloise realizes she has been placed at the table of rejects, along with the bride’s childhood nanny (June Squibb), a distant relative (Stephen Merchant), a married couple (Lisa Kudrow and Craig Robinson), and an awkward teenager (Tony Revolori). As Eloise vents her frustrations with the table, the other occupants start to second-guess their place at the wedding. However, despite taking a few twists and turns—and one destroyed cake—the table of strangers eventually discovers friendship.

There’s no questioning the comedic talent of brothers Mark and Jay Duplass. Their ability to explore human emotion and build humor through genuine human interactions is evident from their previous films. However, the duo fell flat in their latest endeavor. Although the premise of Table 19 offers an ideal scenario to generate humor through real-life conflict, the film relies on cheap jokes and overly exhausted bits of physical comedy to force laughter. The constant character stumbles and the surprising size of one character’s reproductive organ have no impact on the main plot of the story, yet these elements repeatedly find their way into the script. The one successful comedic bit of the story was the outfit selection for Kudrow’s character. Even though the striking resemblance between Kudrow’s attire and the wedding servers’ uniforms is reminiscent of an overused joke, the bit was accomplished with a surprisingly fresh approach.

Even with a few missteps, the strongest element of Table 19 is reserved for its cast. Casting director Rachel Tenner (Why Him?) deserves credit for assembling a group of actors diverse in age, gender, and race. Anna Kendrick (Pitch Perfect) shines as the emotional ex-maid of honor. She cries. She yells. She rises beyond her small stature to command the room, and the film would have benefited from giving Kendrick a more dimensional character to portray. Lisa Kudrow (Neighbors) and Craig Robinson (Morris from America) each have their moments, but the relationship between their characters is far from believable. Tony Revolori’s (The Grand Budapest Hotel) awkward, sex-driven teenager never fails to make the audience feel uncomfortable, and some of his scenes feel entirely scripted. The two actors who truly stand out are June Squibb (Nebraska), as the bride’s former nanny, and Stephen Merchant (I Give It a Year), as the convicted distant cousin. Squibb is both aggressive and sensitive, and she depicts a character audiences can relate to and sympathize with. Meanwhile, Merchant uses his towering height and giddy nature to change the complexity of any scene. Unfortunately, however, these incredible cast members became lost within Table 19’s forgettable story.

The film ultimately fails due to its narrative’s lack of believability. A number of plot points either arise out of the blue or are improperly foreshadowed, leading the narrative down unjustifiable directions. Even though they are briefly addressed earlier in the film, the lack of time spent on these elements doesn’t support their overall importance. This creates a convoluted story, which makes it difficult for the audience to connect with the characters’ emotional reactions. If the film stuck to the simple narrative of a young woman’s dilemma to either let go of her ex-boyfriend or to try and win him back, the outcome would be more genuine.

As far as romantic comedies go, Table 19 tries a little too hard to relate to its audience members. To recapture the success of his debut in his next project, Blitz should write his own script. There was certainly potential in the idea for this film, but unnecessary comedic moments and unbelievable drama make this a wedding too ridiculous for the big screen.