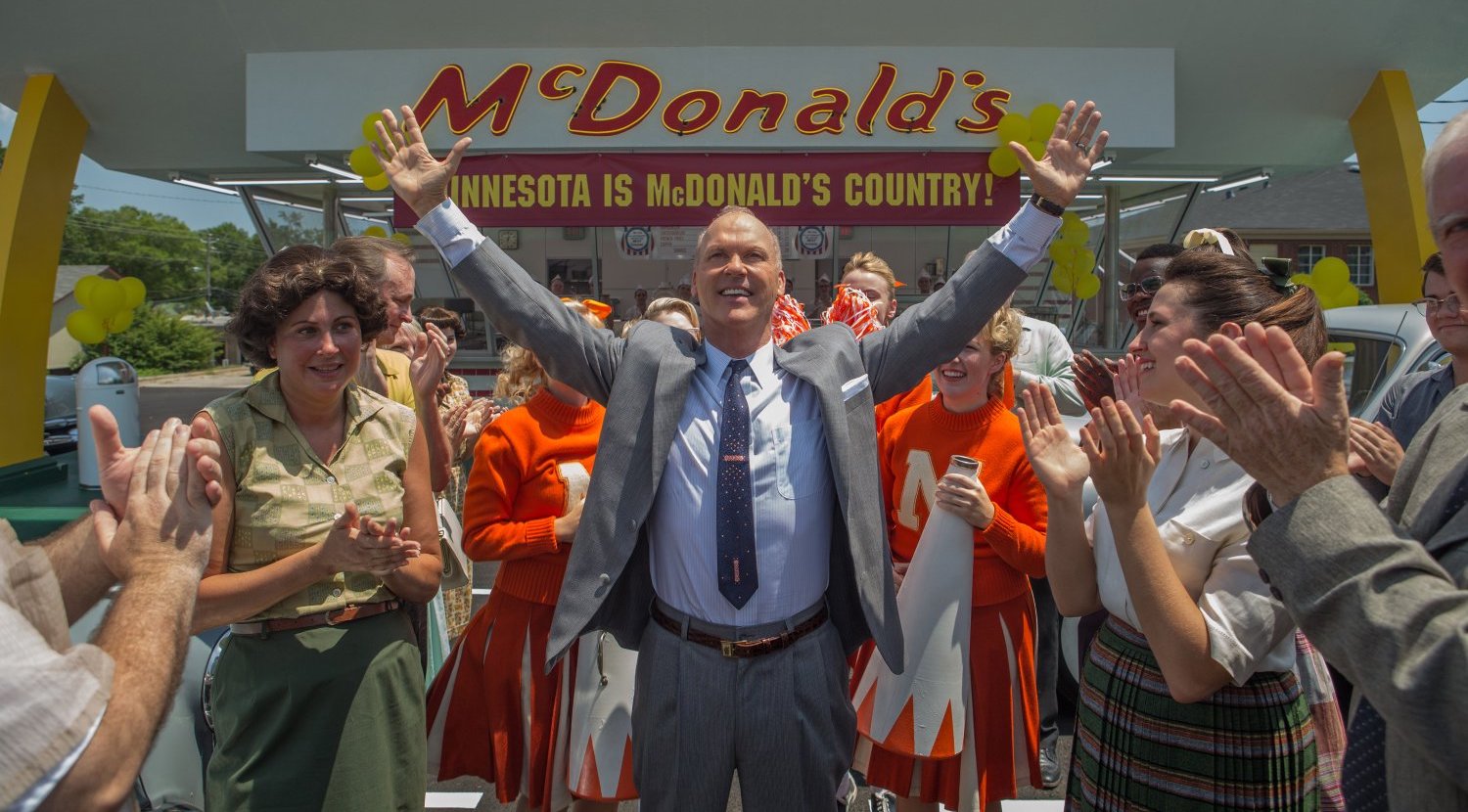 Michael Keaton Serves up Memorable Performance as The Founder

John Lee Hancock’s film, The Founder, delves into the origin of the burger empire, McDonald’s, through a story of deception, manipulation, and greed—now available for public consumption.

The Founder depicts salesman Ray Kroc (Michael Keaton) and his discovery of the fast food restaurant McDonald’s. When Kroc learns of a large equipment order placed by the single restaurant, he immediately drops his plans and drives cross-country to San Bernardino, California to inquire. Kroc’s fascination with the restaurant’s assembly line system leads him to conduct business with the McDonald brothers, Mac (John Carroll Lynch) and Dick (Nick Offerman). After pestering the brothers long enough, Kroc is able to convince Dick and Mac to franchise their restaurant. As the business starts to gain momentum, the McDonald brothers reach a tipping point with Kroc. However, their actions come too little too late as Kroc takes complete control of the fast food restaurant chain.

The biggest asset of the film is its lead actor, Michael Keaton (Birdman). Screenwriter Robert Siegel’s (The Wrestler) translation of Ray Kroc’s real life attributes provided Keaton with a generally unlikable yet relatable character to portray onscreen. Keaton’s ability to embody the mind of a seller is what ultimately brings the character to life. The Founder also boasts notable performances from John Carroll Lynch (Jackie) and Nick Offerman (Parks and Recreation), who serve as counterpoints to one another: Lynch as the anxious older brother and Offerman as the reserved but tough younger brother. Less impressive is Laura Dern (Certain Women) as Kroc’s wife, Ethel. This lackluster performance can primarily be attributed to the one-dimensional writing of her character. Regardless, Dern’s scenes are the least memorable in the film.

In addition to the acting, The Founder is greatly enhanced by Robert Frazen’s (Enough Said) editing. The cuts are smooth, except when dramatic cuts are purposely utilized—specifically, in the scene where the McDonald brothers share their story with Kroc and later, when Kroc formulates a way to market the golden arches. This first scene is a perfect example of the unlimited possibilities the medium of film offers. At first, the characters are placed in a restaurant, but as the two brothers divulge their past, the audience is taken on a journey of many years and miles with the use of both still photographs and video. Once the story is completed, the audience returns to the restaurant with an engaging history lesson fresh on their minds. In the second example, a simple montage is used to generate a relationship between notable symbols in American culture. The brilliance behind this particular montage is the audience’s ability to connect the dots along with Kroc so that when Kroc shares his idea for the golden arches, the audience feels as if the idea was stolen from right under their noses. Whether intentional or not, this serves as a moment of foreshadowing of Kroc’s relationship with the McDonald’s brothers.

The Founder also utilizes creative choices rarely seen in recent biopics. On more than one occasion, the film breaks the fourth wall with direct addresses by characters to the audience. In fact, the opening and closing scenes each include a direct address from Kroc, and in both instances, enormous insights are given into Ray Kroc’s manipulative personality. Conversely, Kroc’s charm and greed are showcased during a piano duet with Linda Cardellini (Daddy’s Home) who plays Kroc’s third wife, Joan Smith. The beauty of the scene stems from the balance of obvious sexual tension between the two characters in the foreground and a potential business opportunity in the background. These unconventional techniques help to separate The Founder from the plethora of biopics in today’s film market.

Aside from these successes, The Founder could improve on certain areas. One such example is Kroc’s personal life. Even though these scenes offer an additional perspective on Kroc, their repetitiveness and lack of development outweigh the information gained. Another instance is the first interaction between Kroc and his future business partner, Harry J. Sonneborn (B.J. Novak). Instead of having the two meet by virtue of an overheard conversation, the story would have benefited from a more organic situation. This particular moment stands out in the otherwise seamless progression of the narrative.

The Founder is an informative piece of cinema that greatly benefits from its lead performer, but the content of the film hinders its appeal. Unless they are McDonald’s or Michael Keaton enthusiasts, audience members can wait to see this one.