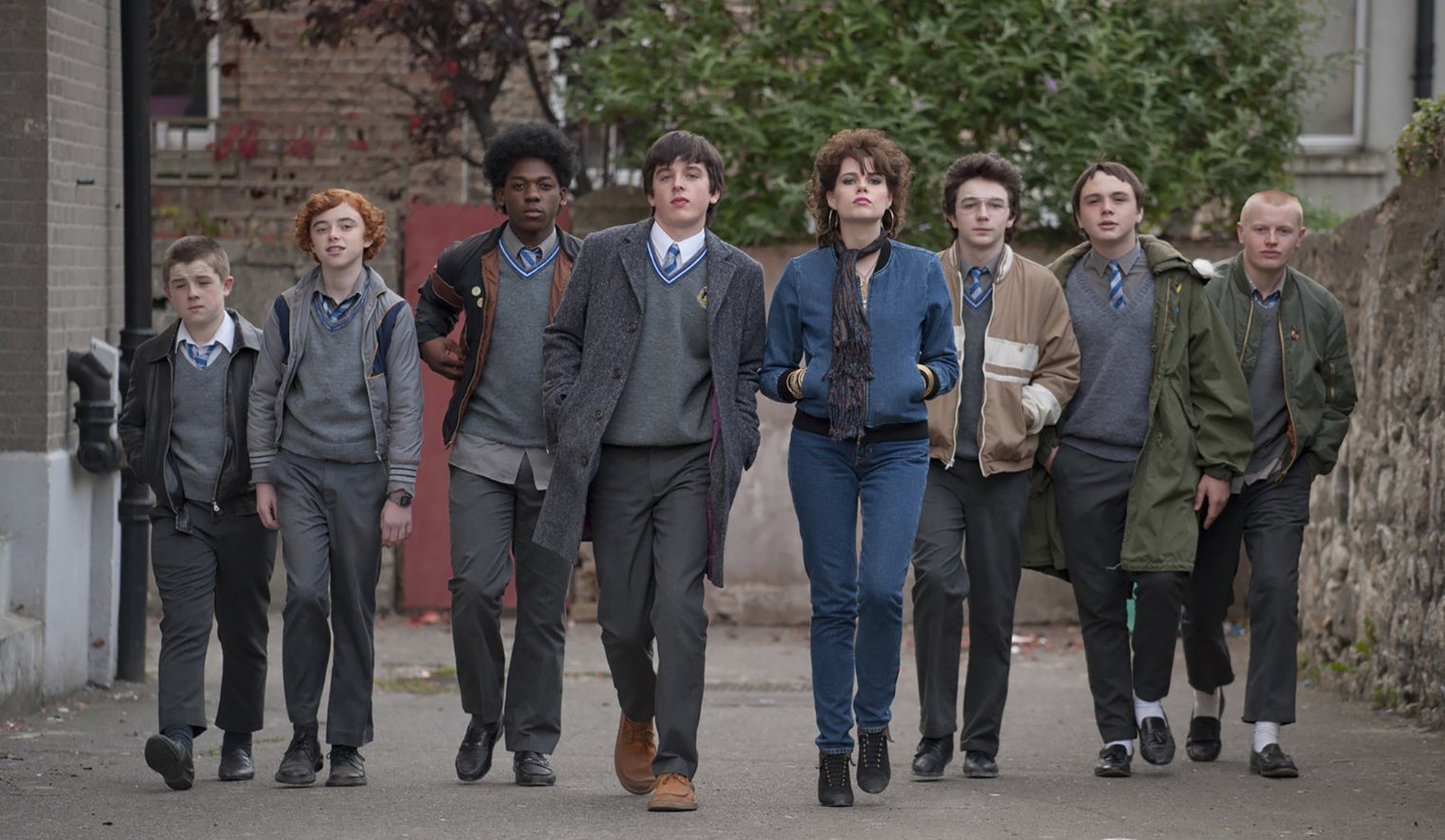 If you were to ask someone for a synopsis of John Carney’s Sing Street, they would probably tell you that the musical centers around a teenager who forms a band to impress a girl. But that summary misses the whole point. It would like labeling Rocky as a sports film, completely ignoring the dynamic between Rocky and Adrian. Sure, the story of Sing Street is incited by Connor, the protagonist, creating a band in order to find an excuse to hang out with an interesting girl from the neighborhood. But there is a guiding hand in this film that John Carney highlights on but many people seem to overlook. And that is the element of family in Connor’s life, most important the relationship between him and his brother Brendan, and how it affects his songwriting and his actions throughout the film.

In the very first scene of the film, Connor sits with his guitar. He is randomly strumming, try to match words with the tune he is working on. But he is interrupted by the sounds of his parents fighting somewhere in the house. Their yells are so loud that he has to shut the door in order to concentrate, and ends up giving in anyway by incorporating his parents’ argument into the song. And that is how it is throughout the rest of the film. As he goes about forming his band, writing music, and charming his crush, these small family moments are shaping him as a person, more so than his relationship with Raphina, his crush. This can be seen by the way Connor runs to his brother’s room to pass the time or to comment on his band’s songs. His brother is his teacher, more of a teacher than their father.

As a coming of age drama, Sing Street hits all the intimate notes about growing up, even in the 1980s. It shows the awkwardness of being a timid kid amongst bullies. The anxiety of going after your crush. Dealing with the growing dysfunction of your family while trying to hold on to the moments that made you happy. This musical is made up of those happy moments, the moments where all the family trouble melts away and the characters just exist in the moment. For example, there is a scene where Connor’s parents are arguing yet again, telling each other the worst thing they could come up with. Connor, his brother Brendan, and his sister Penny are together in a room, trying to drown out the noise. So Brendan turns on a record player. The three siblings start dancing despite the awkwardness and eventually create a pure moment out of a horrible situation. It is a scene worthy of a few tears because it feels as if the moment is infinite, for the characters and audience as well.

Like any film that deals with family drama, there are happy moments and tragic moments. John Carney makes a point to show those as well. He shows the severity of Connor’s parents’ arguments. There is a scene where Brendan and Connor are watching their mother have a cigarette on the stoop outside their home. They talk about how neglected their mother is, how their father cannot see how easy it would be to make her happy. They resent the little control they have to make things better, to guide their parents in the right direction. Additionally, towards the end of the film as Connor prepares to leave for London, he takes a second to softly say goodbye to his mother. The regret and sadness in his voice cannot be ignored. These are the moments that characterize one’s maturity, one’s coming of age. Which is why Sing Street is a film more about how big of a role family plays in one’s life than romance or love.

After the screen cuts to black, but before the credits roll, the words ‘For Brothers Everywhere’ flashes on screen. It is a message from John Carney himself, as Sing Street is a semi-autobiographical story based on Carney’s childhood. His message about brothers reoccurs throughout the film, in the intimacy of the relationship between Connor and Brendan. They are inseparable. They learn from each other, they guide each other. Brendan tells Connor about music, and he gets to live through Connor as he performs the way Brendan always wanted to. It is Brendan that Connor goes to when he decides he wants to go to London. It is him that Connor entrusts that secret too. And it is between the two brothers that the most revealing scene takes place with. After their parents announce that they are separating, Brendan gets frustrated. He tells Connor that as the older brother, he has had to deal with their dysfunctional family the longest. That Connor was just moving in a path that Brendan cut down, and while people praise Connor, they ridicule Brendan as a stoner or a nobody. It is a hard truth to accept for Connor. He had been so involved with the girl and the band that he took his brother for granted. That idea of how much a brother or sibling in general sacrifices for the younger sibling is something that resonates greatly to John Carney and myself, which might be why Sing Street touched me the way that it did.

John Carney’s Sing Street is an incredibly well rounded film for a coming of age drama. It covers many topics that comes with growing up from family to romances to friendships. Connor flirts with Raphina, watches television with his brother Brendan, and writes songs with his friend Eamon. He cries when hurtful things happen and laughs when creating art. But it is his family that shapes Connor more as a person. It is the lost behavior that Connor sees in them that makes him want to escape. It is his brother’s guidance that pushes him as an artist. It is his brother who throws his hands up and celebrates when seeing that Connor is on his way to London. Adam Levine’s “Go Now” plays during the last scene, and it can be said that the song is from the point of view of a parent or in this case Brendan who is telling Connor to go. Go live your life. Go be a kid. Go reach for your dreams. Go because if you don’t, you are going to be stuck forever like me. That message is so powerful that it overwhelms anything else in the film. Sing Street is a family drama, and one makes you want to show your siblings to let them know that you love them, and that you would do anything for them, even if it meant sacrifice.