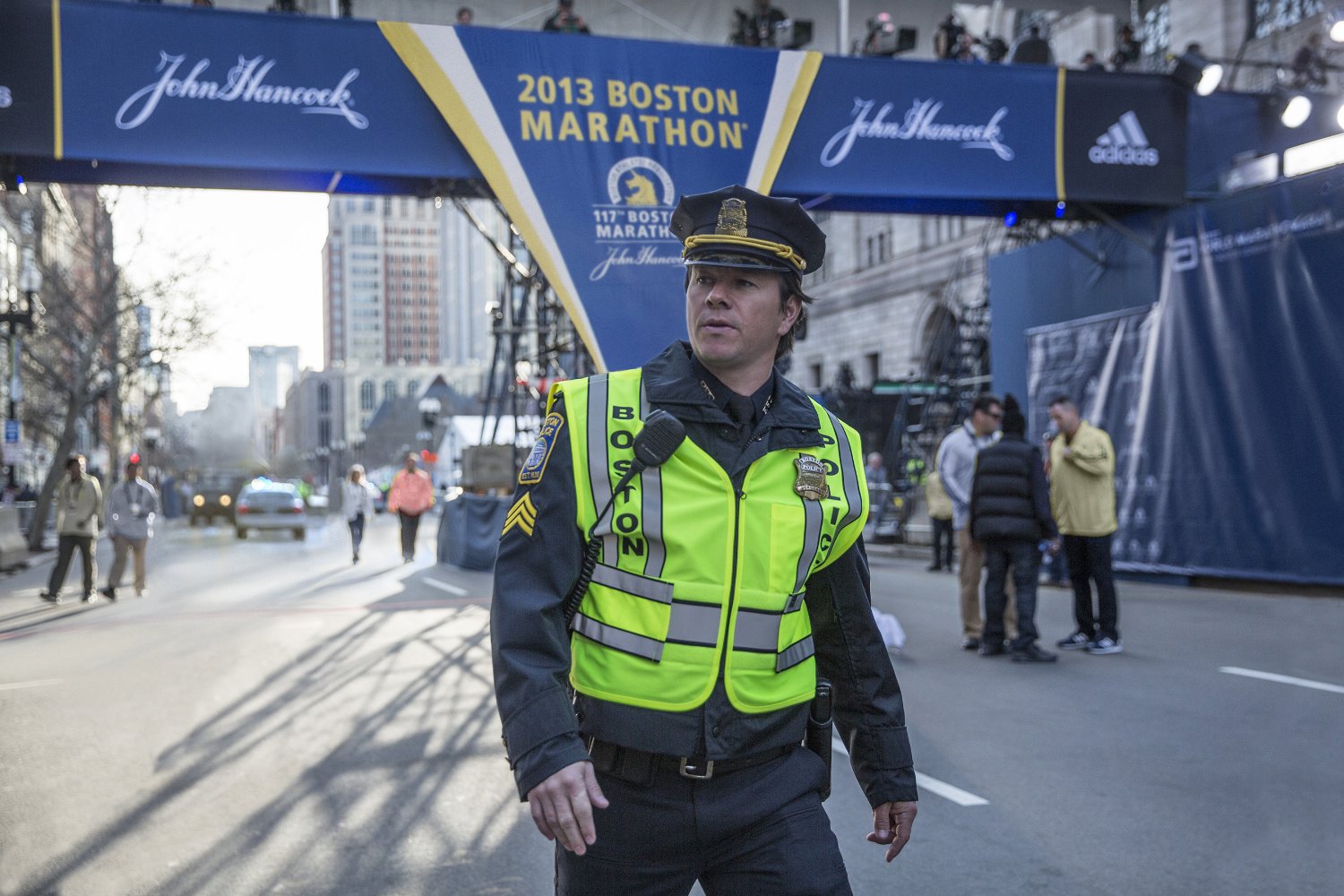 Berg’s cinematic exploration into real events began in 2004 with the release of Friday Night Lights, a movie that placed the audience into a small Texas town consumed by high school football. Over a decade—and three Mark Wahlberg collaborations—later, Berg has established himself as one of the premiere true story filmmakers in the business. In Patriots Day, Berg’s dedication to create an honest depiction of the material and his ability to balance emotion and action are exemplified.

Patriots Day recounts the events of the Boston Marathon bombings of April 15th, 2013 through the use of various perspectives: injured bystanders, law enforcement officials, an abducted male, and the two bombers. However, the main focus of the film is placed on the fictionalized police sergeant, Tommy Saunders (Mark Wahlberg), who serves as a first responder. Once the bomb sites are cleared, FBI Special Agent Richard DesLauriers, portrayed by Kevin Bacon (The Darkness, Cop Car), concludes the bombings to be an act of terrorism and subsequently takes over the investigation. Together, DesLauriers and Saunders uncover security camera images of the two bombers, but the identities of the terrorists remain unknown until a man abducted by the bombers, Dun Meng (Jimmy O. Yang), escapes from their control. With Meng’s assistance, the police locate and capture the bombers, brothers Dzhokhar and Tamerlan Tsarnaev, acted by Alex Wolff (The Standoff) and Themo Melikidze (Beautiful Something) respectively.

One of the largest draws of this film, other than the subject matter, is the cast. At the lead, Wahlberg is able to convey a number of emotions in a vast array of scenarios, which pushes his performance to the forefront. Patriots Day is also filled with memorable performances from J.K. Simmons (The Accountant, Whiplash), John Goodman (10 Cloverfield Lane, Love the Coopers), and Michelle Monaghan (Pixels, The Best of Me). Simmons and Goodman portray two real life law enforcement officials, Sergeant Jeffrey Pugliese and Commissioner Ed Davis respectively, which provides a sense of authenticity to the film. Monaghan portrays the wife of fictionalized Saunders, adding dimension to Wahlberg’s character. Although the supporting actors have limited screen time, they successfully add tender and laugh-worthy moments to their scenes.

This leads to one of the troubles of Patriots Day: pacing. Berg’s desire to include numerous real life individuals and storylines ultimately slows the opening act, thus delaying the bombings. This delay conflicts with the audience’s (potential) prior knowledge of the story. If this were a work of fiction, the character development in the beginning scenes would be more effective, but since this is a true story, the introduction of one character after another is less successful. Although it is important to establish the setting and the characters, several storylines could have been eliminated, such as the man with his child and the MIT police officer. Yes, these individuals were actually present during, and after, the events of the Boston Marathon bombings, but the flow of the film is hindered by their inclusion. This raises the question of whether or not it is more important to favor facts over art.

In terms of the technical aspects, the strongest element of the film is the cinematography. Tobias A. Schliessler (Mr. Holmes, Lone Survivor), a frequent collaborator of Berg’s, artfully utilizes the hand-held camera to convey the desired tone. This effect is also achieved by the addition of found footage. Although the images aren’t always perfectly composed or entirely in focus, the footage mimics a documentary, which heightens the sense of reality of the film. Conversely, a weaker aspect of Patriots Day is the music, composed by Oscar winners Atticus Ross and Trent Reznor (The Social Network). The trouble with the score is the way it directly supports the images. In other genres, this method might be more successful, but, in this particular project, the music often removes the viewer from the idea of the film as a documentary.

Ultimately, this brings us to the most important piece of the film: the ending. Now, by “the ending”, that does not mean the moment the bombers are captured, rather it refers to the mix of interview segments, videos clips, and photographs of the real life individuals portrayed in the film that are included before the end credits. These segments support Berg’s decision to use the various characters explored throughout the film, regardless of how irrelevant the scenes may seem in the greater context of the narrative. This is a story about Boston and the people who were affected by the events of April 15th, 2013. By utilizing the voices of the law enforcement officials and surviving individuals, Berg was able to honor those whose lives were lost by properly portraying the events of that day and of the days that followed.

Patriots Day is an excellent addition to director-writer Peter Berg’s collection of true story films, and although the story’s adaptation to the screen might not be perfect, the message is all that matters once the end credits roll.