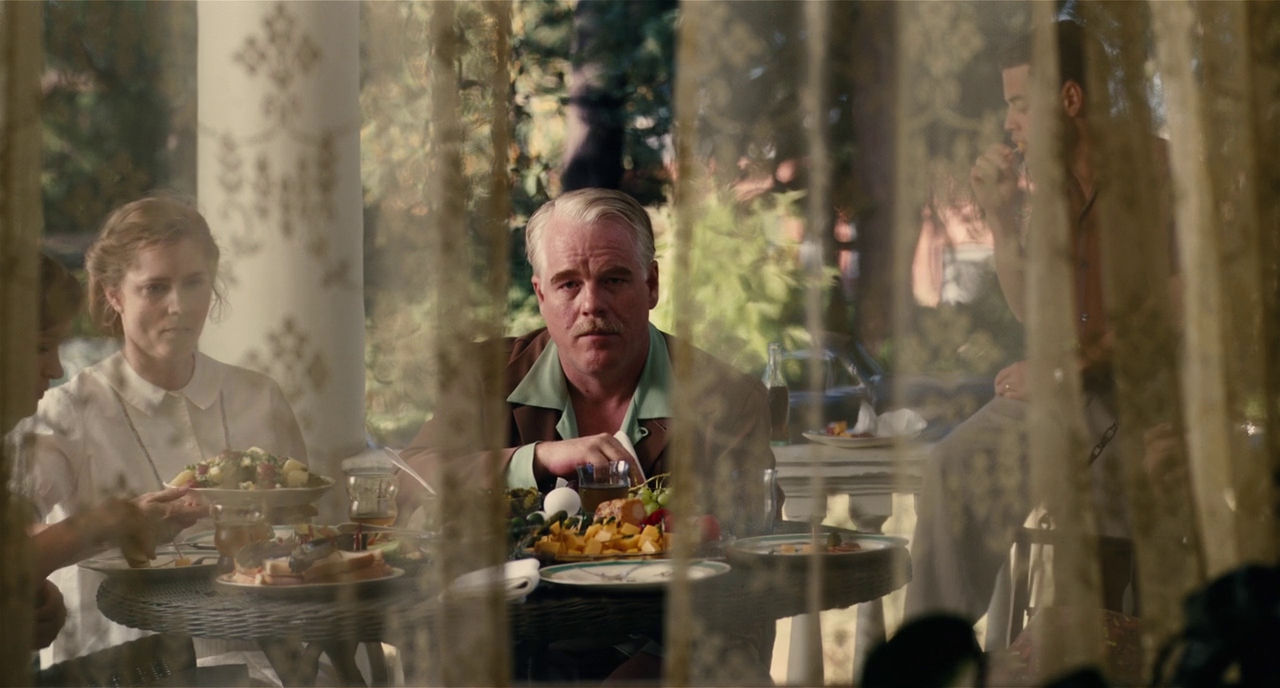 The Master: No Other Love Can Warm My Heart

An ocean. A sailor with a shifting, uncertain gaze. The opening moments of The Master immediately pull viewers into the strange world of a disheveled veteran. The soundtrack simmers with nervous tics—irregular rhythms, dissonant chords, and whimsical violin improvisations staccato the montage of raucous and sex-crazed sailors. This is Freddie Quell’s milieu.

Freddie (Joaquin Phoenix) soon stumbles onto Alethia, a ship traveling near San Francisco. He meets Lancaster Dodd (Philip Seymour Hoffman), the leader of a group of people enamored by his ideology-religion-cult: The Cause. The encounter between Freddie and Dodd changes them forever, resulting in one of the most mesmerizing and complex character studies in cinema.

Paul Thomas Anderson reaches the peak of his craft in The Master (2012), which navigates tensions that have fascinated artists for millennia: order versus chaos. The cerebral versus the carnal. A tight-knit community versus a free-spirited rebel. The setting is 1950s California, where ex-navy sailor Freddie wanders and wrestles with post-traumatic stress disorder. He is ruled by primal desires—sex, alcohol, aggression. Dodd immediately labels him as an “animal” who has “wandered from the proper path” while also inviting him to attend his daughter’s wedding and praising his moonshine-brewing abilities. Thus, a manipulative relationship is born.

The two “processing” scenes, central to the psychological tug-of-war in this film, show how Phoenix and Hoffman’s career-defining performances add infinite depth to these characters. Here, Dodd forces Freddie to divulge incredibly guarded secrets from his life through unusual exercises, like forbidding him from blinking or making him wander around a room for hours. Directly inspired by Scientology’s methods of stripping down new members to their most emotionally naked state, the questions reveal that Freddie has dead and insane parents, he had sex with his aunt multiple times, and—most importantly—he has been delaying a reunion with his one true love, Doris, for reasons he himself cannot quite understand.

Freddie is completely rooted in his physicality. He stomps his foot like a child when he accidentally blinks and Dodd pronounces, “Infringement.” In the second “processing” scene, Freddie kisses a window passionately and bangs on it with his fist in his fury-filled search to discover a secret that everyone else in The Cause seems to know already. Every twisting of his lip, every leg twitch, every pessimistic mutter that comes out of his mouth is fascinating. Freddie is restless and depressed at the same time, as if a gear that keeps his heart ticking is broken.

Anderson explores themes of codependent relationships, family, and belonging in beautiful ways. Though Dodd’s cult gives Freddie a home for a few months, we see that Dodd pines after Freddie more desperately. Freddie represents a version of Dodd who can behave as impulsively as he wishes. Towards the end, Freddie disappears from The Cause without warning. Dodd begs him to fly to England in one last attempt to woo him. He sings a cappella, “I want to get you on a slow boat to China all to myself, alone”—Hoffman chokes up, his face red. Phoenix sheds a single tear, but leaves.

The editing gives the film a fluid yet unpredictable feeling. Flashback sequences give the film an enduring spiritual quality, tying the structure with the protagonist’s desire to roam freely. The second processing scene, where Dodd pushes Freddie to his limits, is the best example of this. Freddie’s most intimate confessions—about Doris and his institutionalized mother—are weaponized against him, and he is singled out in front of all Cause followers to perform an irrational exercise for hours on end. Here, flashbacks paint a portrait of Freddie’s yearning for human connection and how he has been worn down by the war. With the climactic swell of the orchestra, we see Freddie in a naval battle, holding a cigarette fluttering in the wind. Then a shot of Freddie reading Doris’s letter in a hammock, tracing those beloved words with his fingers.

The soundtrack is exclusively classical and jazz music, evoking the soul of mid-20th century America. Velvety songs like “Get Thee Behind Me, Satan” and “No Other Love” imbue the film with tenderness and romance. But the soundtrack is also volatile—the score is rife with dissonance and woodwind solos with directionless melodies. Like Freddie and Dodd, who are both confused about how to live, strings and percussion battle each other, and embrace, ad lib.

Anderson also creates gorgeous cinematography through 65mm film stock and sweeping camera movements. The details from wide 65mm film—a rare choice in contemporary cinema—are crucial, capturing subtle facial expressions and period costumes vividly. The color palette is saturated with warm yellow and aqua blue, creating breathtaking shots of ocean waves and summer daylight. Finally, the momentous first crossing of Freddie and Dodd’s paths is recorded in one long take, shifting between the foreground and background multiple times to contrast Freddie’s isolation with the vibrant family atmosphere of The Cause.
The Master is eccentric, heartfelt, alluring, profound, and soulful. It gives us questions that leave us speechless, lost in thought—Dodd tells Freddie in their last conversation, “If you figure a way to live without serving a master, any master… you’d be the first person in the history of the world.” It is one of the finest masterpieces of the 21st century, a singular and formidable work that shapeshifts with every rewatch.

Nadia Eugene Jo is an undergraduate student at Stanford University majoring in Political Science and minoring in Creative Writing. She is a co-host of the film podcast “Criterion and Chill.” A passionate writer, Nadia loves producing creative nonfiction and poetry that incorporates reflections on powerful works of art. She is also a cellist who has performed at Carnegie Hall and the Concertgebouw. In the future, Nadia hopes to combine her passions for journalism, law, the Internet, and art. Her favorite films include Poetry, Persona, The Master, and A Woman Under The Influence.