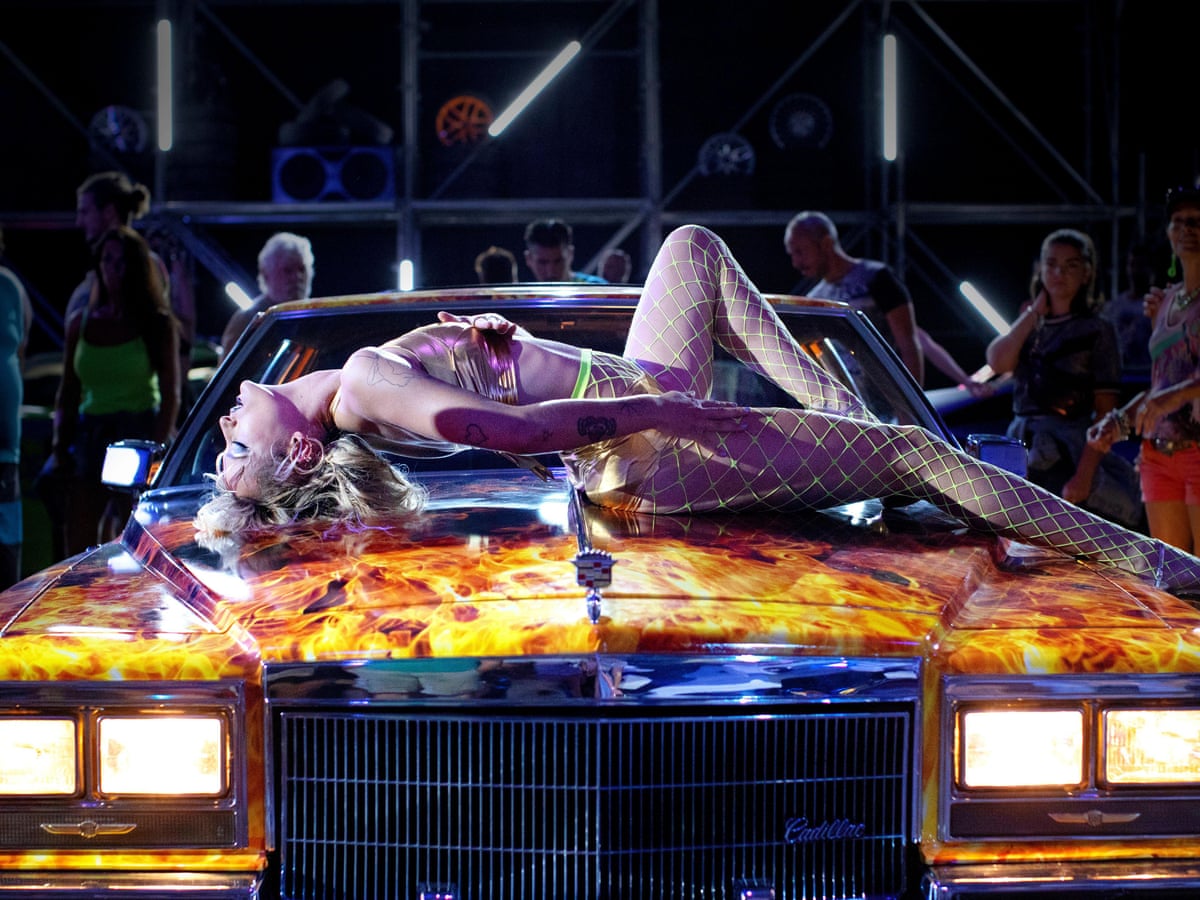 Titane: Automotive Sex, Trauma, & What it Means to Be Human

By Owain CollinsJanuary 24, 2022No Comments

Julia Ducournau’s French body horror film Titane (2021) has made quite a splash in the world of cinema. After winning the Palme d’Or at the Cannes Film Festival, audiences quickly flocked to theaters to understand the buzz surrounding the director’s sophomore film. Viewings resulted in shock and horror as Ducournau captured an absurd and eccentric story of love, death, and rebirth. Asking the question of what it means to be a man, woman, or human, Titane is a film that will not be forgotten by anybody anytime soon.

The film opens with a car crash. The accident results in a little girl having a titanium plate surgically drilled into the side of her head to keep her skull together (hence the film’s name Titane, which is French for titanium). Twenty years later, we see that little girl as Alexia, a car show showgirl who also happens to be a serial killer. The metal plate has made Alexia into a sociopath and engendered her attraction to cars and metal. This attraction is demonstrated in the most infamous film scene of 2021, when Alexia is impregnated by the car that she models with. After a mishap and a killing spree gone wrong, Alexia is forced to change her identity to hide from the cops. She poses as the missing son of a fireman, Adrien, and cuts off her hair, breaks her nose, and binds her breasts and pregnant stomach to do so. The fireman, a grieving father named Vincent, believes that Alexia is his son and takes her in.

Because Titane deconstructs gender in such an unusual and refreshing way, I’d like to clarify that I’ll be referring to the character of Alexia/Adrien as Alexia and using she/her pronouns. In interviews and articles I’ve read, the actors, crew, and interviewers do the same. And Agathe Rousselle, the actress who portrays Alexia, uses she/her pronouns as well.

Contrasts are very important in Titane. In the first half of the film, Alexia identifies as a woman, makes a living off of dancing in front of men, and is a mercilessly sexualized victim of harassment. After Alexia changes her gender identity while on the run from police, the expectations of “being a man” are forced upon her. One of the highlights of this transition is when Alexia (as Adrien) attends one of Vincent’s firefighter raves, and dances in the same way that she did when she identified as Alexia. The same kind of man who gazed lustfully at her in the beginning looked on in discomfort and disgust as they saw a male-identifying Alexia in her prime, doing what she loved most.

Many people have been discussing the symbolism of the film, asking: what does the titanium plate in Alexia’s head represent? Why does she become pregnant with a car? I have three main answers to these questions.

I believe that Titane represents generational trauma and how we as humans cope with that pain in its rawest form. The traumatic incident in the beginning was Alexia’s car accident, which caused her to get the titanium plate drilled into her head. As she grows older, Alexia tries to relive her traumatic experiences with cars by working at a carshow, as many people with trauma do. When she eventually has sex with the car, the thing that’s disturbed her all throughout her childhood now has implanted a life inside of her. In the end, when Alexia eventually gives birth to a baby with a titanium spine, the trauma that has shaped so much of her identity is passed on down to another generation.

One question that Titane poses regards humans and how we are defined. Does the metal plate in Alexia’s head still make her human? Does her pregnancy by a car and her sociopathic killings take away from her identity as a human? Titane’s nihilistic yet complex approach to identity is one that makes the viewer stop and think. Alexia’s body has gone through so many changes, from a titanium plate in her head, to her pregnancy, to her gender transition. Is she the same human as she was before all this, and are the changes for better or for worse?

Another strong idea that holds the film together is the idea of families. This is where Vincent comes into play. The only thing that we as the audience see Alexia’s parents give her are cold, unloving, isolating stares—similar to the way the firemen look at Alexia when she dances. When she comes home with Vincent after pretending to be his son, Alexia first has intentions of killing him and running away. However, she soon discovers a bond with Vincent that is stronger than any connection she had with anyone before.

Titane makes bold statements and depicts both loneliness and identity at their extremes. Alexia and Vincent are two lonely, lost people who have found comfort and solace in each other through the most insane circumstances. Julia Ducournau is truly a remarkable director for being able to make the audience sympathize and grow with a serial killer.

Owain Collins is currently a sophomore attending Interlochen Arts Academy for Film & New Media. Originally from Wisconsin, he spends most of his time watching and reviewing films as well as taking bike rides and drinking coffee. He is very invested in screenwriting and directing, hoping to have accomplished work in the future.