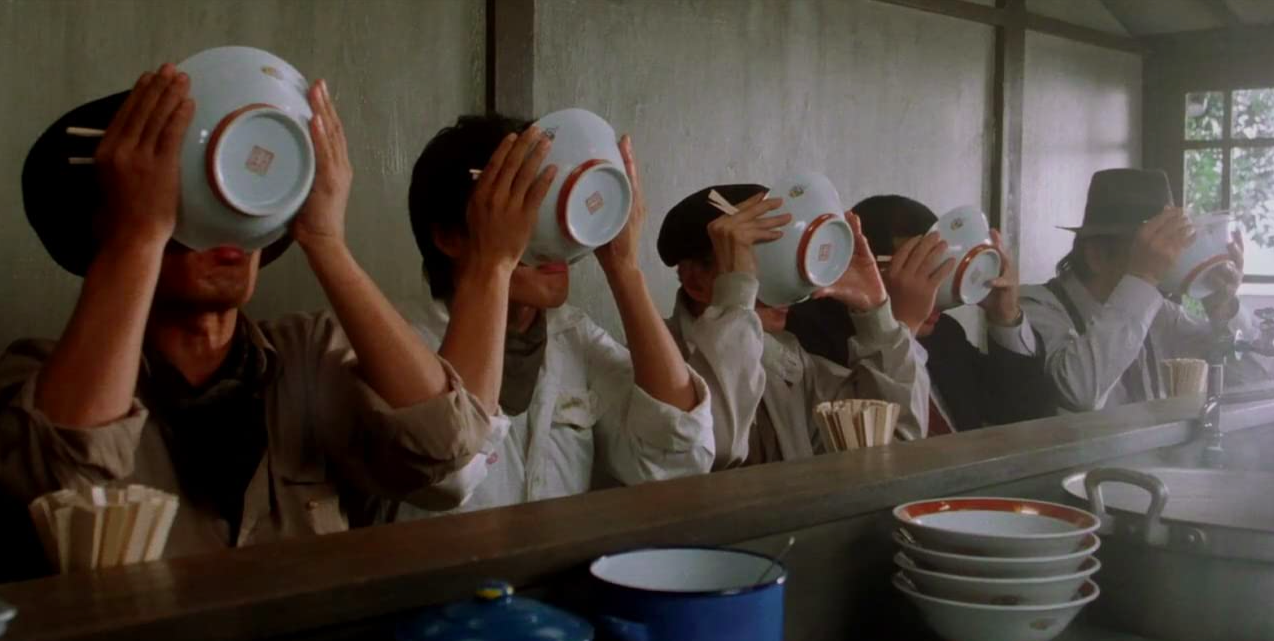 For me, meals in quarantine have become more than daily sustenance and everyday routine. Limited in my ability to explore new places, food—much like cinema—has become my ticket to faraway locations. As fate would have it, I found myself returning to an old favorite: Juzo Itami’s widely acclaimed film Tampopo, which marries the art of film with the art of cooking to produce a gesamtkunstwerk, or total artwork, of both cinematic and culinary delight. Operatic sequences choreographed to Liszt and Mahler artfully draw the viewer’s attention to even the most insignificant details of a meal—the jeweled beads of fat glistening in a bowl of untouched ramen or the soft, pearlescent meat of a freshly-caught oyster—making the film a feast for the eyes.

First released in 1985, the Japanese comedy centers around the story of Tampopo, a single mother struggling to make ends meet with a mediocre ramen shop. Enlisting the help of two truck drivers, Tampopo embarks on a quest to craft the perfect bowl of noodles. Over the course of the film, her entourage expands to include a rugged contractor, a wizened master who lives amongst vagrants, and a wealthy man’s chauffeur, who all aid Tampopo along her journey. Through side stories interspersed throughout the primary storyline, we also meet a whole host of other fascinating characters, whose narratives serve as momentary interludes between Tampopo’s adventures.

Beloved by culinary connoisseurs and film critics alike, much ink has been spilt lauding the film’s exquisite portrayals of food and its innovative genre-bending as the world’s first “ramen western.” However, little has been said about Tampopo’s dramatic transformation over the course of the film—that is, her own makeover. A commonplace trope in modern cinema, the makeover consists of a character’s metamorphosis from the mundane to the glamorous, often featuring a female lead. In Itami’s film, I want to suggest that Tampopo’s makeover conveys a broader message about Japan’s transformation into a prospering Westernized nation following World War II.

When the audience is first introduced to Tampopo’s restaurant at the beginning of the film, the ramen shop looks like a traditional Japanese izakaya, or Japanese bar: a red noren (fabric divider) hangs over the threshold of building and the modest interior features dark, weathered wood, with the only seating being a slim countertop attached to the kitchenette. A gang of angry-looking young men in black leather jackets are Tampopo’s only customers. The space is shrouded in shadow and seems relatively unfrequented—the reason, we find out only a few minutes later, is due to Tampopo’s rather lackluster ramen.

By the end of the film, when Tampopo finally perfects her ramen recipe, the shop is unrecognizable. With the help of her friends, the shop is demolished and remodeled into something that looks more like a French patisserie than a ramen restaurant. The dark wood is replaced with immaculate white tiling and smooth walls, also painted in white, the countertop is redone with a lighter maple-colored wood, and the surface is polished with varnish so shiny that it reflects light. But perhaps most striking of all is Tampopo herself—adorned in a tall white chef’s hat and a crisp white collared shirt, she appears tall and regal, a far cry from the mousy girl at the beginning of the film. The only item that remains from the previous shop is the vibrant red noren hanging over the shop’s threshold.

I was immediately drawn to the politics of such a transformation, noting the way the film seems to privilege Western aesthetics over Eastern aesthetics. In a lighthearted comedy like Tampopo, such a detail may not appear important to the film’s intended impact, but when considering the context in which the film was released, Tampopo’s Western-oriented makeover acquires a deeper political significance.

Released in 1985, Tampopo emerged on the market at the tail end of the Japanese Economic Miracle, which refers to the country’s accelerated economic growth following the end of WWII up until the end of the Cold War. During this period, Japan not only experienced exponential growth and industrialization, but also rapid Westernization as the Japanese scrambled to gain favor with the dominant Western powers following their defeat in the war.

It is no surprise, then, to see the West associated with progress and success in Itami’s film. Tampopo’s metamorphosis appears analogous to Japan’s economic “makeover” during the post-war years and seems to promote the hope that with hard work, diligence, and acceptance of Western norms, the country may be able to modernize and reclaim its dignity. The colors of Tampopo’s remodeled shop even evoke Japan’s national identity, with the red noren against the building’s white exterior acting as a mirage of the Japanese flag.

Other moments in the film also communicate the importance of complying with Western etiquette. At one point in the film, a band of middle-aged businessmen order food at a French restaurant. However, none of them appear familiar with the French items listed on the menu, save for the intern, who orders an elaborate à la carte spread, much to the chagrin of his superiors. Buried beneath the humor in this scene, there are layers of subliminal messaging: in with the new, out with the old, and a warning of the embarrassment to come if one fails to adopt Western culture.

Although we often perceive certain forms of media or genres of art as “apolitical”, Tampopo reminds us that it is impossible for any art work to remain untouched by the times, as all works of art are ultimately produced by real people, who are inevitably shaped by their surroundings. The implicit messages contained within Itami’s “ramen-western” comedy are staunch reminders of the politics inherent in all art and media. Amidst the political turmoil of the present day, such a reminder cannot be more timely.

Cammie is a junior at Princeton University, majoring in English and pursuing minors in Asian American Studies and East Asian Studies. She grew up playing the violin and piano, and as such, has always had a deep appreciation for the arts, but harbors a special appreciation for film due to its interdisciplinary and multimedia approach to storytelling. On campus, she writes and edits criticism for the arts and culture section of the school newspaper and a literary journal. Some of her favorite films include In the Mood for Love, Tampopo, Call Me By Your Name, and anything by Hayao Miyazaki.