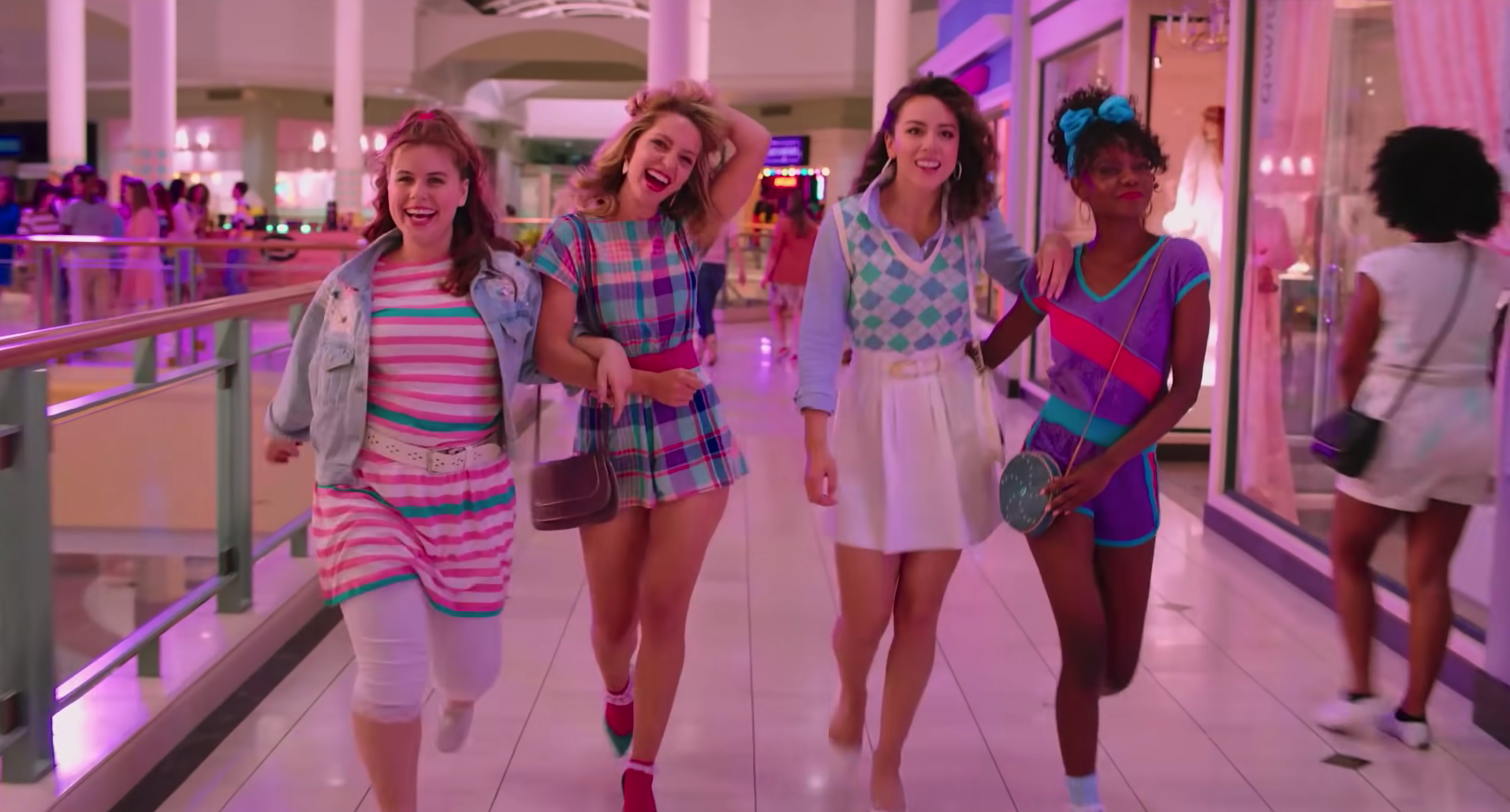 The 2020 film Valley Girl, starring Jessica Rothe and Josh Whitehouse, has a unique focus on teenage views of independence, appearance, sexuality, friendship, and pure love. The movie is far out and holds an innocence that can only be found if you go back in time at least 40 years earlier, when you could not break up with someone through a text message. Different from the 2020 remake, the original 1983 film centers around the complicated decision: should Julie stay with her obnoxious square boyfriend or take a chance on a punk rocker from Hollywood? While in the 2020 remake, Julie must decide to pursue her dreams and stop listening to the controlling voices around her in order to hear her own, the 2020 film engenders the nostalgic feeling of first love, appearance, and independence through the use of music and dance.

The plot centers around a popular young suburban girl by the name of Julie (Jessica Rothe), who is desperately trying to find her voice and become more independent. As the film moves along, Julie’s parents are introduced. Instead of the Woodstock-loving parents in the 1983 film; Julie’s 2020 parents are more regular parents whose only wish is for their daughter to go to Cal State Northridge University and be happy.

There is a brief and subtle moment when Mickey (Logan Paul) arrives at Julie’s house to pick her up. Julie’s mother (Judy Greer) says to him, “You don’t have to call me ma’am. I’m barely old enough to be a cool babysitter that you used to have a thing for.” This one-liner seems to be a reference to that awkward moment when the cougar mother tries to seduce Skip in the 1983 film. Yet, in this film, the script writers do an amazing job at making this reference as understated as can be.

A special moment in the film is when Julie and her dad watch Sally Ride go to space. He says to Julie, “I bet [Sally Ride’s] parents had some scary times… Always wanting to blaze her own trail, you know? But, damn I bet they’re proud today.” Julie’s dad finally understands how important it is for Julie to spread her wings and soar to New York City to pursue her dreams of working in fashion. This scene can also be seen as a reference to the 1983 film when Julie’s father (Frederic Forrest) gives her a speech about appearances. He makes a decent point about how appearances do not matter, yet Julie is still troubled by it. Returning to the beginning of the 2020 movie, we see Julie and her friends out shopping. This scene might not seem like much at first, but it means everything! It introduces the irony and comical nature of appearance, the main theme of the film. It is almost as if the movie was making fun of itself by introducing appearance through an optical lens as well as representing the hardships of what every teenager goes through in keeping up one’s appearance. This could make some viewers feel uncomfortable due to the vanity the film portrays. During the whole scene, the girls are too wrapped up in themselves and their visible appearances to focus on what is special inside. Eventually, however, the theme of appearance becomes subdued in the film and the theme of independence emerges.

Mickey (Logan Paul) is the blonde Ken doll type whereas Randy, Julie’s new love interest, (Josh Whitehouse) is a punk rocker with plenty of freedom under his belt. The boys live in completely different worlds. Randy is always friendly with people on the street when he drives with Julie and their friends around the streets of Hollywood. It becomes clear that Randy is popular in his scene, just as Mickey is popular in his. It is worth mentioning that Randy’s friend Jack (Mae Whitman) in the 2020 film is a female and a lesbian. In the 1983 film, Randy (Nicholas Cage) threw the word ‘faggot’ around freely, but in the 2020 film, when two boys called Jack a ‘dyke’, Jack socked one of the boys clean in the face for his disrespect. As the film progresses, Jack and Randy share a touching moment while singing the song Boys Don’t Cry. Their friendship seems to mend during this scene and Jack says to Randy, “Maybe we should go to New York anyway…”—portraying a classic ‘bro talk’ after a fight.

The songs that were sung in the film definitely had an euphoric effect and started off strong with We Got The Beat! As the movie moves along, Hey Mickey comes to light. In the 1983 version, Mickey is originally named Tommy and this change dramatizes Mickey’s character with a larger ego than Tommy ever had. Just after this song is Girls Just Want To Have Fun, to which Julie’s friends encourage her that she should have fun and just settle for what she already has. (Unlike in the 2020 film, Julie’s problem is that she must choose between a life being a married woman or a life of being free to follow her own dreams.) The use of this song not only brings forth a light and fun-filled dance routine, but also a perspective on Julie’s friends’ views on life and friendship. While Karen and Loryn sing with Julie; Sandy is left alone and Julie goes off to sing the rest of the song on her own to gather her thoughts. Sandy and Julie seem to be the closest out of the girls, and the song is just the beginning of showing the viewers how different Sandy and Julie are from the rest of their Valley Girl friends. The last song is Take On Me, which is played throughout Julie and Randy’s montage. The montage illustrates clips of Julie’s friends having fun without her, while Randy’s friends are seen waiting at band practice staring at the clock, feeling neglected by him. This song was a fantastic choice because it represented Randy and Julie’s new love blossoming while also embodying the isolation and neglect their friends were feeling. So the song played as a romantic ballad, while also playing as an instructional piece to not lose sight of friends and one’s dreams.

Sadly, I feel that the innocence of pure love has escaped our society today due to technology and the perks of just swiping right with just about anybody. It feels like there are very few magical movie moments in life because we are all constantly staring at a screen. It is already hard for many individuals to learn that looks fade and what lasts are the thoughts you share with others. But in a society where people value appearances, whether that be with looks, age, job or family, love that has potential could easily be destroyed by a culture that holds a candle to appearance. This is the obstacle that Julie and Randy had to work past by ignoring society’s expectations.

Indeed, it seems to me that Julie and Randy’s love holds a pure light that is no longer seen in real life or that many modern movies anymore. Their love reminds me of West Side Story and Romeo and Juliet, other examples of tragic tales where the lovers cannot be together due to opposing sides. Although in the 2020 remake of Valley Girl, Julie and Randy do come from two different worlds, their own superficiality is what initially holds them back. One of my favorite moments in the movie is the montage showing both of them talking to each other on the phone: Randy at a telephone booth, which requires him to pay, and Julie, stuck on her couch with her landline. Later in the montage, Julie happily creates new outfits in her sketchbook and Randy writes a new song—both are being supported by the other so much that their independence seemed to shine more brightly than it had ever before. At the end of the film when Randy and Julie leave the prom to do ‘everything!’, both their love and the beginning of their independent lives away from each other are emphasized. This little gem is another way the film showed its viewers how true love can be.

I attend San Francisco State University and am currently a Junior. This would be my first semester at SFSU as a transfer student. I have a newfound interest in Cinema, although I have always enjoyed musicals and plays of all sorts! The first movie I fell head over heels for was The Nutcracker Prince 1990 film and Peter Pan all versions and adaptations. I have a dream to be a screenplay writer, writer, social media content writer and or a movie critic. I have a powerful love for literature and writing! It will forever give me butterflies!