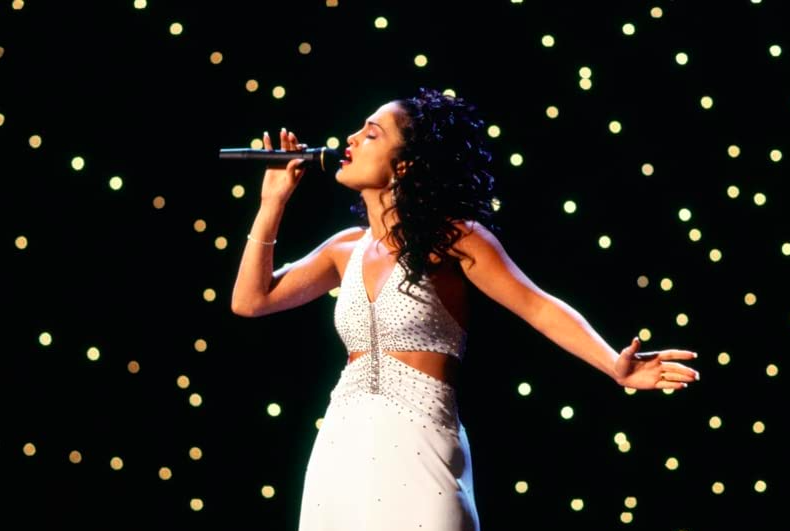 Selena: The Beautiful Life & Career of a Young Woman Taken Too Soon

If you don’t already know, Selena Quintanilla-Perez, also known as the Queen of Tejano music, was an American singer, songwriter, spokesperson, model, actress, and fashion designer. She was known for all of these things, but I personally came to know her through her music. Selena’s contributions to music and fashion made her one of the most celebrated Mexican-American entertainers of the 20th century. Most of all, as a Mexican-American, Selena is very important to the Mexican community. While I am not a part of the Mexican community myself, Selena’s music will always have a special place in my heart. I have so many favorite songs from Selena, but “Missing my Baby” and “Dreaming of You” will always have a special place in my heart.

Just experiencing this whole movie was so wholesome. I absolutely love Selena and I remember discovering her back in the 8th grade. Her music just gives me so much inspiration and always makes me want to get up and dance. I just love how they included her singing and Jennifer Lopez’s reenactment of her concerts. It was so bittersweet and it really did give me some sort of nostalgia. Selena was such an amazing soul, and this movie was a beautiful representation and celebration of her life.

Selena absolutely took me out. Jennifer Lopez, who plays Selena, perfectly fits the role for this movie in my opinion. The movie itself was amazing all throughout. Of course I didn’t know Selena personally, nor her family, but the movie made me feel like I did. The close connection I felt to Selena’s family towards the end really meant a lot to me because I know how it feels to lose a very close family member. I personally lost my father at a very young age back in 2009. So that is especially why this movie hit me really deep in the feels. Although my situation is definitely not similar to Selena and her family’s, it does allow me to connect to them on a profound level.

The film starts from Selena’s childhood, when she discovered music through her dad, all the way up to her last day. The timeline of this movie is laid out very neatly for us as the audience. It made me as the viewer happy to know that Selena’s father (Abraham Quintanilla) was one of the producers for this movie. The fact that Selena was made only two years after her death is a testament to his strength.

Watching the film definitely made my mind drift away from the COVID-19/quarantine era in the present day. It’s crazy for me to think about how the movie was made in the nineties because I wasn’t even born back then, so I think that the movie is a testament to how much of a large impact Selena has had. She still has a powerful impact on kids in my own generation, and the longevity of her legacy just fascinates me. While Selena’s life and her career were cut short, I’m just thankful for movies like these that allow us to learn about people who came before us.

It’s crazy to think about where Selena would be right now if she was still here on this Earth. In my opinion, her career would still be growing and growing and she would have kids, just like she always wanted! Her death towards the end of this film felt very unexpected. Even though I already knew that Selena passed away a long time ago, her death still really hit me hard, and witnessing it again onscreen really did hurt. Selena was such a beautiful person to begin with, and her career was skyrocketing. And yet, her life was unfairly taken from us and this world.

In the ending, I really felt for her family because I couldn’t even imagine having someone so close to me like that being murdered like Selena was. The scene in the hospital, where the doctor came to her family and announced that she passed away, was very sad. The whole family just immediately broke down. Even though this was just a movie, it felt like I was in the story the entire time and I just really felt for the family as a result. It broke my heart to see them hold onto one another and lift each other up. The film really made me think about what her family in real life must’ve felt when she died. The saddest moment for me was seeing Selena’s husband, Chris, starting to cry as he stood facing the wall, turned away from the camera. Selena’s sister Suzette had to hold him up and give him a hug and that just felt too real. Movies like this really get me because it is like I was witnessing all these moments with the characters and through them.

The ending was a paid tribute to Selena through a flashback of many videos and photos of her during different time periods of her life. My favorite part of this tribute was seeing the clips of Selena throughout the years and seeing her look so full of energy as she performed. Artists like her really make me smile because they truly love what they’re doing. On the other hand, I cried as I watched the candlelight vigil. Selena had so many fans, especially young fans, who loved her so much, and I can’t even imagine how devastated they were finding out firsthand about her death. It was difficult to watch because I can’t imagine, still, how the family was feeling. Selena was just absolutely amazing and didn’t deserve to go through what she did. Selena was amazing because she was so talented, such a kind and beautiful soul. Some of my favorite things about Selena are her outfits and how she used to dress. I truly love her burgundy purple dress and her cow-themed pant suit; they were super cool and creative. It’s amazing how Selena used to have her own name-brand clothing boutique. I would have loved to shop there.

Selena also made me think about how the actors were feeling as they shot the movie. I wondered if the emotions hit them as hard as it did for audience members like me. Nonetheless, the movie was just so good to begin with, and the acting was great. I would truly recommend it to anyone who doesn’t know who Selena is, or is seeking an inside scoop of what her life was like. This movie is for anybody, really, especially if you didn’t grow up during Selena’s life. It’s just good to be able to remember people through movies, including every moment of their life that builds up to their passing.

Hi! My name is Lydia Rodgers and I am currently attending Interlochen Arts Academy, located in Interlochen, MI. I am currently in the 11th grade, and I am from Clinton, Maryland. I grew up with so many people at home, up to the point where we had a full house. I’ve had so many people in my life that guided me every step of the way of life, up until now. I am the youngest of 5 kids so that has always been very important to me especially since I can look up to them for advice and they know life a little better than I do. Before film, writing all kinds of stories, poems, you name it has always been a part of my life. For my first two years of high school, I was at Suitland High School back at home, and I had also gone there for film. One of my brothers are actually doing things in the film industry, and he also went to Suitland for film. Film and writing will forever be apart of my life, and I can’t wait until I get older to do my work in the real world.