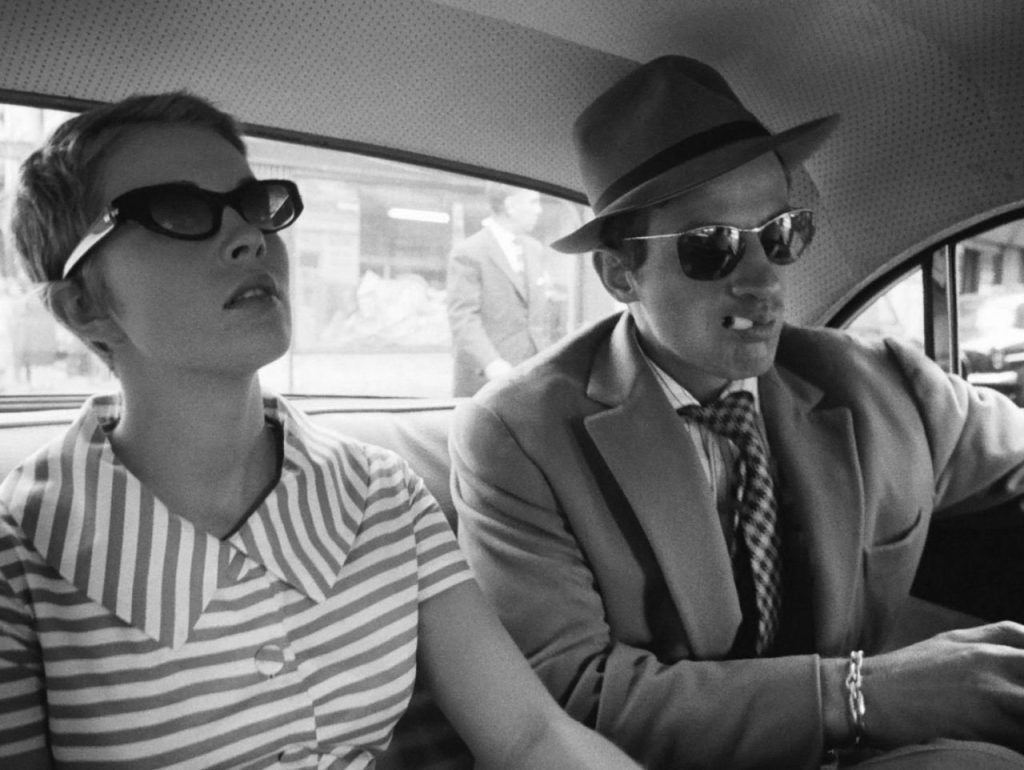 The Fresh Irreverence of the French New Wave

Widely regarded as a harbinger of the French New Wave, Jean-Luc Godard’s À bout de souffle (1960) follows a young man who eludes authorities as he chases a woman he claims to love. To describe it as a love story or crime drama would be an oversimplification, however, as the film subverts many of the elements that distinguish classical Hollywood cinema. Not only does it shun classical Hollywood’s traditionally linear format of storytelling, it also sabotages any prospect the audience has of identifying with its protagonists. The tone of À bout de souffle is, above all, irreverent, which it achieves through its largely static storyline and characters, unconventional and conspicuous camerawork, and jarring editing. We can observe the differences between French New Wave film and classical Hollywood cinema by analyzing À bout de souffle in relation to Rear Window (1954).

À bout de souffle refuses to pigeonhole its characters: Michel and Patricia have half-baked goals and desires, frustratingly static storylines, and virtually no arc. In comparison, the motives and roles of Rear Window’s protagonists are unambiguously defined from the start. We are first introduced to Lisa through a glamorous, soft-focus close-up of her face. Her appearance in the middle of the night, looking as if she could be a part of Jeff’s dream, establishes her status as the love interest—and this is a role she remains faithful to all the way to the end of the film. The characters are well-developed while still allowing room for growth; their traits and dilemmas—Jeff’s restlessness, Lisa’s romantic frustration—become propelling forces of Rear Window’s narrative. Beyond the film’s immediate storyline, Jeff and Lisa also conform almost perfectly to socially-prescribed gender roles: Jeff is a daring photojournalist, and Lisa is a beautiful socialite with an enviable wardrobe.

Michel and Patricia’s identities aren’t nearly as well-developed, though our introduction to each character certainly seems to portray them as a “type”. One of the film’s opening shots is a medium close-up of Michel: his hat is just crooked enough to be cool, and a cigar dangles out of his mouth as he flips through a pinup newspaper. His persona, or rather, his desire to embody the American gangster, is obvious. As the film progresses, however, Michel’s suitability to the gangster lifestyle grows increasingly dubious. His efforts to capture love and wealth are thwarted: trying to seduce Patricia gets him a slap in the face and chasing down the money he’s owed leads to one mundane phone call after another. At first glance, Patricia, too, appears to be an independent woman: in her first shot, she wears a shirt that clearly identifies her as an American in a foreign country and continues to provide the audience with eye-catching visuals throughout the film with boldly striped dresses and statement sunglasses. And yet, her musings reveal an indecisive woman who is vacillating between lukewarm lovers, unintentionally pregnant, and financially supported by her parents. Michel and Patricia’s appearances are more concretely defined than their personalities; their clothes and personas demonstrate that they’re experimenting with different identities, rather than staying within fixed roles designed by society.

Rather than capturing them at their most heroic or most admirable moments, the film chooses to portray Michel and Patricia at the moments that make them the hardest to understand. Michel’s peculiar gesture of rubbing his lips with his right thumb becomes one of the film’s motifs: it occurs once before Michel robs a car in the first scene, once again as Michel peers at a picture of Humphrey Bogart, and yet again after Michel dies, when Patricia imitates him. But unlike Rear Window’s motif of the camera, which represents Jeffries’ career, peeping tom nature, and eventually, his last line of defense, the meaning of Michel’s gesture remains a mystery. It’s hard to know whether Patricia’s imitation of him at the end of the film is a tribute, a slight, or a form of experimentation.

The nebulous characters of Michel and Patricia contrast sharply with the personality of the camera, which constantly grabs the audience’s attention in the way it moves and frames its subjects. The camera functions less as a fly on the wall and more as an active contributor to the story. When Michel is speeding down a country road, for example, he talks to the camera as if it is an acquaintance sitting in the passenger seat. Michel’s breaking of the fourth wall is startling—effectively disrupting the narrative flow of the story. Rather than focusing on what Michel is saying, it’s easy to begin contemplating whether Michel knows he’s being filmed (making his personality his effort to impress an audience) and what function one serves in the story as a viewer if Michel can see through the camera. On the other hand, Rear Window never explicitly crosses the boundary between the viewer and the story that unfolds on-screen. Rather, the film uses metaphors and the audience’s identification with Jeffries to encourage the audience to reflect upon their own “spying” behavior.

Making the viewer identify as a character in the car with Michel through breaking the fourth wall becomes all the more confusing when Michel is then shot from a succession of seeming random angles: at one point, we are sitting in the backseat of the car as Michel grumbles about the traffic, then, we see Michel’s car from the perspective of someone who is driving in front of him, then, we’re sitting shotgun next to Michel, and then, we’re standing on the side of the road as Michel’s car zooms past us. The camerawork of À bout de souffle, with its tendency to jump from perspective to perspective, encourages active spectatorship by purposely confusing the audience. Rear Window, by contrast, is almost entirely shot from Jeff’s perspective—so the audience always knows just as much as its intelligent, observant protagonist, or is given clues that keeps it a few steps ahead. With À bout de souffle, by contrast, we never know more than the film’s characters do. Rather than giving the audience a privileged status, À bout de souffle simply treats it as another character in the film.

The playful, irreverent style of À bout de souffle is generated by its harsh, sometimes shocking editing reminiscent of Soviet montage. Like the camerawork, the editing emphasizes discontinuity and disruption; as opposed to the “invisible editing” style of Rear Window, it seeks to make itself known. This is aptly demonstrated by the jump cuts that punctuate Patricia’s conversation with her other lover, which resemble fast-forwarding on a TV—Godard could have written a more succinct dialogue for the scene, but instead decides to use a technique that makes the audience aware of his decision to eliminate the boring parts of the conversation. Our main takeaway from the scene is not that Michel must compete with another lover, but that Patricia is spending time with yet another man she doesn’t love—hence the jump cuts that reflect her restlessness and impatience. The casual, almost arbitrary style of editing also reflects the way the protagonists of the film communicate. In the scene where Michel drives Patricia to her rendez-vous, for instance, Patricia never follows through with her serious existential questions—she switches from asking about Michel about his sadness to inquiring about French language conventions. Their conversation is one that merits neither continuous editing nor framing that would’ve allowed the audience to see both of their faces, rather than just the back of Patricia’s neck. The meandering, meaningless conversations that constitute the majority of the film contrast with the clever banter between Jeff, Lisa, and Stella, which is often accompanied by editing that is just as slick and efficient—it never interrupts the flow of the conversation or the tightly interwoven scenes that compose the story.

À bout de souffle’s fresh irreverence comes from its subversion of Hollywood techniques and tropes employed by films such as Rear Window. The nebulousness of Michel and Patricia’s characters, the casual breaking of the fourth wall, and the conspicuous presence of the camerawork and editing, could all be seen as a rejoinder to the perfectly developed, continuously edited narratives churned out by Hollywood studios. Godard’s film is, after all, a critique—simply another medium he used to engage in film criticism.

By the end of the film, it’s hard to tell if we were given too much information about Michel and Patricia, or if we were given too little. Would more context have made these characters more palatable, or at least more comprehensible? Or perhaps, is Jean-Luc Godard pushing us to question the way naturally messy, complex humans have been presented as the neatly packaged characters that populate the Hollywood universe?