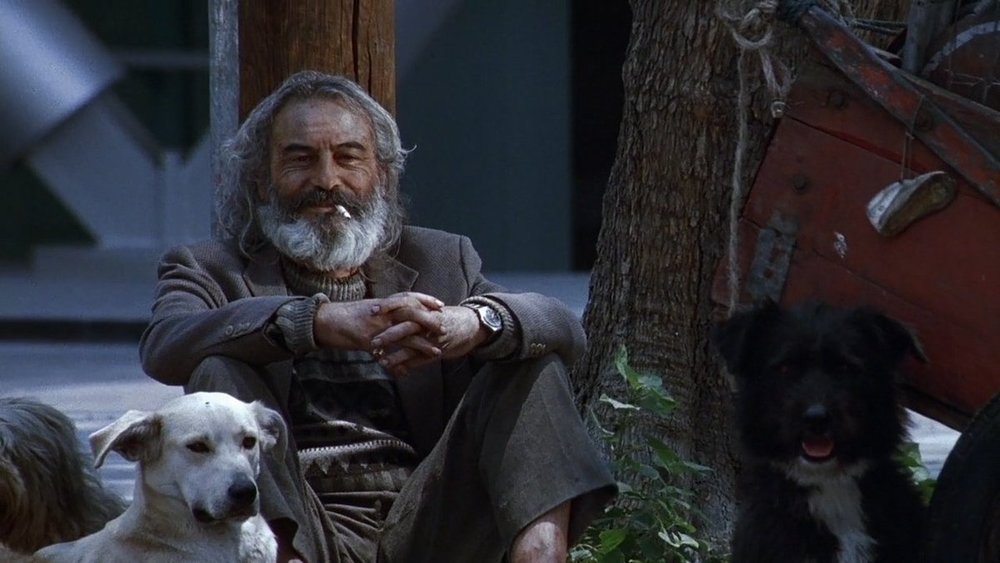 Amores perros:
The Confinement of a Corporeal Existence

You know what my grandmother used to say? If you want to make God laugh… tell Him your plans—Susana, to Octavio.

Characterized by gritty cinematography, a harshly neutral background that clashes rudely with rare flashes of warmer tones, and shaky handheld camera movement that imbues each of its loosely interwoven storylines with a sense of instability, Alejandro González Iñárritu’s Amores perros (2000) revels in the less-than-glamorous aspects of life in Mexico City. The film is centered around three characters: Octavio, a young man infatuated with his brother’s wife; Valeria, a model and socialite; and Chivo, a street bum-turned-assassin. As the beginning of the film establishes each character’s chief preoccupations—Octavio’s love interest, Valeria’s cosmetics endorsements and fiancé, and Chivo’s man-slaying, dog-saving lifestyle—their worlds could not seem farther apart. Ultimately, however, their paths cross in a violent car crash that alters all of their lives permanently.

The film does not emphasize narrative ties between characters, or the effects that one character’s actions has on another, but rather, the thematic threads that run through every character’s lives. By employing visual techniques such as cross-cutting and embedding common themes in each narrative, Alejandro González Iñárritu encourages the audience to draw comparisons between characters. The car crash is what pulls the three characters into the same physical space, but the common thread of their seemingly disparate lives is their possession of dogs. As the story progresses, and Amores perros reveals the critical link between power and the possession of a body, it becomes clear that the dogfights are an allegory for the human condition. The violent fates of many of its characters—portrayed through unrelenting images of battered and bloodied bodies—shines a light on the predicament of having a corporeal existence. Amores perros poses the fundamental question: do our bodies trap us or enable us? What does it mean to have control over someone else’s body, and is it ever possible to have control over one’s own?

The most obvious examples of souls being imprisoned inside bodies are the dogs themselves. Fiercely loyal and unable to communicate or consent, the dogs in the film are acutely vulnerable to human abuse. The disposable way in which they are treated becomes apparent in the dogfight montage, where every dog that Octavio’s Rottweiler Cofi reduces to a bloodstained carcass is quickly replaced by another. Even Valeria’s lapdog Richie, whose plush lifestyle is undeniably better than the tortured existence of any fighting dog, suffers the consequences of human negligence when he becomes trapped under the floorboards of a poorly maintained apartment. The difference between Richie and Cofi’s conditions, of course, is that Valeria shares in Richie’s pain. By contrast, while Cofi’s allegiance to Octavio is initially forged through Octavio’s kindness and role as primary caregiver, their relationship morphs into one of abuser and victim: Octavio exploits Cofi relentlessly as his greed for money quickly overtakes his regard for his dog’s well-being.

The lives of the women in the film parallel that of the dogs. Susana, for one, is utterly defenseless against her abusive alcoholic husband Ramiro. She is often forced to place herself between him and her baby, even when doing so results in her getting her earlobe torn off. Susana holds no more power in her affair with Octavio, who proclaims his love for her even as he employs a grabby, insistent manner of demanding sex. Things seem to be different with Valeria, the character we first encounter through the hazy sheen of Jorge’s desire as he watches her on the TV screen: in Jorge’s eyes, Valeria lives a fantastically glamorous, well-manicured life that exists independently from the violence that characterizes his own. Indeed, when we see how beauty has won her product endorsements and TV interviews; Valeria initially seems to be the one character whose body services independence and autonomy. After the car crash confines her to a wheelchair, however, and the body that gave her a career and a boyfriend becomes a prison cell of physical agony and broken dreams, Valeria’s reliance on her body becomes a curse. Furthermore, Valeria’s relationship with her partner contains familiar tinges of misogyny—Daniel pressures her into sex as soon as she comes home from the hospital. The similarity between Valeria and Susana’s lives suggests that women’s bodies subject them to constantly being expected to provide care and physical pleasure, with no easy way to say no.

Though the male characters are responsible for instigating and perpetuating violence in the narrative, the film’s editing suggests that they, too, suffer a degree of physical confinement. The cut from Octavio cowering in the shower after being beaten by Ramiro to a bleeding dog mirrors the cut from the victim of the first dog fight to the meat that Octavio’s mom cooks in the pan. The film’s messaging is clear: Octavio is no different from the dogs doomed to fight to their deaths in the ring. These edits highlight a “dog-eat-dog” world where no one is at the top of the food chain, as each is beholden to another in some way. The men hold the position of “owning” others, but using another’s body almost always proves to be a risky endeavor with dubious benefits. Octavio’s possession of Cofi gives him money and power, but eventually becomes his downfall. Similarly, both Ramiro and Octavio thought they controlled Susana, but neither of them could prevent her from acting of her own will (first having an affair with Octavio and then ditching Octavio to stay with Ramiro). Susana’s betrayal of Octavio is especially heartbreaking, as Octavio’s competence as a father, loving nature, and good looks make him the ideal hero. However, even he does not have agency over his own narrative: despite being the Prince Charming, Octavio does not end up getting the girl.

Chivo provides a counterpoint to the characters who are possessed by or beholden to others. Any shot of Chivo as he roams the streets of Mexico City—looking dirty, unkempt, and out of place in “civilized” society—is likely to inspire pity. Similarly, the socioeconomic chasm between Chivo and his clients (slickly-dressed business partners whose lives consist of beautiful women and glossy corporate buildings) during their business dealings is painfully obvious. With his appearance, however, Chivo is able to maintain an invisibility that allows him to commit murders with impunity. His off-the-grid existence gives him a freedom that no other character in the film possesses. Eventually, Chivo’s decision to stop working as an assassin, move out of his shack, and contact his daughter suggest a hopeful future. His apology to his daughter is poignant, as he seems to exhibit vulnerability and regret for the first time in the film. But considering the fates of the other characters, his return to society begs the question: does his “new beginning” simply represent a re-entrenchment in societal and bodily constraints?

Through its use of nonlinear storytelling, Amores perros skillfully portrays the pervasive nature of violence inflicted on bodies—blood always seems to linger at the edges, waiting to seep into the frame of every character’s life. The fate of so many fighting dogs demonstrate the expendable way that animals are treated, while Susana and Valeria’s male partners coercien exhibits the sexual violence that women of all social classes must endure. Though the power dynamics between men and their wives are hardly balanced, Octavio and Ramiro, too, are vulnerable to physical violence and a lack of control over their own lives: despite Octavio’s moral superiority to Ramiro, both characters end up spiraling out of control and suffering severe physical injuries as a result. Chivo’s guerrilla lifestyle provides a welcome relief from the routine subjugation that every other character in the film endures, but it seems unlikely that he can maintain his freedom as he re-enters civilized society.

At its core, Amores perros is a fascinating exploration of the ways in which individuals of disparate social strata are governed by the same corporeal limitations. The reality that one’s body is a prison becomes the motif that defines every character’s life. In his review of Amores perros, journalist David Denby downplays the importance of a traditional temporal frame that moves linearly from the past to the future, noting: “When the social breakdown is general, bad luck hardly seems arbitrary… the three stories are only vaguely related in time, and the emotional result is similar—an uncanny feeling that all this is happening now, was always happening, will always be happening. Only a literalist would demand causality within a malaise”. Indeed, though the tragedies in Amores perros are many, the film’s deft nonlinear narrative makes it difficult to attribute them to any one factor. Even if the car crash did serve as a catalyst, how many of the misfortunes that followed it had merely been expedited? Did the car crash truly ruin everything, or simply widen the cracks that had already existed in each character’s precarious relationship and questionable life decision?