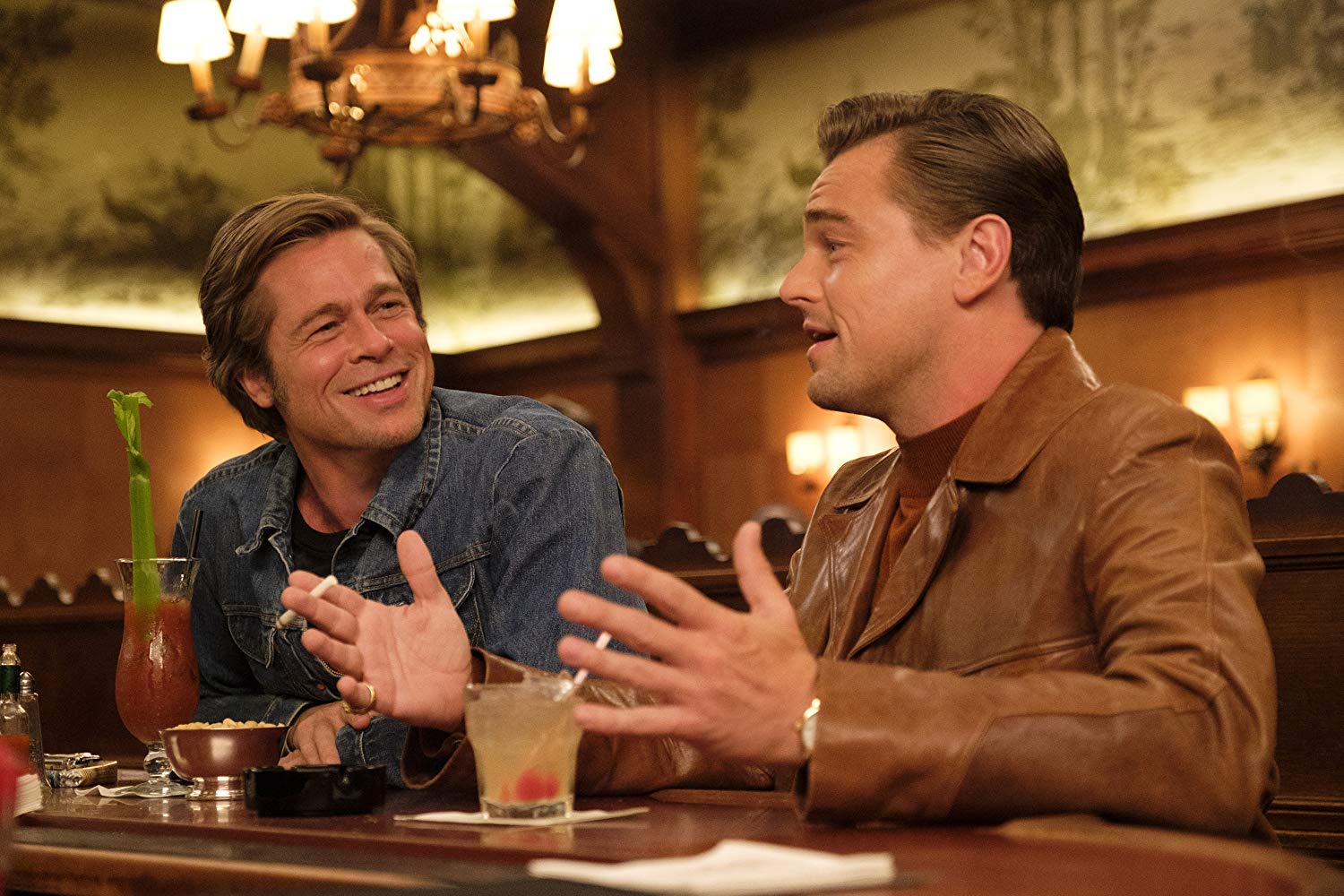 Once Upon a Time… in Hollywood: Tarantino’s Hollywood Ending

Throughout his almost thirty-year career, Tarantino has had two key projects in his filmography. The first (and most often discussed) is his exploration of history through the lens of genre film: World War II through war films, slavery through spaghetti westerns, Reconstruction through Carpenter and Corbucci. The second, and generally more fruitful, are his depictions of the contradictions and peculiarities of adult friendships: Orange and White’s doomed bromance, Vincent and Jules’ theological bickering, even the Bride and Bill’s mutual respect. Once Upon a Time… in Hollywood in many ways represents the culmination of both obsessions, bringing us the end of the hippie era through both sixties pop culture and a friendship between two has-beens. It is also Tarantino’s best auto-critique—and most successful project altogether—since Death Proof.

Picking up in early 1969, Hollywood introduces us to three figures. The first two are the aforementioned has-beens: Rick Dalton, a former TV star now playing villain roles in Hollywood movies, and Cliff Booth, his stunt double who, due to a history of on-set altercations and possible domestic violence, now spends most of his time running errands for Rick. The third figure is their new neighbor: the real-life actress Sharon Tate, having just arrived with her husband Roman Polanski at the house that would eventually become the site of her death. Like in Inglorious Basterds, the presence of this historical figure (with a well-known fate) creates tension right off the bat, with a gloomy inevitability casting a shadow over the proceedings.

Yet surprisingly enough, for about half of Hollywood’s considerable runtime, the specter of the Manson family is all but ignored. Tarantino instead tracks Rick’s day on set, Cliff running errands around town, and Sharon enjoying a day in sunny Los Angeles. Not only is this change a refreshing return to the loquacious sprawl of his nineties work, but the former allows Tarantino to revel in rich period detail. Large stretches of this film simply involve Cliff driving around, listening to radio adverts and pop music (him sailing out of Cielo Drive blasting “Bring a Little Lovin’” makes for one of the years most purely enjoyable mini-moments). Similarly, Al Pacino’s brief appearance in the beginning allows for a hilarious digression about the era’s war films and westerns. But this ambling, digressive structure also allows for genuine self-critique on Tarantino’s part. When a young girl approaches Rick on set and tosses a few questions his way, what little movie-star confidence the man has remaining is absolutely shattered, as he breaks down crying about a pulp novel about an aging cowboy. Tarantino, now 56 years old and decades removed from the era where he blew up the film world twice in three years, has lost his edge—and much like Rick, he’s even become the bad guy.

But it’s Sharon Tate, whose appearances during the film are almost entirely unnecessary in a strictly narrative sense, who provides the genuine heart here. For most of the movie, she’s simply allowed to exist as her own person, free from the impending August night—and it’s perhaps the sweetest thing in his filmography since Pulp Fiction’s flirtatious dinner date. Vide the glorious sequence where she watches one of her own films with a crowd, beaming at the audience’s reaction. Again, arguably pointless in a strictly narrative sense, but in a thematic and emotional sense it’s downright essential. Sharon is portrayed here not as a victim of any sort, but rather, a talented young woman whose career could never properly take off. It’s the best possible tribute she could ask for.

Still, the Mansons do eventually make an appearance, and it’s at this point that the film slowly but surely turns into more traditional Tarantino fare. Initially, Cliff makes a visit to their ranch and has a brief standoff with the clan, but it’s similarly underplayed in the way the rest of the film is, more dryly funny than traditionally tense. Only when the inevitable “six months later” title card arrives do things become capital-T Tarantino, with Kurt Russell narrating the buildup to that bloody night (soundtracked to The Rolling Stones’ “Out of Time,” one of the most brilliant flourishes of the year). This jump can’t help but feel like a bit of a wasted opportunity; Tarantino condensing the events of the offscreen time into a few minutes has its charms, but it also errs close to self-indulgence (and the sequence contains enough great ideas to make you yearn for it to be dramatized in the way the rest of the film was). What this jump does allow for is this film to emerge as a sort of flip on Death Proof, with the self-critique put in the front half instead of in the back. What follows the time-skip is then Tarantino proclaiming—or at least fantasizing—that his best days are still ahead of him, and that even now he’s continuing to break new ground. Right or wrong, it’s an inspiring gesture, and a refreshing jolt of optimism from an auteur too often described as a pop-nihilist.

Yet what sticks out the most in Hollywood—more than the Mansons or the sixties backdrop—is the aforementioned emphasis on friendship. Despite his reputation for being, to put it kindly, an uncomfortable person, Tarantino remains a sharp observer of human behavior, specifically the contradictory aspects, whether it be psychopaths Vincent Vega and Butch Coolidge being tender to the women in their lives or Mr. Orange sacrificing his own life to tell the truth to a dying man. Even Sharon Tate gets a bit of this—her ex-boyfriend spends most of his time with her and her husband, a move that Tarantino treats not as pathetic but as strangely touching, as if Jay’s just happy to be with someone he loves. In that regard, the dynamic between Rick and Cliff is possibly Tarantino’s greatest creation. Cliff does all sorts of menial tasks for Rick for precious little pay, all with the implication that he’s just pleased to spend time with and help out his best bud. Similarly, Rick vouches for Cliff at every turn, trying desperately to get him work even though Cliff almost certainly doesn’t deserve it. When Rick and Cliff exchange their last lines in the film, there exists a great deal of ambiguity surrounding them and their context (I will say no more). But the mix of unease of sorrow, offbeat humor, and cautious optimism in their final exchange is what makes Hollywood—and Tarantino—so special.

Spencer Rider was born in Richmond, Virginia. He fell in love with movies watching Alfred Hitchcock classics in middle school and never looked back, taking in a particular interest in writing about them. A devotee of Wong Kar-Wai and Martin Scorsese, Spencer believes that cinephilia is not just a passion but an ongoing project, furthered through a commitment to scholarly criticism and discussion.