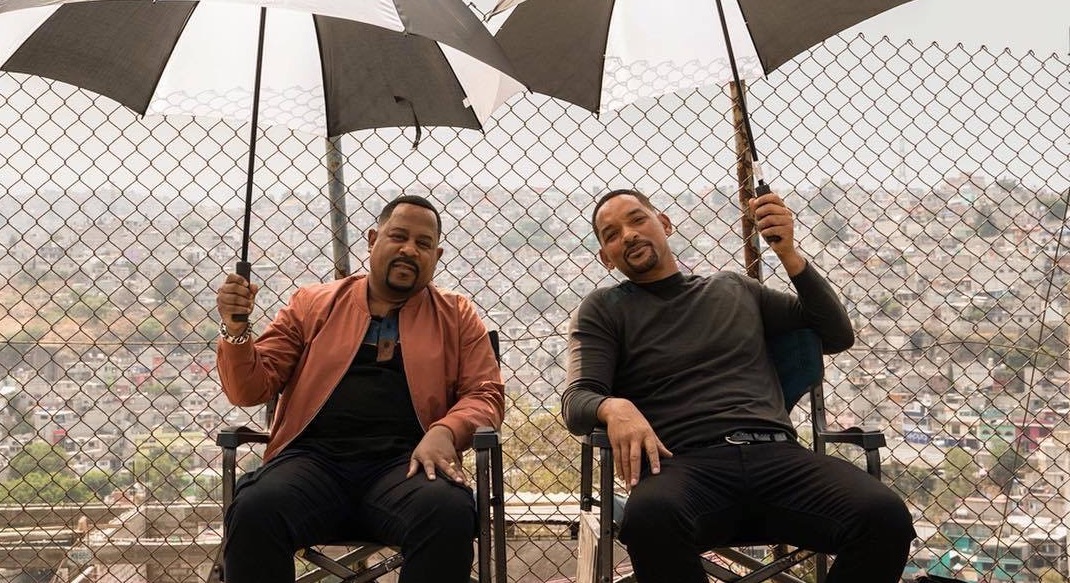 It seems a bit strange to see a Bad Boys sequel in theaters in 2020. The last entry in this action film series, Bad Boys II, was released seventeen years ago, and both of its leading men (Will Smith and Martin Lawrence) are now in their fifties. However, Hollywood producers these days don’t seem to care how much time elapses between sequels, and they certainly don’t seem to mind if the actors are reaching middle age or beyond. Thus, we find ourselves with Bad Boys for Life, a film that offers all the action thrills audiences expect, which also surprisingly addresses the issue of old age.

The film wastes no time in setting up its premise: after a prison escape lifted from Silence of the Lambs, cartel boss Isabel Aretas (Kate del Castillo) sends her son Armando (Jacob Scipio) to assassinate all those responsible for her imprisonment. First on Armando’s hitlist is Detective Mike Lowrey (Smith). Lowrey survives Armando’s assassination attempt and tries to lure his former partner, Marcus Burnett (Lawrence) out of retirement to track down Armando and bring him to justice. To aid in his search for Armando, Lowrey teams up with AMMO, a police task force run entirely by younger millennial officers, to find clues that could lead to the mysterious assassin.

This may seem like a predictable and routine action movie plot, and it is. Lowrey and Burnett deliver the same gleeful police brutality and lamebrain sexist humor that they did in the previous two Bad Boys films. If you want to see Will Smith stylishly brutalize suspects and criminals alike or hear Martin Lawrence crack tired jokes about his stereotypical shrew wife, Bad Boys for Life is eager to deliver. Belgian directing duo Adil & Bilall take over for Michael Bay this go-round and present a pretty good recreation of Bay’s flashy music video style. There are big chase scenes, a plethora of gunfights, and more dramatic sweeping camera movements than you can shake a stick at.

While on the surface, Bad Boys for Life may seem like any other shoot ‘em up action movie, there’s some surprisingly thoughtful commentary on old age and dying. The movie makes no bones about the lead duo’s age; Burnett attends the birth of his grandson and decides to retire from the police force to enjoy his remaining years. This becomes a division between the titular bad boys, as Lowrey wants to continue his danger-filled, womanizing lifestyle, even into middle age. In one of the film’s few successful comedic bits, a series of match cuts crosses between Lowrey preparing for work and Burnett preparing for a day of lazing around the house. Moments like this illustrate the underlying conflict in the film: the choice of whether to accept old age or attempt to hold on to youth.

Old age is further explored from the angle of generational conflict when Lowrey teams up with the young members of the AMMO police squad. The youthful cops prefer a cautious approach to investigating, a method intended to leave behind much less collateral damage than Lowrey’s brash, guns-a-blazing approach. This causes conflict, as Lowrey’s insistence on his old-fashioned ways often sabotages his own search for Armando. While the film clearly relishes in the action-packed results of Lowrey’s excessively violent approach to police work, it’s interesting to see a film in a series dedicated to gunfights and explosions hint that perhaps gunfights and explosions aren’t the right way to solve crimes.

The discussions that Bad Boys for Life broaches regarding old age aren’t necessarily profound—this isn’t a reserved reflection on life like one might find in a quiet, somber arthouse film—but it’s interesting to see a lunkheaded action series even raise the subject of aging. The first third of the film in particular takes the time to explore these themes, even halting the action-packed plot for several minutes for the leads to discuss old age and mortality while at a bar. This scene gains even more profundity as Armand attempts to assassinate Lowrey directly afterwards. The film takes its time to communicate the impact of Lowrey’s brush with death on him and his loved ones. And although the eventual barrage of action sequences muddles these explorations, they still cast a somber tone that hovers over the whole film.

Other action movies have slowly begun to address their stars’ age. Most notably, Creed, the spinoff of the long-running Rocky franchise, includes a plot point about aging boxer Rocky Balboa’s battle with cancer. Others, like the Mission: Impossible series, the John Wick films, or the myriad Liam Neeson actioners of the 2010s are content to ignore their stars’ increasing ages. It’s not likely that Tom Cruise’s death-defying spy, Ethan Hunt, will ever discuss his fears about old age or even death. However, it seems like a small but growing number of films are willing to address the increasingly elderly elephant in the room.