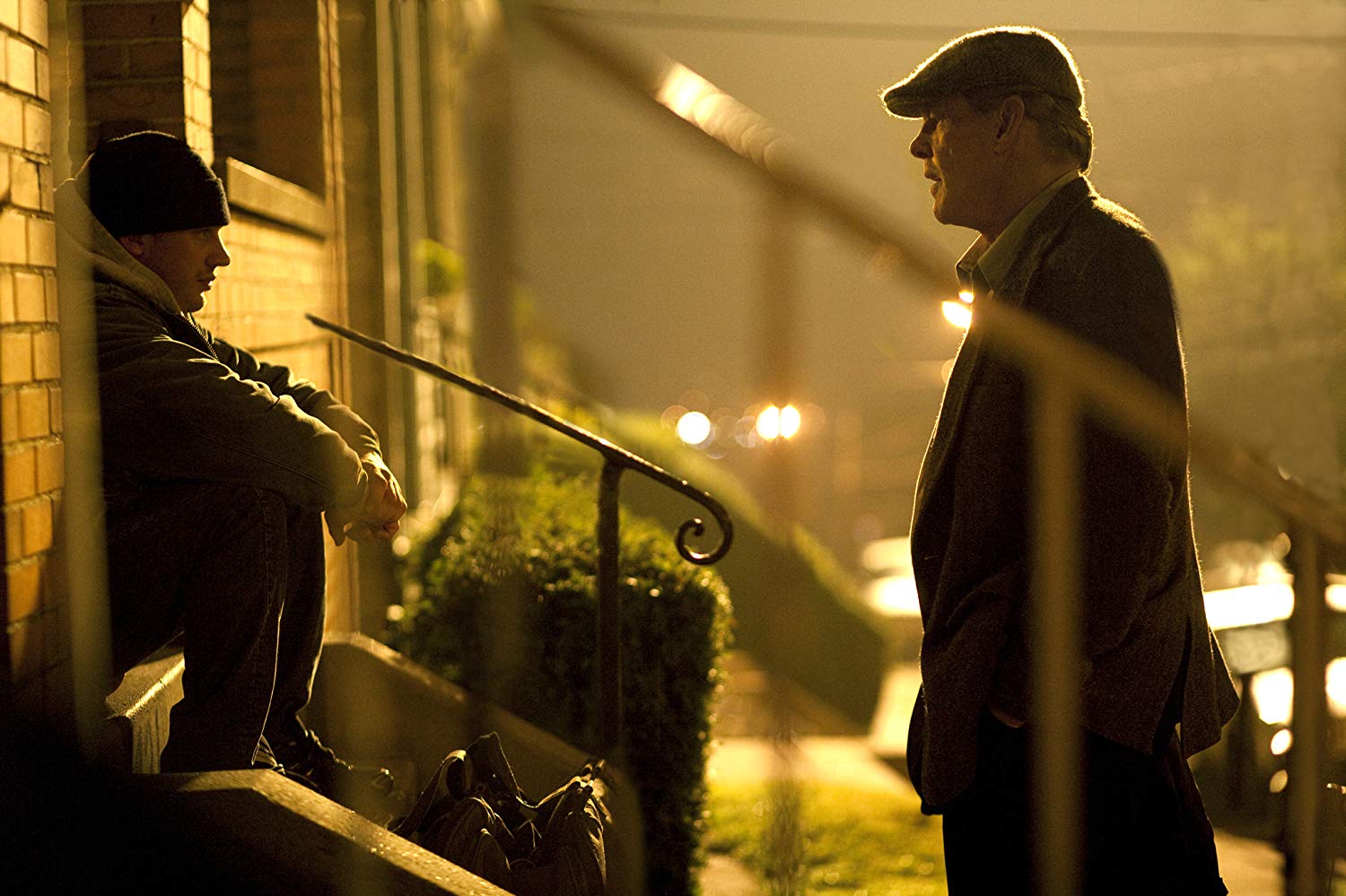 “Today you were far away”

One of the most beautiful embraces in Warrior (2011) is between two brothers. Two brothers who had gone years without embracing each other or seeing each other’s faces. They were complete strangers, each with their own families who helped them forget about the gigantic void that was left after their father drove them apart. After the fight of their lives, the big brother holds his little brother in his arms, caressing him and protecting him the way he should have years prior. The emotion of Warrior is what makes it a great sports movie: its stakes determine more than just the results of a mixed martial arts match.

It’s no surprise to me that most of the films that affect me most revolve around family. One of my screenwriting professors once said that family drama inherently carries heavy dramatic weight. But for me, family has always been synonymous with light. My siblings, parents, cousins, aunts, uncles are all fundamental to who I am. They are in my thoughts, dreams, and poems constantly. I thought, and still do to some degree, that my family would be eternal. For years, we were this great force, pieces of a grand puzzle that would always be pulled together by our love for one another, though life would scatter us across the world. But things have changed in recent years. The legendary family we once were is a distant memory. Time passed, and the doubt of whether our lives will ever feel the same persists.

While watching Gavin O’Connor’s Warrior, I could not help but think of my own story. It begins after a long period of separation—time has passed since the Conlons were ever a family. Tommy Conlon (Tom Hardy) comes home to see his father Paddy (Nick Nolte), and they resume training for MMA (mixed martial arts). Brendan Conlon (Joel Edgerton) lives on the other side of Pennsylvania, struggling to make ends meet, and turns to MMA to make more money. The men of the Conlon family are pieces of a life that has faded and can no longer be. Though Paddy tries to mend the fences he knows he broke, the hearts of Tommy and Brendan have become calloused. Tommy wants nothing to do with Paddy as a father and no longer regards Brendan as a brother. Brendan, too, does not want his father to come around to his home or meet his children. Though we can see the bitterness in the eyes of these broken men who have only traumatic memories of their father, as the audience, we also just want the Conlons to forgive each other. But the reality is that their resentment may be their only way to survive.

Warrior makes a point of showing us how Paddy Conlon is now, compared to how Tommy and Brendan describe him in the past. The film opens with scenes of Paddy in church, going to Alcoholics Anonymous, finding comfort in listening to Moby Dick on audiotape, and being a gentle person overall. Nick Nolte plays Paddy with incredible vulnerability as he portrays a father trying to mend the wounds that he opened years ago. In some ways, time has been kind to Paddy Conlon. He’s no longer the abusive, violent man he once was. He was allowed the opportunity to grow and blossom because he was not on the receiving end of his toxic abuse. For his sons, however, the time that passed simply built up their scorn for their father—likely a defense mechanism to prevent themselves from being hurt and let down yet again. When we listen to Paddy’s shaky voice, always sounding like he is a few seconds away from crying as he begs his sons for forgiveness, our first instinct is to sympathize with him. But one look at the scorn in Tommy’s face when he looks at his father and the indifference in Brendan’s eyes reveals that Paddy’s past sins may be too great.

Tommy Conlon walks with his head bowed and his shoulders slumped. The enormous weight of a difficult family life took a physical toll: not only did he deal with an abusive father, he also carried his mother through cancer. Brendan stayed behind with Paddy and his girlfriend after he left their violent home with his mother. Tommy’s posture and general propensity for vindictive anger (apparent in his verbal abuse of his father and his explosive sparring style) draw a sharp contrast to the happy, cheerful kid we see in the home videos that Paddy watches at the start of the film. However, there is light in Tommy. He grins ear to ear when he talks to the family of his buddy from the Marines. There is genuine affection between them, and layers of love in the relationship of Tommy and the person he considers his real brother. In Tommy’s eyes, however, his blood family no longer deserves love and affection.

Brendan Conlon is the oldest son. He does not carry as much rage and hate as Tommy because he has a family of his own. He has more to worry about than his past: his youngest daughter needed open heart surgery and as a result, his family is on the brink of losing their home. He is fighting literally and figuratively for the survival of his family. But Brendan’s yearning for reconciliation is evident throughout Warrior. When it comes to his younger brother, Brendan wants to fix the broken parts of their relationship. His guilt for his role in damaging it in the first place is enough for him to try to reason with Tommy. For Brendan and Paddy, part of the cold bitter tragedy of familial heartbreak is realizing the ease with which everything could have been avoided.

Warrior is a film about fighting. Tommy and Brendan were trained by their Marine father as boys. Each fight draws a clear picture of their characters. Tommy’s fights are quick and violent: he lets his rage explode and wreak havoc on his opponent. Brendan begins his fights slowly, sizing his opponent up and eventually exploiting his weakness in a submission hold. The most important fights in Warrior, however, aren’t the physical ones, but the ones that occur every time the Conlon family crosses paths. Tommy talks to his father and brother like he wants to crush their hearts with every sentence. In the first scene in which Tommy and Brendan meet face to face for the first time in the film, they walk towards each other slowly on a beach. The tracking, music, and lighting indicate an imminent showdown. Years of agony and bitterness come shuddering to their faces. Tommy is relentless: he brings up Brendan’s every mistake, rejects his attempts to apologize, and refuses to call him his brother or acknowledge his daughters as family. Tommy’s actions goes against every belief I have about how you treat family. Tommy is like a little kid who only knows that he suffered too much and cannot suffer like he did in the past again. He treats Paddy the same way he treats Brendan. Every time Paddy extends an olive branch, Tommy shuts him down and mocks him for thinking anything could be remedied. He ridicules the man Paddy has become, driving Paddy to break his sobriety. The worst part is that as cruel as Tommy is being, as much as we may want him to let his walls down, he is not in the wrong. Tommy should be able to make the decision about who he forgives and who he allows into his life. It’s just disheartening to witness this family being torn apart, with seemingly no chance of light on the horizon.

By the time the resolution of Warrior arrives, I’m already sobbing. Tommy refuses to give into Brendan in the final fight of the tournament. Brendan faces the prospect of hurting Tommy badly or even killing him to win the fight. There’s a moment where Brendan pounds Tommy’s wounded shoulder horribly. Tommy starts crying, finally unable to hide behind his stoic face and hurtful words. Paddy can’t look away, realizing the point to which he drove his sons, who are at the top of the professional fighting world but killing each other out of resentment. Brendan does not like what he has to do, but he sees his wife and remembers that his family needs him. He looks at Paddy, who gives his son a nod to tell him that something has to give for the family to have any chance of healing. The National’s “About Today” starts playing. The whole world is watching. Brendan has Tommy in a choke hold where Tommy can’t run from him anymore, and finally, he says, “I’m sorry Tommy. I’m sorry. I love you.” These words hit my heart like bullets. Because, despite all pretext and reasons, whether valid or invalid, raw love between these two brothers exists. Tommy taps out and loses, Brendan wins. Chaos ensues. The whole arena scrambles. But Brendan covers his brother, still lying on the mat, protecting him. He embraces his younger brother, touches his face, and whispers to him. Tommy takes in his older brother’s words and accepts them. They leave the ring together, with Tommy in his brother’s arms and Brendan leading the way.

I was crying by this point of the film because it felt like the Conlons were too far gone. Everything in Warrior indicated that it was too late, that time had destroyed any chance of reconciliation. It’s maddening to think that such a strong bond as family can break so suddenly and beyond repair. Maybe we expect family to fix itself. Maybe we feel that, with time, all will be forgotten and forgiven. But Tommy and Brendan fought to get their family back. Time does nothing but make it easier to forget the other person and become accustomed to the new void in your life. But I look at old pictures and reread the old notes I wrote to members of my family back when we thought we would always be in each other’s lives. I don’t know what it would take to fix things. I do not know who would have to put who in a submission hold so that we could finally be face to face and tell each other everything we’ve been wanting to say for years. But watching Warrior makes me think it’s possible.