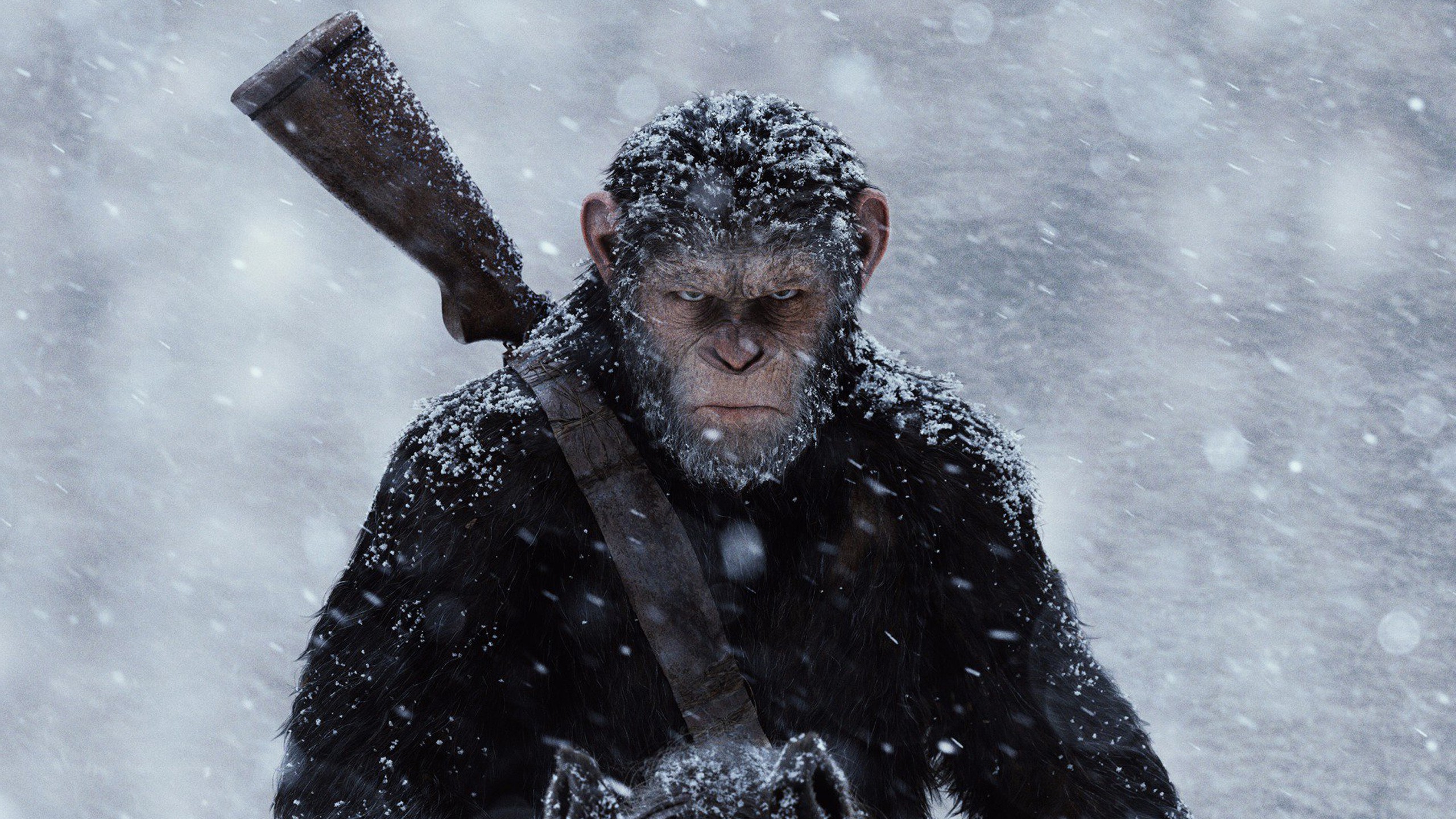 A Planet of Apes by Default

“I did not start this war”

“I did not start this war. I offered you peace. I showed you mercy. But now you’re here. To finish us off… for good.”

Typically in the Planet of the Apes franchise, humans have struggled for superiority while the apes have struggled to survive. Matt Reeve’s War for the Planet of the Apes is no different. The viewer catches up with Caesar the chimpanzee and his tribe of apes as they are hunted by the militarized group Alpha-Omega, led by the Colonel (Woody Harrelson). After the Colonel launches a stealth attack on him and his family, Caesar is filled with a hate that drives him to leave his tribe to kill the Colonel on his own terms. The story is then set up for the final showdown between man and ape, a fight to dominate the planet—as promised by the previous two films and the trailers.

Or so I believed.

Allow me to clarify. Matt Reeves did an incredible job with this film in many different respects. The personifications of the apes as living, breathing beings, the camerawork, and the hatred that radiated off of so many characters, for example, were impressive. There were many moments throughout the film where I wanted to cry because of the trilogy’s success with establishing emotional gravity—especially with the apes’ devotion to Caesar. Caesar has made it clear that he would give up his life to protect the apes, a heroic quality that distinguished him from Koba (the hateful ape from Dawn). And in return, the apes show an astounding willingness to put their lives in his hands. Nothing compared to the look in so many of the apes’ eyes when they looked at Caesar; indeed, the apes’ commitment to Caesar is something that took my breath away during many moments throughout the film: Rocket not wanting to leave Caesar on his own; the apes putting up with the Colonel’s abuse to prevent Caesar from being tortured; and Red the Gorilla being so inspired by Caesar’s bravery that he finally sees the error of his ways. The apes’ devotion to Caesar may be the reason why the audience loves and roots for him too—Caesar is an honorable leader, unlike so much of what we see in our lives today. Furthermore, with the inclusion of the character Bad Ape (Steve Zahn), War also succeeded with establishing a comedic balance in the film. This new character added levity through sweet, tender moments in addition to the scenes between Maurice the Orangutan and Nova, a human girl they come across, and Caesar with his son Cornelius after their entire family was killed by the Colonel. The camerawork was also a force to be reckoned with. I felt actual goosebumps when I saw the shot of the apes on horses at the beach. The orange hue, the crisp reflectiveness of the water, and the small silhouettes standing out in the warm sunset made me feel like I was watching an epic, something that I wanted to look at for hours to absorb all the beauty in the frame. Finally, Andy Serkis’s acting went above and beyond as Caesar. While audiences have seen his talent before, never has Caesar the chimpanzee required such conflicting emotions. The way War portrayed Caesar as a character privy to failure makes him that much more of a dynamic role model.

In many ways, War for the Planet of the Apes was a masterpiece. But something lingered on my mind as I walked out of the theater. Though the film’s bittersweet ending provided closure to the tale, I was not as blown away as I was with Rise and Dawn of the Planet of the Apes. Then I thought about the film’s title: War for the Planet of the Apes. It promises a grand battle between man and ape that will result in one species taking over the planet. But we did not get to see that war unfold. Instead, a subplot about a disease rendering humans mute and insane (and ending human intellect as we know it) was enough to divide the humans to the point that they kill each other off, resulting in the titular war. In the end, that was not good enough for me. The title of the film made me believe that the war was going to be for the apes to take over the planet to ensure their survival; that was the war I was expecting to see. I felt that that was the war that the entire trilogy was setting up throughout all these years.

By the end of War, two things had become clear: human beings were killing each other off due to their own petty differences (a flaw of human nature), and apes end up inheriting the earth due to surviving what killed the previous dominant species. But again, what the trailer and title promised was that the apes were going to win the planet from the humans through victory. In the end, however, the fate of the planet was decided by nature instead of being won in battle. This is what left me restless. It was something that I could not defend and that did not leave me satisfied in the same way that Rise and Dawn did. Each of those films played their role in this science fiction franchise: Rise explained the suffering of apes by the hands of man and their fight to release themselves from captivity, while Dawn set up the post-apocalyptic world inhabited by ape and man, whose inevitable conflict becomes a reality after their paths cross. By every estimation, the next step would be to bring the entire franchise to a climax, where man and ape—no longer able to ignore the other—fight. Instead, War turned out to be a combination of the two previous films. The first act of the film reflects Dawn, with the cold tension between ape and man set off by an act of violence. The film also ends similarly to Rise, where the apes escape captivity once again to find a better home for themselves while the humans put themselves on the path to destruction. In my opinion, the franchise completely regressed as the film came to its climax and fell short of the impact it could have had.

There are many explanations as to why War for the Planet of the Apes ended the way that it did. It could have been to paint the apes as morally superior to humans and to show that the apes would not give into savagery and hatred simply to survive. This is why Caesar releases the human hostages captured at the start of the film and sympathizes with Nova after initially acting indifferent towards her. The apes do not want to take over the planet, they simply want to live in peace. When you contrast their benevolence with the ignorance and inhumanity of the Colonel’s Alpha-Omega organization, the viewer cannot help but see the apes in a better light and want to root for them. On the other hand, since nature interfered with the plans of both the apes and humans at every turn, maybe the filmmakers wanted to make nature its own character in the film. Nature was responsible for not only the disease that tore the humans apart, but also the avalanche that became a test of survival that the apes passed at the end of the film. It was the destructive nature of man that enslaved the apes. It was nature that chose the apes as the dominant species of the planet. It is almost poetic when you see the path that Caesar and his tribe took from Rise to War, as a group of apes that together inherited the earth. But in my opinion, the effect of this film could have been elevated 100 times more if it went in another direction. If, for example, humans gave Caesar no choice but to organize and fight. If humans at the last second understood and surrendered their place in nature. If man and ape fought to destroy because they knew neither could live while the other survived. Those ideas are a lot more compelling than simply rehashing a concept that Rise already established.

Again, I very much liked War for the Planet of the Apes. There were so many things to appreciate about Matt Reeves’ film, and the performances from both the humans and apes were both wonderful and brutal to witness. Everything that made the first two films great made War even greater. At certain moments in the film, I thought I had decided that it was the best in the Planet of the Apes franchise. But I would be lying if I said I did not leave the theater disappointed and scratching my head as to why. Many people say they loved this film and could not imagine it going another way—I wish I were one of them.