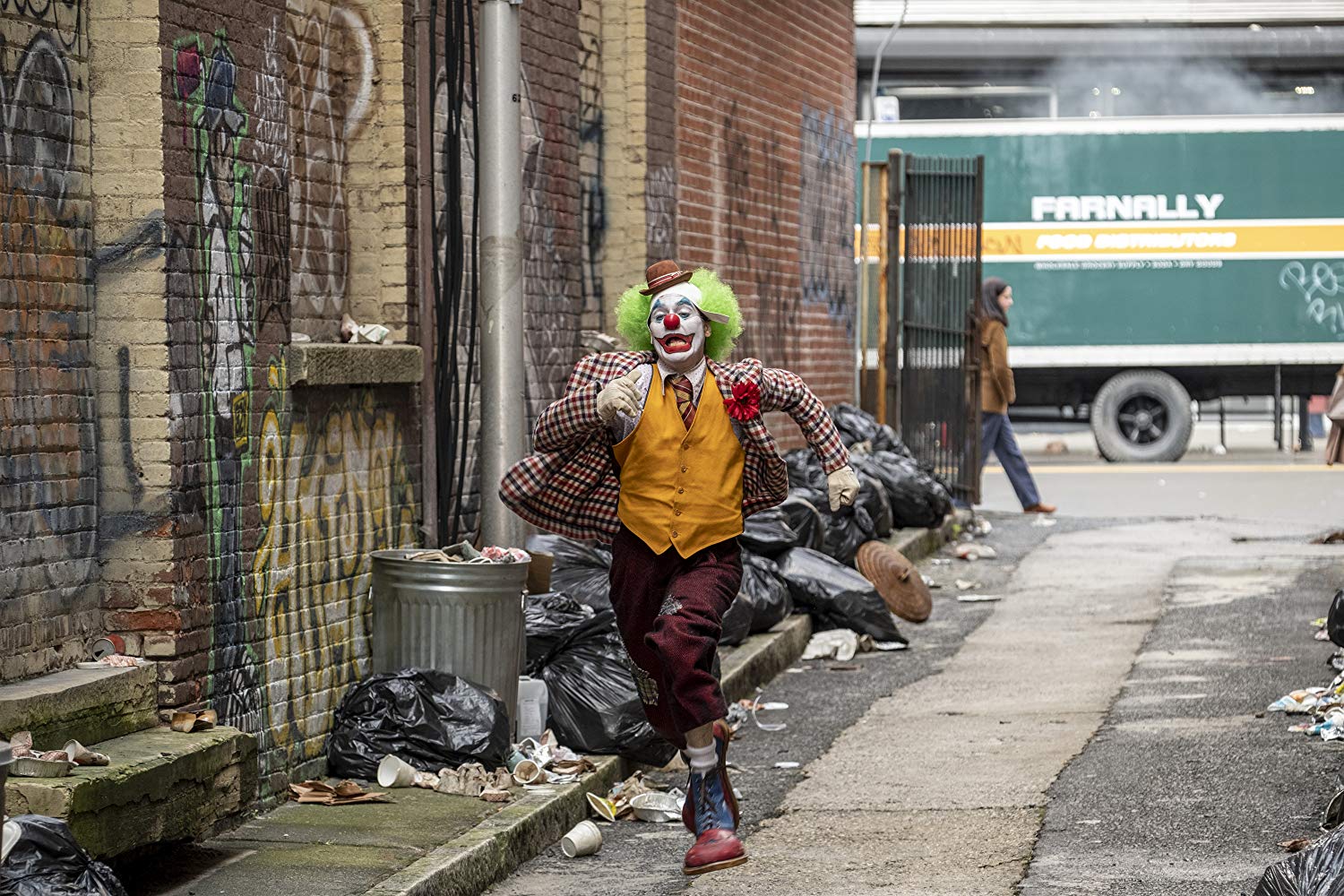 Joker: A Mess, But An Interesting One

I am of the opinion that DC’s superhero movies will always be more interesting than Marvel’s superhero movies because every film DC releases is different from the last. Marvel has constructed its own brand, so when you go to a Marvel movie, you always know what kind of story and what caliber of storytelling to expect. DC, on the other hand, is wildly inconsistent across the board, so you never quite know what you’ll get. Such is the case with Joker, a self-styled counterpoint to the special effects extravaganzas that dominate the box office. It’s a small-scale character study focusing on one man’s descent into madness and violence. It’s also plagued by delusions of grandeur, which makes for an uneven but thoroughly fascinating film.

Before the film even starts, Joker makes its intentions clear. The film opens with the 1970s Warner Brothers logo, rather than the current one—the first of many throwback references. Set in the early 1980s, the film emulates the tone and narrative of many gritty crime dramas of the time. In particular, this film homages the Martin Scorsese films Taxi Driver (1976) and The King of Comedy (1982), which both center on disenfranchised loners who gradually become violent.

Similarly, Joker finds its protagonist, Arthur Fleck (Joaquin Phoenix) in the middle of a downward spiral. Things just aren’t going well for him: he’s dealing with a bevy of unspecified mental illnesses, struggling to care for his ailing mother, and in danger of losing his job as a clown-for-hire. To make matters worse, he also has a rare medical condition known as pseudobulbar affect, which causes him to laugh uncontrollably at inconvenient times. It feels like the writers of Joker purposefully dug through books of rare medical disorders to find a real condition they could use to justify one of the Joker’s cartoonier qualities. Arthur wants more than anything to be a famous stand-up comedian, particularly so he can perform a guest spot on his favorite late-night talk show. This last plot point happens to be nearly identical to the premise of The King of Comedy. Since Joker is nothing if not unsubtle, King of Comedy star Robert De Niro appears in a meta role as Murray Franklin, the talk show’s host.

Joker is interesting because it desperately wants to say something deep about society, but it isn’t sure what it wants to say or how to say it. Fleck deals with depression, psychosis, and anger issues throughout the film, but it feels like the film uses these serious topics to appear more mature than its superhero movie counterparts. The extent of the film’s commentary on Fleck’s mental state is a moment where he marks up a sign that reads “Don’t Forget to Smile” so that it reads “Don’t Smile”. About midway through the narrative, Fleck finds out that the social services program he attends and receives medication through has been defunded as part of citywide budget cuts. In another movie, this might have been a moment to examine the way that American society often overlooks social services and other resources for those who suffer from mental illness. Instead, this plot point only serves to give Fleck a reason to act even more unhinged than before. Taking these serious issues and trivializing them for the sake of plot convenience almost feels distasteful. However, the rest of the film is so inept at handling weighty content that this feels more like the result of cluelessness on the part of the filmmakers rather than callousness.

The film also attempts to make political commentary by drawing comparisons between the troubled city of Gotham in the early eighties to today. Early in the film, Fleck, dressed in his clown costume for work, is attacked by a group of drunken stockbrokers on a subway train, who pummel Fleck while singing the show tune “Send in the Clowns”. He finally snaps and shoots his assailants. The news interprets this act of violence as a political statement against the rich which inspires protestors in Gotham city to riot and don clown masks in tribute to Fleck. The numerous shots of masked protestors clashing with police seem to be deliberately evoking imagery of current-day protest groups like Antifa. However, since the film doesn’t know what it’s trying to accomplish with the protesters, it winds up feeling like more empty provocation.

In the weeks leading up to the release of Joker, journalists and media outlets raised significant outcry over concerns that the film might inspire others to commit real-life acts of violence. However, Joker is so toothless and hollow in its portrayal of violence and political protests that the only thing it has managed to inspire are a series of internet memes. It appears that viewers, specifically white male internet users, have latched onto the more absurd moments in the film, such as the scene where Arthur dances down a flight of stairs on his way to appear on Murray Franklin’s talk show, rather than the moments of attempted political commentary.

Because Joker is a character study, it’s worth discussing Joaquin Phoenix’s performance. It’s not a bad performance, but Phoenix’s physical presence and appearance are thoroughly off-putting. He seems to have lost a worrying amount of weight for the role, appearing skeletal and sickly in the numerous scenes where he dances around in his underwear. He also seems to be recycling much of his quiet performance from indie crime thriller You Were Never Really Here (2017), where he played a similarly disturbed, violent loner. Phoenix somehow manages to overact by underacting. He mumbles through his lines with an airy, strangely perverse, childlike delivery. He also moves in an inexplicably balletic manner, as if he’s dancing his way through the film. When he eventually appears on late-night TV in his Joker persona, he ramps up into campy histrionics, sounding like a drag queen riff on Joan Crawford during his monologues about society’s wrongdoings. It’s a bizarre role when compared to other screen portrayals of the character, and I’m still not entirely sure what to make of it.

Given that Joker won the award for Best Film at this year’s Venice Film Festival, it seems likely that the film’s producers will push this as an Oscar contender next year. In fact, the film feels like the world’s strangest Oscar-bait film. It exudes self-seriousness, from its ponderous, delicately lit cinematography littered with slow-motion shots, to its lip service to weighty thematic material. But ultimately, it winds up saying about as much about society as any spectacle-driven superhero movie, which is to say, not much at all.

Sure, Joker isn’t good, but it’s fascinating nonetheless. It’s best viewed as the product of a market oversaturated with superhero films. Producers and fans alike have bemoaned for years that superhero films get little attention at the Academy Awards, and Joker seems like a misguided attempt to engineer an Oscar-ready superhero film. It gears itself up for awards season by shedding any trace of comic book qualities.

Aside from a handful of scenes involving a young Bruce Wayne and his parents (with a shoehorned in origin-story scene to remind you that this is still in some way related to Batman), Joker is barely identifiable as a superhero-adjacent movie. To appeal to the Academy and fans who still want gritty interpretations of superhero characters, Joker shamelessly borrows from other, better, crime films and passes it off as a bold and daring take on the Batman mythos. You can apply as many layers of grit and dour attitude as you want, but at the end of the day, this is still a movie based on a comic book villain who looks like a clown and fights a man in a bat costume.

In films like Taxi Driver and The King of Comedy, the antihero protagonists work because they have clear motives. Travis Bickle in Taxi Driver wants to save a young girl from a human trafficking ring, even at the risk of his own life. Rupert Pupkin in The King of Comedy wants to be a late-night talk show host, and will stop at nothing to achieve his goal, even if it means committing crimes like kidnapping. In Joker, Arthur Fleck stumbles his way toward a set of vague goals. He wants to be on TV, and eventually achieves that, but not through any direct action of his own. At one point, Fleck even says, “I don’t believe in anything”. If the protagonist of a film doesn’t care about or believe in his own goals, why should we as an audience?

Given that Joker has broken several box office records, it seems that gritty superhero films are still viable. It will be interesting to see if this film’s success leads to other gritty, po-faced takes on characters from the Batman rogues gallery that are even more ridiculous than the Joker himself. Perhaps we’ll see a movie based on the Penguin, where a man shunned by society decides to inspire a bird and umbrella themed-uprising. Or maybe even a movie based on Man-Bat, where a mutated mad scientist chooses to fight class inequality. Only time will tell.