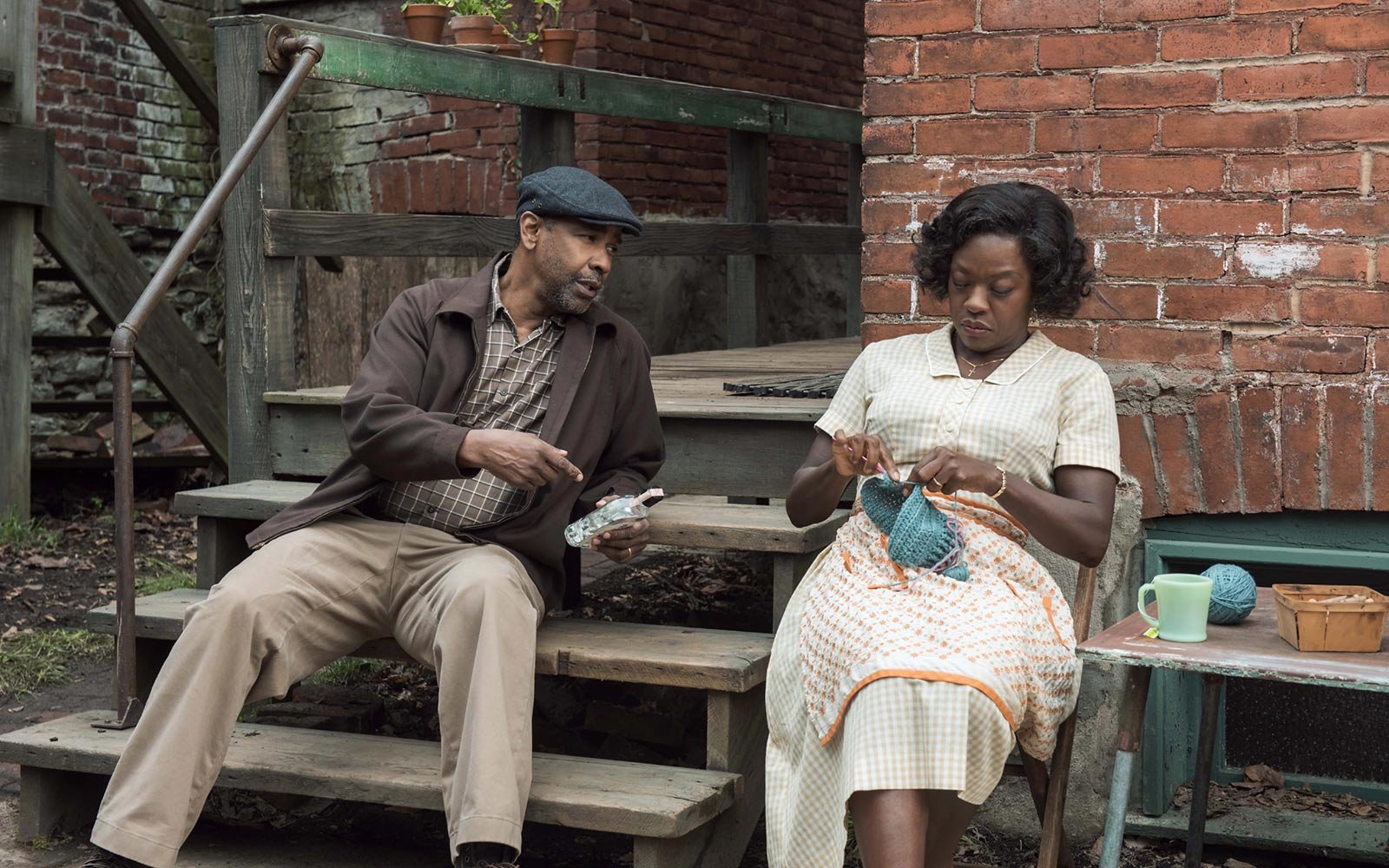 August Wilson’s Words Live on the Screen in Fences Adaptation

Over a decade after two-time Pulitzer Prize winning playwright August Wilson’s death, his most celebrated work, Fences, has finally made it to the silver screen. Although the process took longer than expected, due in part to Wilson’s insistence on having the work directed by an African-American, the end product shines with Wilson’s original dialogue at the forefront of Denzel Washington’s (The Great Debaters, Antwone Fisher) direction.

Fences tells the story of Troy Maxson (Denzel Washington), a garbage man who lives in Pittsburg with his second wife, Rose (Viola Davis), and their son, Cory (Jovan Adepo). Troy’s troubled past and short lived baseball career lead to a stilted relationship with his son and an unfaithful marriage. However, Troy’s routine interactions with his good friend and coworker, Bono (Stephen Henderson), his first son, Lyons (Russell Hornsby), and his disabled brother, Gabriel (Mykelti Williamson), bring balance to his life. But as Cory begins football practice for the new school year, tensions rise and secrets are revealed which lead to explosive interactions with disastrous consequences.

Not many stage plays translate well to the screen; the focus on dialogue over image tends to be the downfall. Denzel Washington’s adaptation is an exception to this rule. With Wilson’s rhythmic words, the dialogue works to drive the film forward, while the instances in which images are purposefully inserted—a rose falling to the ground or the sun breaking through a cloudy sky—distract from the story’s progression. The reason for this success can be attributed to the script, the cast, and the camera.

In addition to his dialogue, Wilson also crafted an exceptional story. The way he was able to transport an audience into the home of an African-American family in the 1950s is remarkable, and Washington’s ability to capture this atmosphere certainly plays into the power of the film. The characters are rich and balanced with memorable pasts and seemingly normal lives that beg to be explored further. The juxtaposition between Troy’s sons, the intimacy of Troy’s friendship with Bono, and the sympathetic situation created through Gabe’s injury all help to shape the lead character, a role any actor would jump to portray.

Which leads to the cast. It’s clear Washington (Flight, American Gangster) and Davis’ (The Help, Doubt) work on the 2010 Broadway production of Fences played a major role in their memorable performances on the screen. Washington’s weight transformation is highlighted through a single shot, when his stomach protrudes to the ceiling, and Davis’ willingness to cover her face in tears and mucus cannot be understated. The delivery of their dialogue, in addition to the rest of the cast’s ability to keep pace with the beat of the text, makes the work come to life. In that regard, this film may have two leads, but it is certainly an ensemble piece. Each of the supporting actors added their own unique voice to the film, and that helped to shape the Maxson family.

In terms of the camera work, the most impressive aspect is in the variances of cinematographer Charlotte Bruus Christensen’s (The Girl on the Train) shots. Due to Fences’ original play form, the scenes are long, but to combat a potentially boring form of storytelling, the camera moved around the room to present one beautiful frame after the next. The dynamic compositions and actor blocking echoed a stage-like atmosphere, while the cuts to close-ups were able to bring the viewer directly into the action, an opportunity not given during a stage performance. Also, the decision to sprinkle in handheld camerawork and shots with shallow depth of field brought about necessary changes to heighten particular moments of the movie.

Two additional elements of the film which are extremely successful but have the potential to go unnoticed are the artistic decoration and the music. It is impossible to credit a single individual with the work that was accomplished for this film’s design, so recognition must be given to the entire artistic team. The opening moments of the film are by far the most cinematic. A moving camera follows Troy and Bono as they ride through the city on the back of a garbage truck. In this single scene, the viewer is immediately transported to the 1950s through the use of a gorgeous period set. As the movie shifts to Troy’s house, the same attention to detail is maintained throughout.

As for Marcelo Zarvos’ (Cell, The Choice) music, the use is rather limited, which creates its power. In theater, music is either used diegetically or for transitions between scenes. In Washington’s Fences, music is used in a similar style, with the occasional overlap of dialogue and non-diegetic sound, which only works to amplify the emotions of the scene. However, more often than not, Washington allows for Wilson’s lyrical dialogue to serve as the only sounds of the film. In this case, less is more to an infinite extent.

There are some missteps with the adaptation. The ending, although emotional and warranted, is too symbolic. A better image could have been utilized to close out the film while maintaining the desired effect. Also, there could have been other liberties taken to make the film more cinematic. This idea stems from the opening scene. As an adaptation, it is memorable, but as a standalone film, the simplicity lessens its significance.

Ultimately, this is a movie which presents a particular time period, place, and group of people, while thoroughly exploring the often complex dynamics associated with families on a universal scale. And for that reason, August Wilson’s words will be forever cemented and shared on his terms, a much deserved honor for such a respected artist.