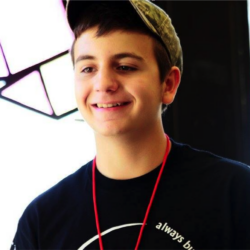 Levi Feil is a 16-year old who has been making films since he was 8. Levi’s first inspiration was the director Larry Blamire, who made spoof movies of classic genres like the horror film. Levi’s grandpa gave him his first camera one Christmas, and he started making films with his little brother. Since then, Levi has entered and won different local film competitions and has been doing freelance video work for local businesses.